A study found youth and high school football players who were hit in the head frequently showed signs of damage to brain development after only one season of playing the sport.

The study, presented at Radiological Society of North America’s (RSNA) annual meeting, observed 60 youth and high school football players over a single football season who did not have prior concussions or histories of developmental, neurological or psychiatric problems, according to RSNA’s press release.

Twenty-four players were determined to be high-impact players while 36 were placed in a low-impact group based on “each player’s risk of cumulative head impact exposure” according to the Head Impact Telemetry System (HITS), which helps collect data through sensors on the players’ helmets.

“The groups were determined after the season of normal play,” Elizabeth Davenport, a co-author, told The Daily Caller News Foundation over email. “We don’t interfere with their normal play or practice.”

Those who experienced a high number of head impacts showed changes in pruning, or the decrease in gray matter volume, according to the press statement.

Pruning gets rid of unused neural connections in the brain, which is vital for healthy brain development. Most impacts to the head occurred during practice, the news release said.

“Disruption in normal pruning has been shown to be related to weaker connections between different parts of the brain,” co-author Gowtham Krishnan Murugesan said in the press statement. “Our study has found a significant decrease in gray matter pruning in the frontal default mode network, which is involved in higher cognitive functions, such as the planning and controlling of social behaviors.” 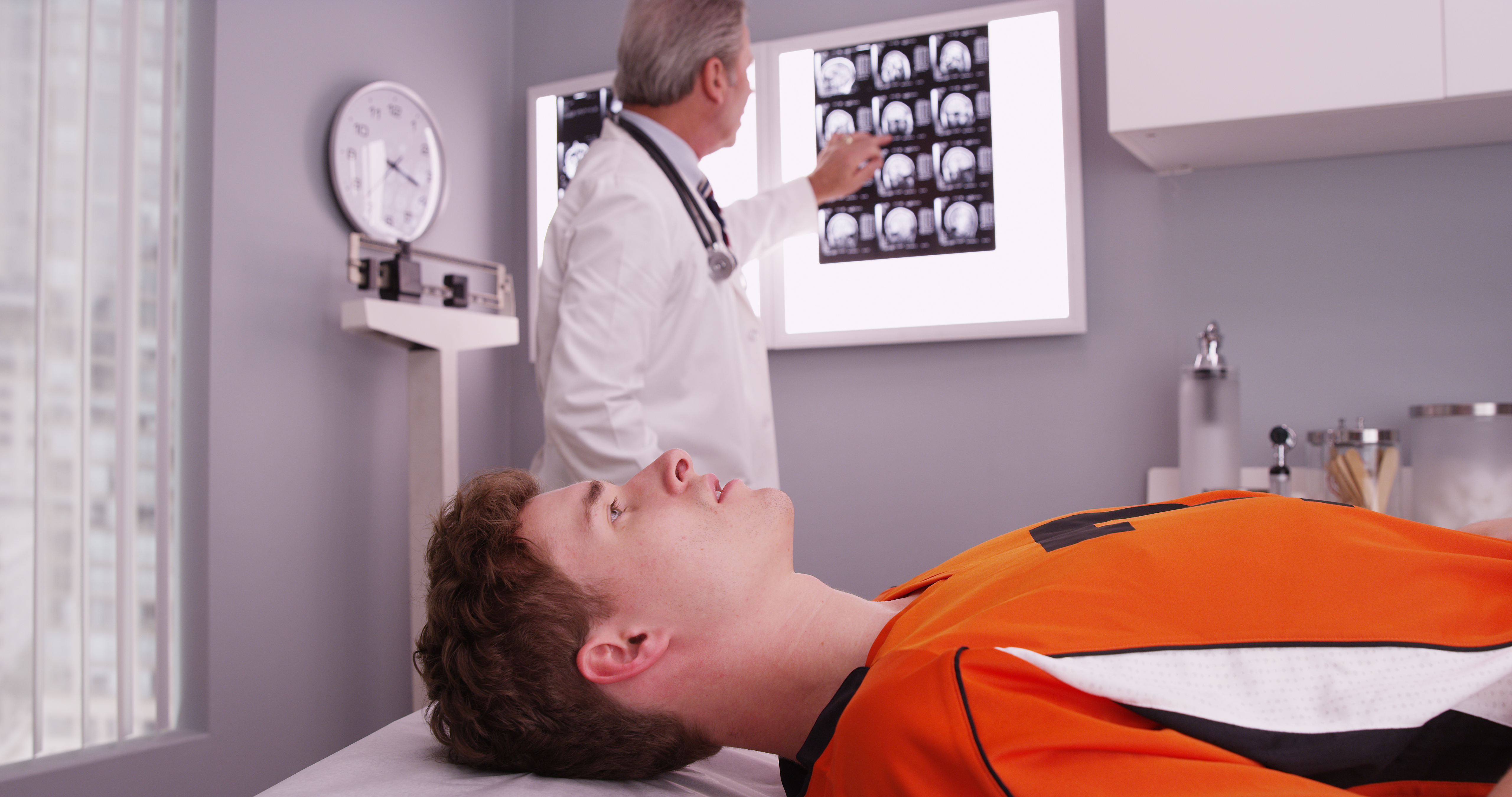 Pictured is a football player lyding down while a doctor reviews his x-rays. SHUTTERSTOCK/ Rocketclips, Inc.

Modifications to the sport, like reducing the number of contact drills, could help decrease the chances of getting hit in the head at full speed, according to the news release. Murugesan added the National Football League’s elimination of the running start in the kickoff was another example of a modification. (RELATED: This College Football Team Should Be Suspended Immediately For Their Horrific Actions)

“We are currently in the process of requesting a renewal of our [National Institution of Health] NIH funding to study these players longitudinally,” Murugesan told The Daily Caller News Foundation. “Now that we are aware that these changes occur, it is imperative that we follow-up and see if there are any long term effects.”

Murugesan and Davenport were two of 11 co-authors.

The researchers of the study are not necessarily giving “clinical recommendations” for whether students should or should not play football.

Chris Nowinski, Ph.D and Concussion Legacy Foundation’s co-founder and CEO, however, said parents should not allow their children to play tackle football before high school.

“The risks to brain development are simply not worth the perceived benefits,” Nowinski told TheDCNF over email.

Previous research by the American Medical Association found 177 former football players, ranging from high school to NFL players, showed some degree of chronic traumatic encephalopathy (CTE). CTE is a degenerative brain disease that has been linked to frequent head trauma.

Another study looking at the long-term risks of playing football found more than 40 percent of former NFL players showed signs of traumatic brain injury, according to Scientific American.

Children who played tackle football before the age of 12 and continued to play in high school would have trouble managing behavior later in life, Time reported.