The Christmas spirit usually banishes fear, but in some countries Christmas brings fear in abundance, trading Santa for ravenous ghouls who feast on children.

The story of the Magi’s visit to Jesus Christ and the historical figure of St. Nicholas gave rise to the tradition of gift giving during the commemoration of Christ’s birth. Holdovers from European paganism, however, introduced traditions of terror and retribution alongside what is otherwise a celebration of the hope of divine mercy and grace for all mankind in Christ. (RELATED: Here’s How Santa Claus Came To Be)

Here are some of those terrifying Christmas traditions of Europe, sure to frighten children into good behavior as though their lives depended on it.

Germany may well have the largest number of creepy Christmas traditions, and Frau Perchta takes the cake as the most macabre. Perchta, also known as Berchta or Percht, is an ancient Alpine Pagan goddess whose followers would don masks of her likeness and wear them in public processions as her entourage, to ward off evil spirits and ghosts, from the last week in December to January 6. When the Germanic regions were Christianized, Frau Perchta and her processions remained as part of Christmas traditions in Bavaria and Austria — traditions that continue to this day. 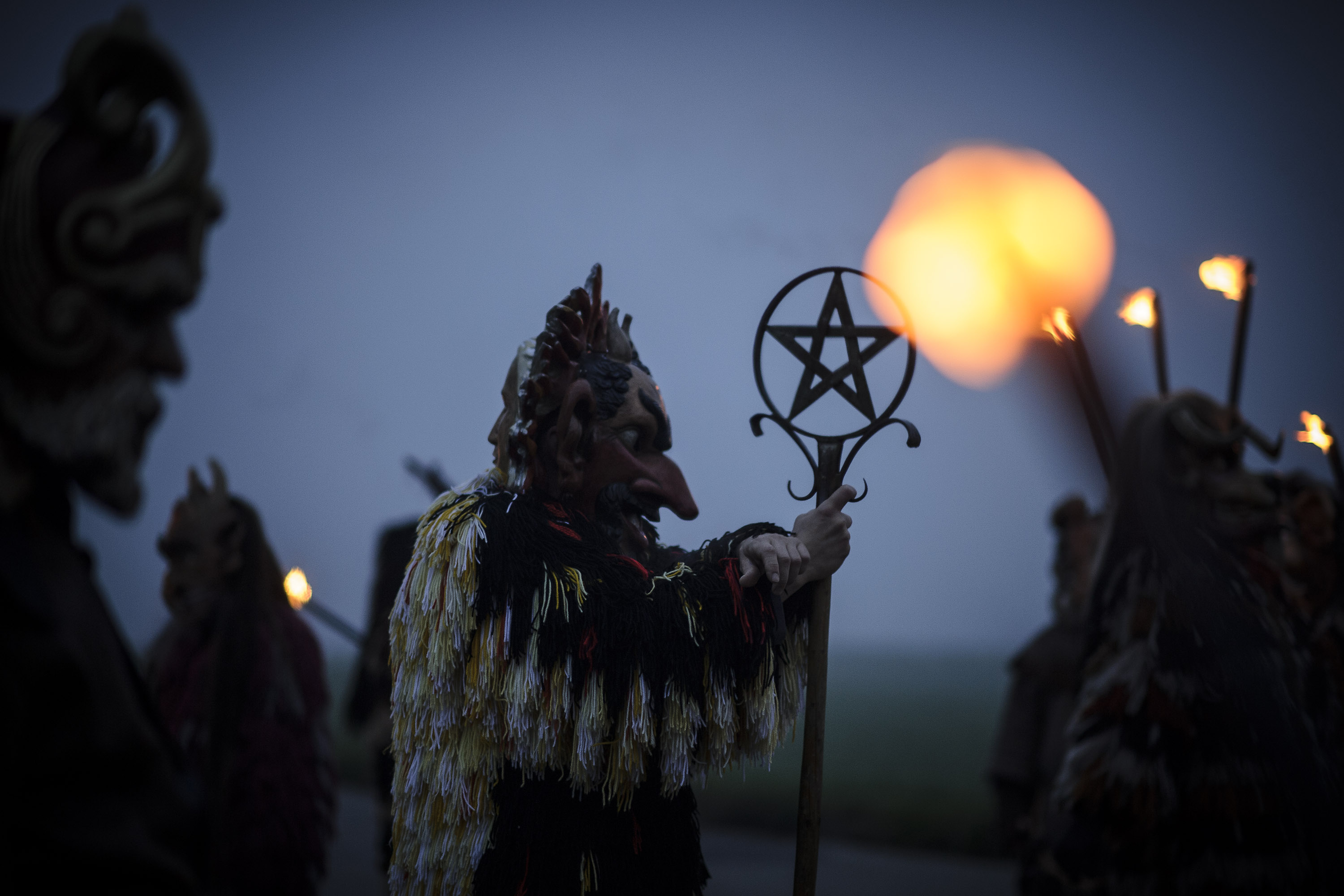 Participants dressed as Perchten roam village streets to chase away evil winter spirits in the annual Perchten gathering in Bavaria on November 29, 2014 near Kirchseeon, Germany. Perchten are the mythical entourage of Perchta, a goddess in ancient southern German alpine pagan tradition, and are usually fearsome creatures with tusks and horns and covered in hair. The tradition dates back at least to the 16th century and is also related to traditions of Krampus, Teifel, Klausen and La Befana, all animal-like creatures in the German, Austrian, Italian and Swiss alpine regions whose duties include instilling fear into naughty children. (Photo by Philipp Guelland/Getty Images)

According to legend, Frau Perchta visits children between Christmas and the feast of Epiphany. She rewards good children with a silver coin, but if they had misbehaved she would disembowel them and stuff them with straw where their organs had been.

Iceland is second in the running for the European country with the most threatening Christmas myths, and Grýla is mother to them all. Grýla is a troll who features in Icelandic mythology.  She, like Frau Perchta, remained after the Christianization of Iceland and became connected with Christmas tradition, in part because of her connection with the pagan celebration of Yule. Now the she-troll is said to be able to detect misbehaving children all year long, and that at Christmas time she leaves her home in the mountains to sate her insatiable appetite for the flesh of children.

She searches towns for misbehaving children, kidnaps them, brings them back to her home and boils them alive to make a stew. 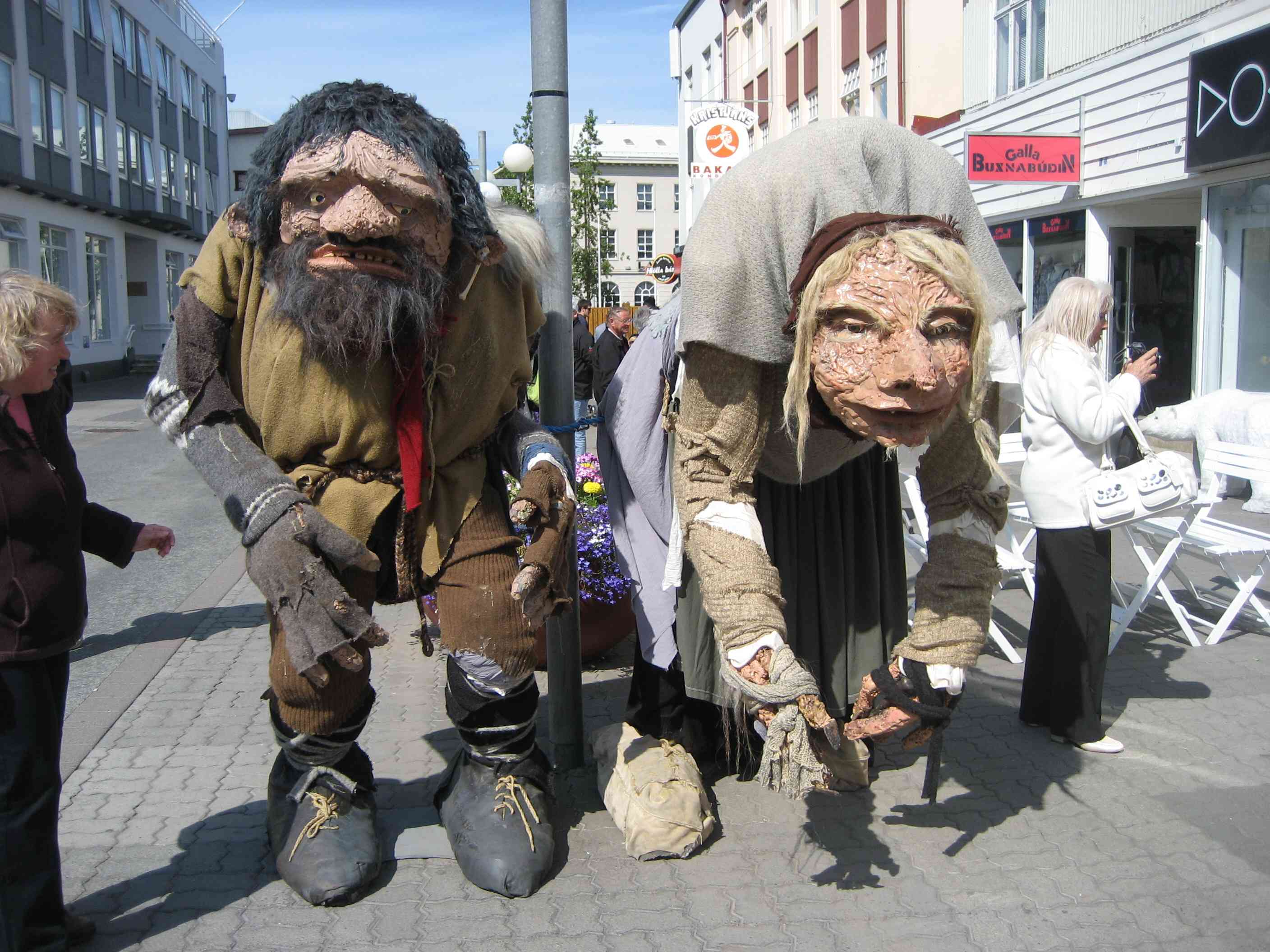 Gryla and her husband (Creative Commons)

Songs and epic poems dating as far back as the 13th century speak to the gruesome horror of Grýla.

“Down comes Grýla from the outer fields / With forty tails / A bag on her back, a sword / knife in her hand, / Coming to carve out the stomachs of the children / Who cry for meat during Lent,” reads one poem, according to Smithsonian Magazine.

Brian Pilkington, an illustrator, said that for children in Iceland, the legend isn’t just fun and games.

“Children are truly terrified of Grýla in Iceland,” says Pilkington, according to Smithsonian Magazine. “I’ve visited children’s playschools to demonstrate drawing skills and if I draw Grýla then two or three terrified children have to leave the room because it’s too strong for them. This is living folklore.”

Grýla was no laughing matter for early Icelandic people either.

Terry Gunnell, the head of the University of Iceland’s Folkloristics Department, said that before Grýla was associated with Christmas, she was “associated with a threat that lives in the mountains” and “really a personification of the winter and the darkness and the snow getting closer and taking over the land again.”

To make matters worse, Grýla is the matriarch of a family of creatures that join her in preying on or harassing townspeople. One of those creatures is a giant cat named Jólakötturinn.

Jólakötturinn is Grýla’s giant, predatory cat. The beast roams the streets of towns during Christmas time and is said to maul and devour anyone who isn’t wearing new clothes, giving rise to the tradition of buying socks or long johns around Christmas in Iceland. Some historians believe that tales of the cat may have been invented to make people work harder during the holiday season, as those who work more could afford to buy new clothing, according to EMGN.com.

Belsnickel is believed to be a companion of St. Nicholas. Legends of Belsnickel originated in Southwestern Germany in the Middle Ages. He appears either clad from head to toe in fur, or simply disguised with his face entirely obscured. He brings gifts of candies and sweets for children in one hand and a switch in the other. In some traditions he gives the candy to good children and leaves a switch with bad children, while in other traditions he scatters the candy on the ground, waits for children to scramble forward and pick up the candy, then switches their backs while they gather candy. The switch is believed to bestow some sort of charm.

Dwight Schrute, played by Rainn Wilson, dressed as the Belsnickel in the hit television show The Office (YouTube screenshot/ The Office US)

Krampus is another of Germany’s fear-based Christmas traditions, spreading terror where St. Nicholas spreads joy. The Krampus is in fact a sort of anti-St. Nicholas, and while St. Nicholas is an agent of God’s goodness, Krampus is a vicious “half goat, half demon” beast, believed to be the spawn of the Hel, the Norse goddess of death, according to National Geographic.

His whole body is covered in hair, his head is horned like the devil, his mouth is full of fangs, and his long, red, slavering tongue hangs out of his mouth like an extra appendage. This creature leaves the rewarding of good children to St. Nicholas, and prefers instead to hunt down bad children, beat them, stuff them in his sack, and abscond with them back to his lair. The demonic, pagan beast comes for his quarry on Dec. 5, known as Krampusnacht. 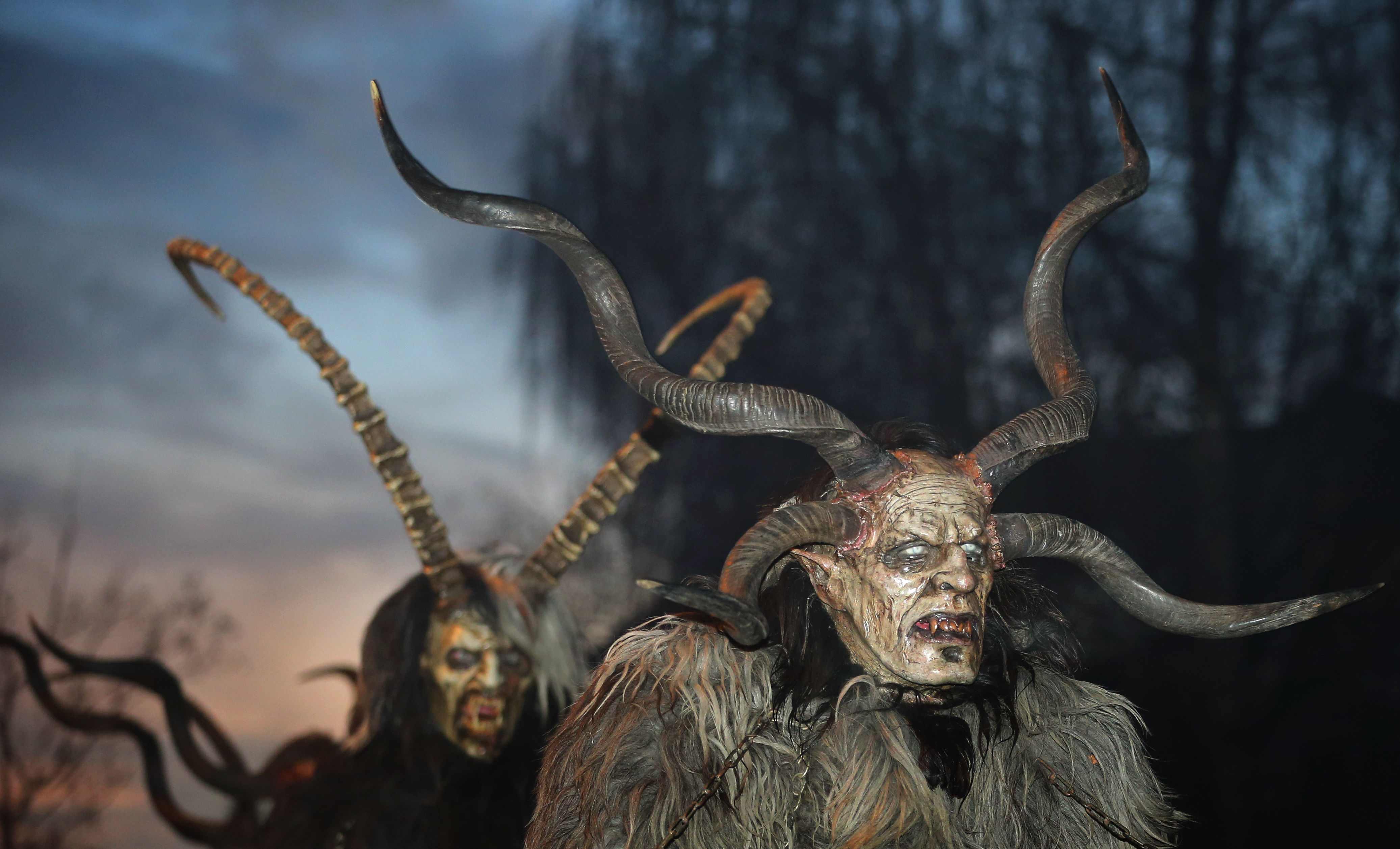 Men dressed as “Krampus”, a half-goat, half-demon figure that punishes people who misbehaved during Christmas season, take part in an event in Boerwang, southern Germany, on November 24, 2018. (KARL-JOSEF HILDENBRAND/AFP/Getty Images)

Krampus also makes an appearance in Krampuslauf, also known as the Krampus Run, when men dress as the goat demon and prowl the streets of Germany, Austria, Hungary, the Czech Republic, and Slovenia to scare children witless.

Whatever your beliefs are about these distinctly pagan, retribution-based additions to the celebration of Christ’s birth, one thing is certain — they put Elf on the Shelf to shame.