Protests and riots across France are taking a toll on the country’s economy as demonstrators leave work, damage and loot stores and discourage tourism.

“I’m not in a situation to make a clear assessment of the level of impact but I can tell you it will be an important one on the attractiveness of France,” French finance minister Bruno Le Maire told Euronews Sunday. Le Maire made the comment while touring the damage done to businesses in Paris.

I asked the French finance minister ⁦@BrunoLeMaire⁩ what impact these protests would have on the French economy. Here’s what he said: pic.twitter.com/u7LnBhVKxX

Le Maire expects the French economy to lose at least 0.1 percent of economic growth. The Bank of France has redone an estimate of fourth quarter growth, revising the projected 0.4 percent growth down to 0.2 percent, Reuters reported.

An economic slowdown is a “reality for our businessmen, entrepreneurs, it’s the reality for those whose shops were vandalized, looted, in the most violent way,” Le Maire said, according to Reuters. “And it’s a reality too for our foreign investors.”

The protests have hit during what otherwise would have been the busiest shopping season of the year. Now, retailers have lost over $1 billion in sales since the start of the anti-carbon tax protests in mid-November, the French retail federation (FCD) told Reuters Friday.

“It’s a period when commerce is usually brisk, just before Christmas — but this, this is a catastrophe,” Le Maire said.

The protests continued through a fourth weekend on Saturday and Sunday. Renewed clashes between protesters and police resulted in over 1,300 arrests in Paris Saturday, with 135 injured, including 17 police officers, according to NBC News. (French Protester Loses His Hand After Reportedly Grabbing An Active Stun Grenade) 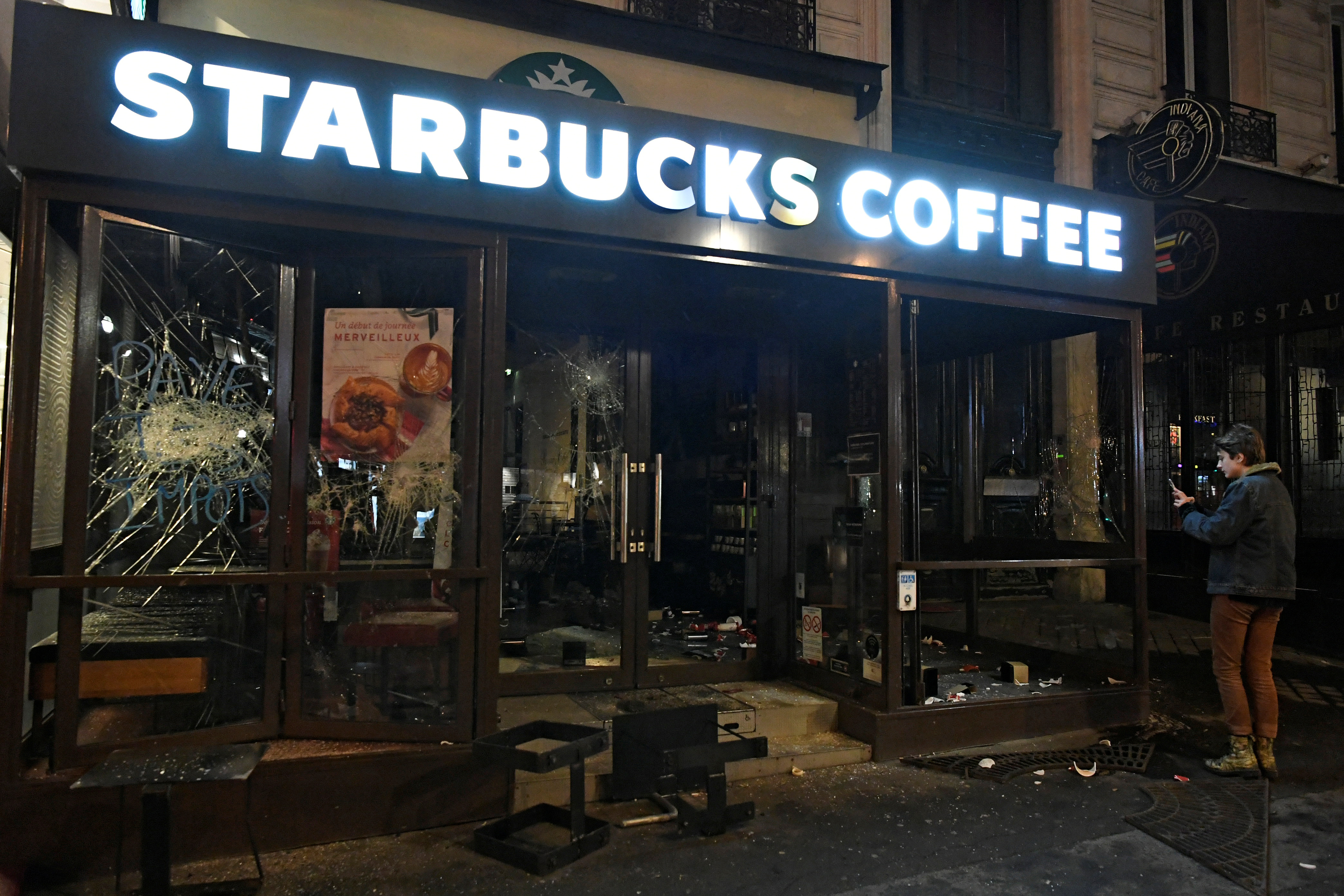 A man stops in front of a vandalized Starbucks coffe shop at the end of a national day of protest by the “yellow vests” movement in Paris, France, December 8, 2018. REUTERS/Piroschka van de Wouw

Nearly a month ago, hundreds of thousands of middle-class French citizens began protesting a Macron administration proposal to hike the tax on gas and diesel. The increased carbon tax was part of French President Emmanuel Macron’s agenda to lower emissions and combat climate change.

Macron scrapped the proposed tax on Dec. 5, but protests and riots have continued unabated as the “yellow vest” protesters, named after the neon traffic vests they wear, demand lower taxes and a cheaper cost of living. Many are calling for Macron’s resignation.

Armored vehicles patrolled the streets of Paris for the first time since World War II Saturday. The riots are the worst to sweep the country since 1968.