Mohammed Salim Al Sabban, also a former adviser to Saudi Arabia’s Ministry of Petroleum and Mineral Resources, celebrated what he called the unofficial “death” of the Paris accord.

“They will go from one meeting to another forever till it’s officially announced its death. Don’t be selective when you attack the Saudi UNFCCC position. It is unfair,” Al Sabban wrote.

Revkin was commenting on news that the U.S., Saudi Arabia, Russia and Kuwait refused to “welcome” the findings of a U.N. climate report released in October. The report said carbon dioxide emissions would need to decline 45 percent by 2030 to avoid warming greater than 1.5 degrees Celsius.

Nice hearing from you Mr.Revkin. It has been long time.Are you still following the dead Paris Agreement?They will go from one meeting to another forever till it’s officially announced its death. Don’t be selective when you attack the SaudiUNFCCC https://t.co/lw8mCmf8fl is unfair

The UN report said “rapid, far-reaching and unprecedented changes in all aspects of society” were needed to keep warming below 1.5 degrees Celsius. The report was agreed to in 2015 as part of the Paris Agreement. (RELATED: Trump Says Paris Climate Accord ‘Isn’t Working Out So Well For Paris’ As Riots Engulf The City)

President Donald Trump plans to withdraw the U.S. from the Paris climate accord in 2020. Bureaucratic chaos ensued when the U.S. only agreed to “note” the October climate report, joining Saudi Arabia, Russia and Kuwait. 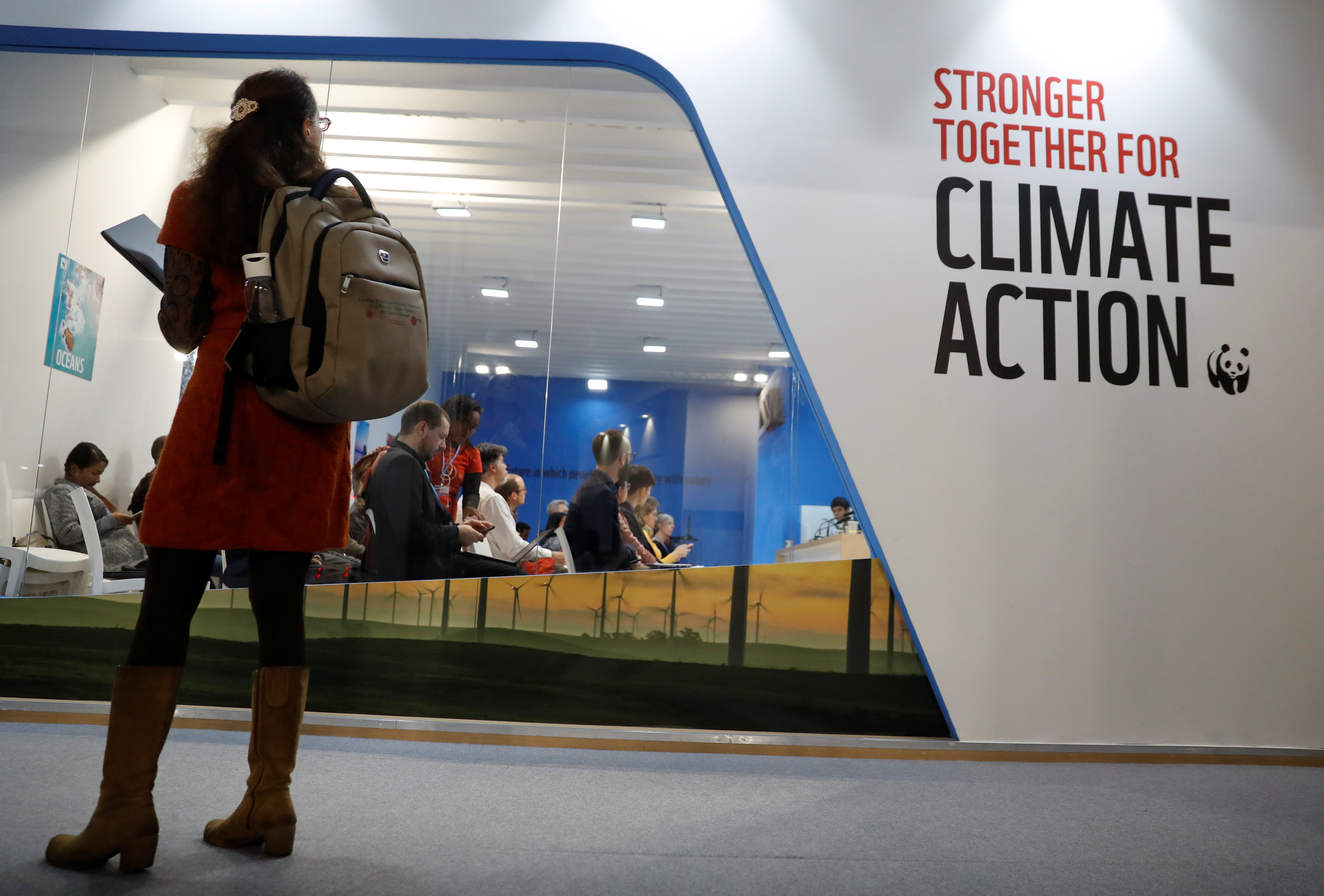 A woman watches an exhibition inside the venue of the COP24 U.N. Climate Change Conference 2018 in Katowice, Poland December 5, 2018. REUTERS/Kacper Pempel.

Around 30,000 U.N. delegates, government officials and environmental activists met in Katowice, Poland, near the beginning of December to hash out next steps for the Paris accord, which went into effect in 2016. (RELATED: Noted Scientist Tackles Sea Level Rise Alarmism)

However, like pretty much every U.N. climate summit, divisions seem to be deepening over the particulars of meeting the goals of the Paris accord to limit warming.

“Believe me. You wasting [your] time and money going to these meetings. I am in Saudi Arabia relaxed and whenever I follow the deadlock the negotiations are facing in Poland, I start laughing,” Al Sabban tweeted in response to another reporter.

Believe me. You wasting you time and money going to these meetings. I am in Saudi Arabia relaxed and whenever I follow the deadlock the negotiations are facing in Poland, I start laughing.
It proves my opinion about this big conspiracy the world created and now it’s been killed

“It proves my opinion about this big conspiracy the world created and now it’s been killed,” Al Sabban said. Sabban later tweeted that “conspiracy” he referred to was “the current persisting deadlock in the process.”

While it’s unclear if the Paris accord, which was agreed to by nearly 200 countries, is effectually dead, there are some signs the agreement is beginning to fray at the edges.

For example, Brazil declined to host next year’s U.N. climate talks at the behest of President-elect Jair Bolsonaro, who’s been called the “Trump of the Tropics.” Environmentalists are worried Bolsonaro could join Trump in withdrawing from the Paris accord.

Saudi Arabia, who Al Sabban formerly represented, effectively asked the U.N. to push back any debate on furthering commitments aimed at fighting global warming. Saudi Arabia, the U.S. and Russia are the world’s top three producers of oil and natural gas.

Al Sabban said he was “personally happy” to have helped end the U.N. Framework Convention on Climate Change (UNFCCC), the body that handles environment and climate issues.

Paris Agreement is the worst conspiracy the world ever seen. You are all happy to see coal and nuclear reviving with continued subsidies.
I am personally happy that I have contributed to the death of the Unfccc.
You will go from one meeting to another with no results