Senate Democrats have the power to choose a partial government shutdown or keep it open by agreeing to fund President Donald Trump’s border wall ahead of Friday night’s looming deadline.

The situation is reminiscent of the 2013 government shutdown in which House Republicans pushed Democrats for a budget deal that would defund or roll back Obamacare. The media mirrored former President Barack Obama’s doomsday tone about the 2013 shutdown, which ended when Republicans caved after 16 days of partial shutdown, according to The New York Times.

“[The American people] understand there are differences between the parties … but they do also expect that we don’t bring the entire government to a halt or the entire economy to a halt just because of those differences,” Obama said hours before the shutdown deadline on Sept. 30, 2013.

“The strategy is being driven by Tea Party House Republicans,” CBS News correspondent Nancy Cordes said after quoting former Senate Majority Leader Harry Reid as saying he would not not negotiate with Republicans until their key bargaining chip — partial government funding — was off the table. 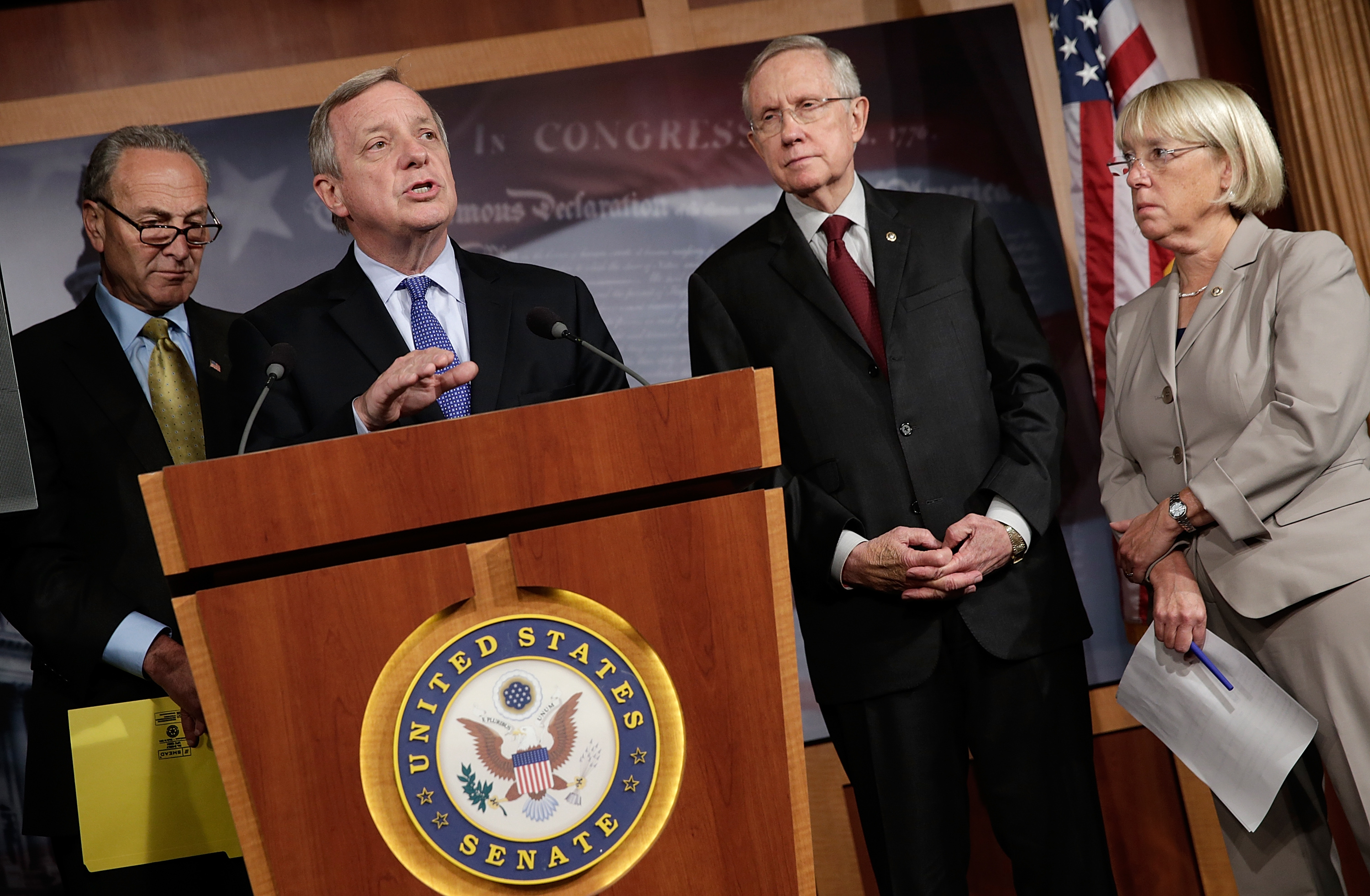 Sen. Richard Durbin speaks at a press conference after the Senate voted to table House legislation to avert a government shutdown by defunding the Affordable Health Care Act as Congress remains gridlocked over legislation to continue funding the federal government Sept. 30, 2013 in Washington, D.C. (Photo by Win McNamee/Getty Images)

Republicans gave in after more than two weeks on Oct. 16, 2013, and the country carried on. It was the first government shutdown in 17 years.

Now Trump has said he is “proud to shut down the government for border security,” and he put the ball in the Democrats’ court Friday.

“The Democrats now own the shutdown!” Trump wrote on Twitter Friday morning.

Yet just like in 2013, the media is once again blaming Republicans although the situation is reversed. This time, a Republican president backed by Republican lawmakers is waiting for the other side to come to the bargaining table. 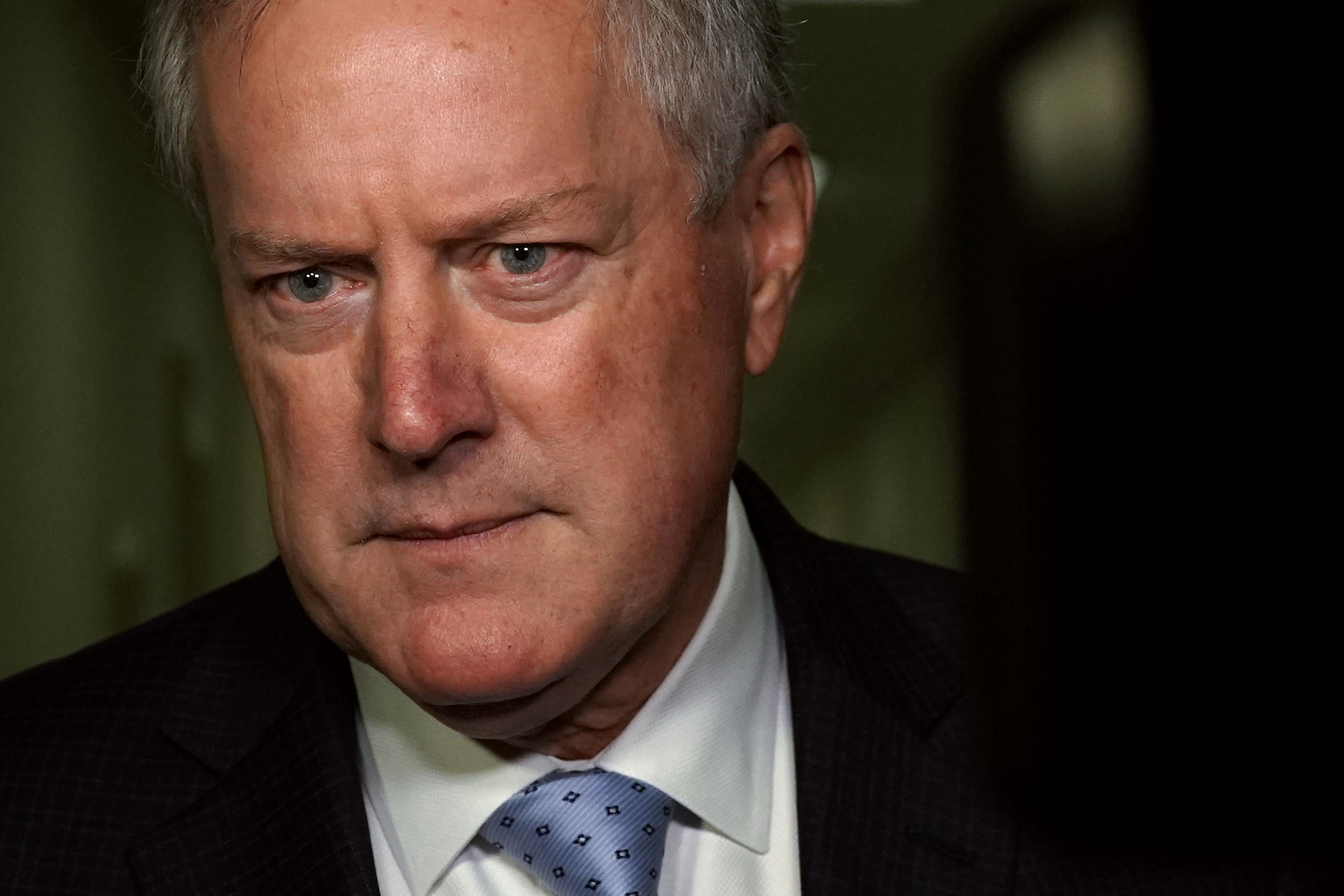 U.S. Rep. Mark Meadows speaks to members of the media as he arrives at the Rayburn House Office Building where former Federal Bureau of Investigation Director James Comey testifies to the House Judiciary and Oversight and Government Reform committees on Capitol Hill Dec. 7, 2018 in Washington, D.C. (Photo by Alex Wong/Getty Images)

Much of the coverage of wall funding as part of the budget deal has centered on Republican North Carolina Rep. Mark Meadows, chairman of the House Freedom Caucus.

Meadows addressed the possibility of a partial government shutdown and its effects on federal employees Thursday, according to The Washington Post.

“It’s actually part of what you do when you sign up for any public service position,” Meadows said. “And it’s not lost on me in terms of, you know, the potential hardship. At the same time, they know they would be required to work and even in preparation for a potential shutdown those groups within the agencies have been instructed to show up.”

Media seized on the comment and basically attributed the possibility of a shutdown to Meadows and his fellow House Republicans. WaPo wrote:

Meadows, the chairman of the House Freedom Caucus and a leading conservative voice urging President Trump not to accept a short-term spending bill absent funding for a border wall, was responding to reporters who asked about Transportation Security Administration and Border Patrol agents who would be required to continue working on Christmas without getting a paycheck.

Trump is meeting with Senate Republicans about the funding stalemate Friday morning, reported The Hill. He urged Senate Majority Leader Mitch McConnell to use the “nuclear option” to fund the border wall in a Friday morning tweet. 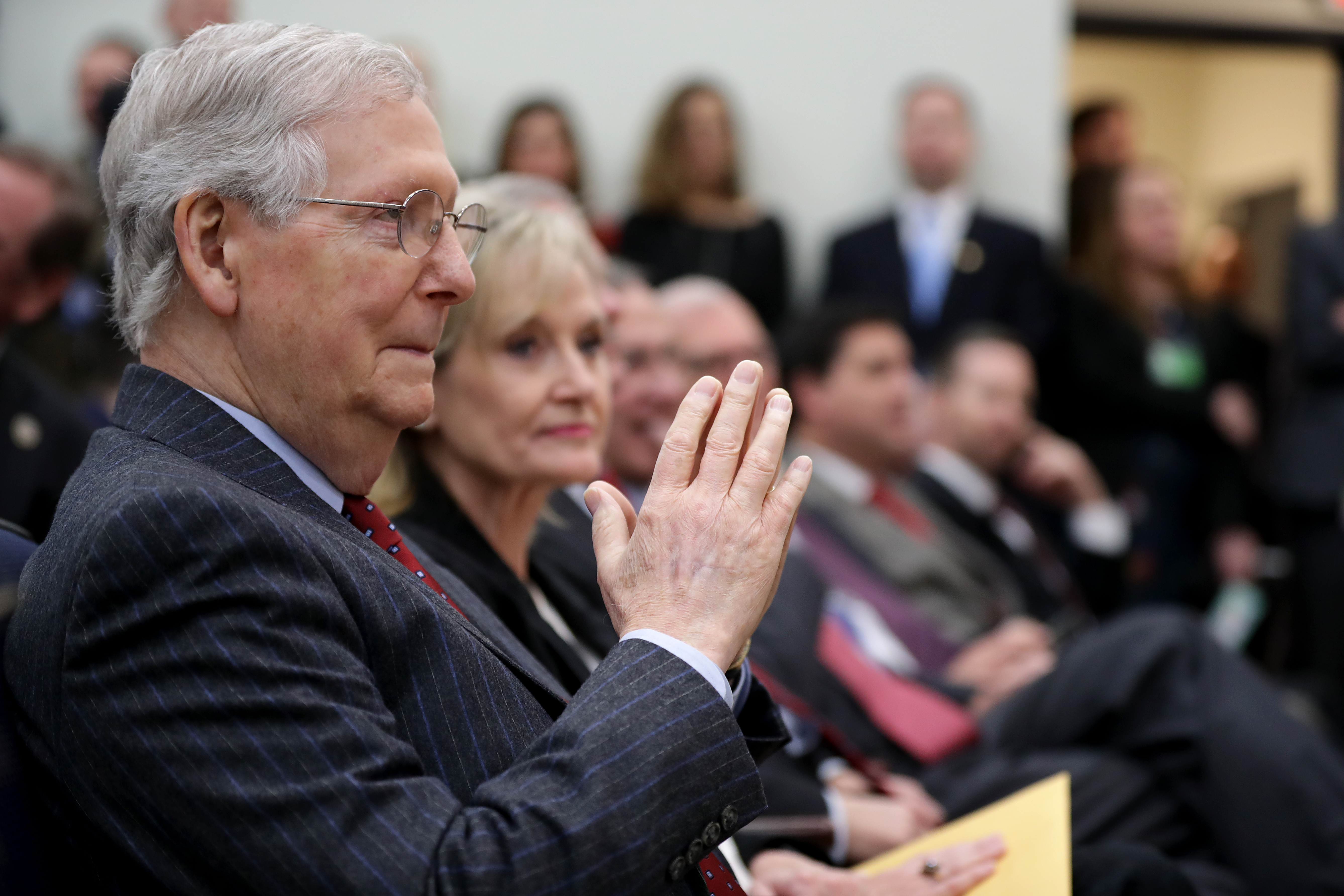 If the funding battle results in a partial government shutdown, it would contradict many Democrats’ past rhetoric.

However, past shutdowns have never affected “core Social Security functions” before, according to PolitiFact Thursday.