Outgoing Missouri Sen. Claire McCaskill is warning incoming progressive lawmakers that alienating the white working class is a recipe for disaster for Democrats working on getting results.

Rep.-elect Alexandria Ocasio-Cortez and others who are lurching the Democratic Party away from its traditional positions should respect working class people, McCaskill told CNN Monday during an exit interview. The Democratic senator lost her re-election bid in November.

“I hope she also realizes that the parts of the country that are rejecting the Democratic Party, like a whole lot of white working-class voters, need to hear about how their work is going to be respected, and the dignity of their jobs, and how we can really stick to issues that we can actually accomplish something on,” McCaskill said of the incoming New York representative.

She went on to note that Ocasio-Cortez, a Democrat, talks a lot but added: “The rhetoric is cheap. Getting results is a lot harder.” McCaskill’s broadside was a parting shot at a Democratic Party that she and others believe is moving away from its bread and butter: supporting and protecting blue-collar jobs.

Her re-election campaign suffered as McCaskill struggled to win over Missouri’s conservative voters. She raised more than a few eyebrows during the race, especially after she aired a radio ad in late October that described herself as “not one of those crazy Democrats.” (RELATED: ‘Dysfunctional’: McCaskill Trashes The Senate During Candid Farewell Address) 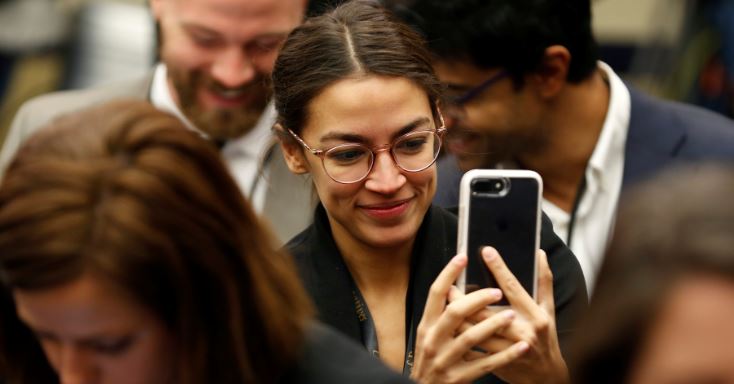 Representative elect Alexandria Ocasio-Cortez looks at her phone before a lottery for office assignments on Capitol Hill in Washington, U.S., Nov. 30, 2018. REUTERS/Joshua Roberts

McCaskill described Missouri Democratic state Sen. Maria Chappelle-Nadal as an example of one such Democrat. Chappelle-Nadal sparked outrage in 2017 after calling for President Donald Trump’s assassination. It was all for naught: McCaskill lost to Republican Josh Hawley.

Ocasio-Cortez’s strident opposition to the fossil fuel industry, and by extension manufactures, does not appear to be winning her many converts among the middle-class union workers.

Terry O’Sullivan, general president of the Laborers’ International Union of North America (LIUNA), took issue with her anti-oil mission during a phone conference earlier in December.

“To me the Green New Deal is just a regurgitation of the keep it in the ground movement,” he said during the Dec. 18 call, referring to the so-called Green New Deal, an environmental push by Ocasio-Cortez. “What I’ve seen so far I’m not that impressed with. It scares the heck out of me.”