During September’s rut in Utah, you never know where you’ll find the elk. Sometimes they stride into the open at dawn or dusk to unleash a bugle, but most times they stay buried in the aspens like a tick on a hound. In the steep and thick stuff where sneaking is the rule, I like a lightweight rifle; but as soon as I tuck in behind a deadfall, I’ll be faced with a fleeting 400-yard opportunity across the canyon—a shot best served by a heavier-barreled magnum. I hate to overthink this stuff, but choosing the best rifle for all possible scenarios is important to me.

When I lucked into a coveted elk tag in Utah this past year, I chose Nosler’s new M48 Long Range Carbon chambered in the versatile .28 Nosler, because it’s one of the slickest do-all rifles—and cartridges—in this, the era of hybrid rifles. By hybrid, I mean the 7-pound Long Range Carbon is a full-length, heavy-barreled rifle that’s just as suited for the sandbags at the target range as it is for slogging through snow and cedars on the crest of a mountain. A heavy barrel and light weight are normally mutually exclusive, but the combination is made possible by carbon fiber.

In 2018 Nosler contracted Proof Research to build barrels—and not just ordinary barrels. The Columbia Falls, Mont., firm specializes in producing match-grade, though very thin, stainless steel barrels that it wraps with aerospace-grade carbon-fiber and resin. The thin barrel saves weight while the surrounding carbon fiber gives it spine. The company claims the resulting barrel is stiffer than all-steel barrels of the same diameter. While I can’t prove or disprove that, Proof’s claim that the barrel is up to 64 percent lighter than an all-steel barrel of the same size feels about right to me.

In my testing, Proof’s carbon-wrapped barrels appear less susceptible to accuracy issues caused by heating during rapid fire. The carbon fiber dissipates heat faster than steel. The Proof barrels I’ve shot are superbly accurate—at least as accurate as all-steel barrels despite weighing much less. The 26-inch barrel on the Long Range Carbon, with its “Sendero” contour that’s 1.06 inches in diameter just forward of the chamber and gradually tapers to .800 inch at the muzzle, weighs just 3 pounds, 4 ounces. It features a ⅝x24 threaded muzzle that comes with a cap. If this heavy-contour tube were made exclusively of steel, it would weigh at least 6 pounds. And I doubt it could be any more accurate.

As for negatives, new technology isn’t cheap. The Proof barrel alone costs around $800. But the manager of Nosler’s rifle division, Jeff Sipe, wanted to create the ultimate mass-produced, do-all rifle, and I agree with his choice even if the M48 Long Range Carbon does cost three grand. 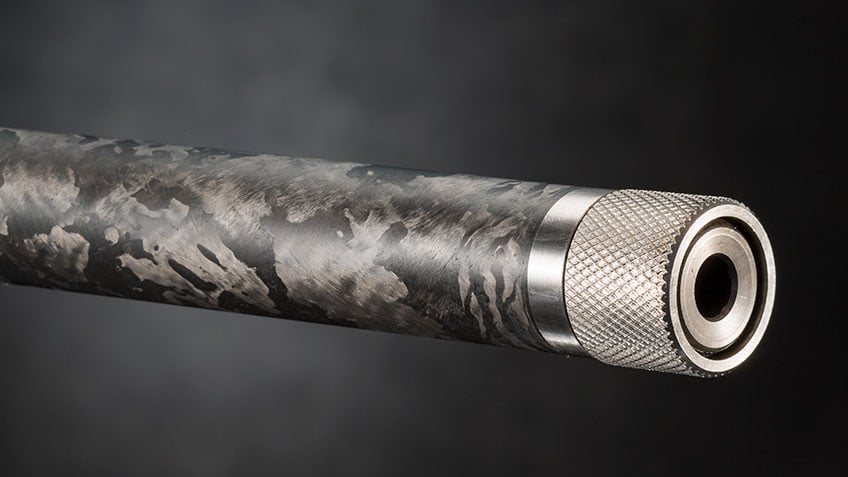 The rifle, of course, is much more than just a fancy barrel; it’s built on Nosler’s heralded M48 action. The machined, octagonal action features a two-lug, fluted bolt with slots in its underbelly so the extremely stout firing-pin spring can be accessed without hassle. Spent shells are extracted and ejected via a Remington-style extractor and plunger system. The entire action and bottom metal are treated with Cerakote.

My test rifle’s Timney trigger broke at 3 pounds, 6 ounces. Devoid of creep or overtravel, it’s delightful. The two-position safety, however, is rather pedestrian. I’d like to see a third position that locks the bolt while the safety is on.

Finally, Sipe chose a premium Manners Elite Tactical stock, which has a carbon-fiber shell that makes it extremely rigid yet feather light at just 28 ounces. It features a vertical-style grip with a palm swell, molded-in ridges for grip, and a square but not clumsy fore-end that has dual studs so one can be used for a bipod. Nosler shaved the first 3 inches off the raised comb so the bolt can pass over it, yet left room for the cheek to garner proper eye alignment. Most importantly, the ultra-premium stock provides an unwavering platform for the barreled action via a combination of aluminum pillar and glass bedding that Nosler ensures by hand.

Performance wise, the Long Range Carbon is tough to beat. The .28 Nosler is among a small, elite class of the most versatile cartridges ever devised for big game. Its 160-grain AccuBond bullet leaves the muzzle at 3300 fps. (It’s also available in a 175-grain AccuBond Long Range load.) This results in more than 2,000 ft.-lbs. of energy at 500 yards with only 35 inches of drop at that distance with a 200-yard zero! With the 160-grain load, the Long Range Carbon averaged .75-inch groups, which is exactly what Nosler guarantees. This is phenomenal for a mass-produced rifle of any make or model, let alone one weighing just 7 pounds.

What I liked most, however, is that I didn’t have to sacrifice weight for accuracy, or stability for versatility, when I chose a rifle for my elk hunt. The elk, of course, proved typically unpredictable. While the outfitter warned of long-range shot probabilities, I wound up stalking to 60 yards of a bull before I shot the 6×6 beast offhand, while standing. The .28 Nosler took fast effect.

I believe the Nosler Long Range Carbon is among the most advanced all-around rifles available to date. And while the NRA makes sure we don’t have to pick just one gun for everything, in theoretical discussions this rifle in .28 Nosler makes a strong argument for that title.