BuzzFeed editor Ben Smith and reporter Anthony Cormier doubled down Sunday on their bombshell report that President Donald Trump directed Michael Cohen to lie to Congress about his efforts to build a Trump Tower in Russia.

“I have further confirmation that this is right. We are being told to stand our ground. Our reporting is going to be borne out to be accurate, and we’re 100 percent behind it,” Cormier told CNN’s Brian Stelter during an interview about their report, which has been directly disputed by the special counsel’s office.

“The same sources that we used in the story are standing behind it, and so are we.”

But while Smith and Cormier expressed unwavering confidence in their story, the pair declined to discuss the specifics about how their report came together. (RELATED: Mueller’s Office Disputes BuzzFeed Report)

Cormier dodged Stelter’s questions about documents that his colleague, Jason Leopold, claims to have seen as part of the reporting process. Cormier also acknowledged he is not certain what Cohen specifically told the special counsel or what Trump allegedly told Cohen.

Cormier and Leopold reported Thursday night that Cohen told the special counsel’s office Trump directed him to lie to Congress in 2017 about his efforts to build a Trump Tower in Moscow during the 2016 presidential campaign.

Democrats jumped on the story, calling for investigations into whether Trump suborned perjury or obstructed justice.

Nearly 24 hours after the story appeared, a spokesman for special counsel Robert Mueller delivered a devastating rebuttal to the report.

“BuzzFeed’s description of specific statements to the Special Counsel’s Office, and characterization of documents and testimony obtained by this office, regarding Michael Cohen’s Congressional testimony are not accurate,” spokesman Peter Carr said in a statement.

The New York Times and Washington Post since reported the statement was intended to be a full-throated rebuttal to the claim that Cohen told Mueller’s office he was told to lie by Trump.

But Smith and Cormier remained confident in the face of the Mueller pushback.

“What if the sources are just wrong?” Stelter asked Cormier, who won a Pulitzer Prize in 2016.

But while BuzzFeed is refusing to back off of its story, numerous questions remain about what sources and documents were used for the report.

In an interview Friday morning, prior to the Mueller statement, BuzzFeed’s Leopold told MSNBC he had seen documents referred to in the report. Cormier said in a separate interview with CNN he had not seen documents.

“Can’t really get into, like, the details there,” Cormier said.

“Really, at this point, because of the calls for a leak investigation and the sort of sensitivity around that matter, we really can’t go any further at all in order to not jeopardize our sources,” he added, noting Trump’s lawyer Rudy Giuliani had called for an investigation into who leaked information for the BuzzFeed report.

“In the interest of protecting … sources, we aren’t going to speak further on the details of who saw what and when, beyond what’s in the reporting,” Mittenthal told The Daily Caller News Foundation.

Cormier also suggested BuzzFeed is not quite certain exactly what Cohen might have told the special counsel and what he and Trump may have discussed regarding the former Trump lawyer’s congressional testimony.

“We’re trying to figure out how to parse the statement from the Mueller team, and what’s happening now only behind the scenes at DOJ and the special counsel, but we’re trying to get deeper inside the room where this happened,” Cormier said. 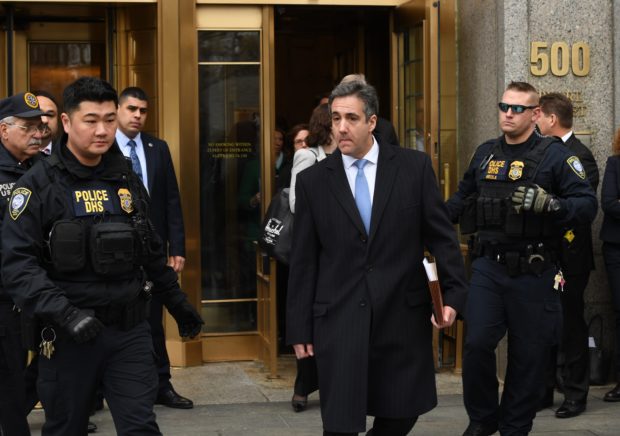 When asked by Stelter what is known about Trump’s remarks to Cohen, Cormier replied: “We’ll get there eventually, Brian.”

When Stelter suggested perhaps Trump offered something less than a full-throated order to lie to Congress, Cormier said, “we don’t know.”

“We’re trying to get the exact language that was used in this conversation, and we’ll get there one day,” he added.

“We continue to report like mad, as we always do. But what we reported, that the president of the United States directed Michael Cohen to lie to Congress, is accurate. That is fundamentally accurate. We’re going to get inside the room where it happened and bear it out. We’ve taken this to ground here — we’re going to go even further to get inside that room.”

In another exchange, Stelter pressed Smith over Leopold’s efforts to request comment from the special counsel prior to running the story.

Leopold contacted Carr hours before the story ran to say BuzzFeed was planning to report that Cohen claimed Trump instructed him to lie to Congress. The request did not say Cohen made the claim during interactions with the special counsel.

Carr, who rarely offers comment to reporters, declined comment. But according to The Washington Post, Carr has since claimed if he had known precisely what BuzzFeed was planning to report, he would have pushed back harder on the allegation.

Stelter criticized Smith and BuzzFeed for what he called a “shockingly casual way to ask for comment for such a serious story” and a “dereliction of duty.”