U2 frontman Bono called capitalism “amoral” and “a wild beast,” while suggesting that “if not tamed” it “can chew up a lot of people along the way.”

“Capitalism is not immoral — it’s amoral. It requires our instruction,” the 58-year-old singer shared Wednesday when he spoke at the World Economic Forum in Davos, Switzerland, according to The Irish Times. (RELATED: Bono: Donald Trump Is Trying To Hijack America) 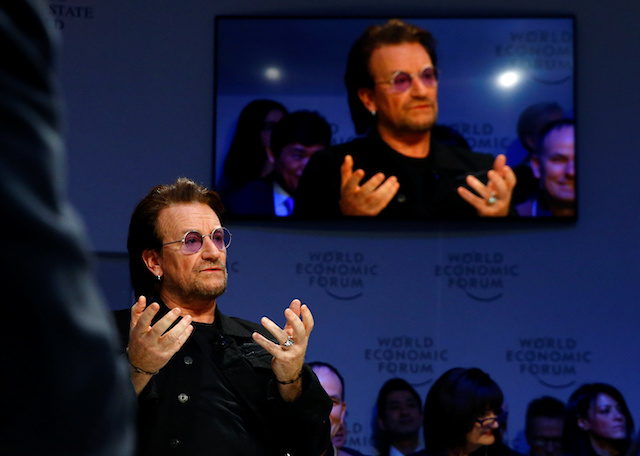 Bono, U2 singer and co-founder of the One campaign, speaks during the World Economic Forum (WEF) annual meeting in Davos, Switzerland, January 23, 2019. REUTERS/Arnd Wiegmann

“Capitalism has taken more people out of poverty than any other ‘ism,'” he added. “But it is a wild beast that, if not tamed, can chew up a lot of people along the way.” (RELATED: Bono Named As One Of Glamour’s ‘Women Of The Year’ In 2016)

The comments were just the latest from the singer and activist who has spent the last decade or so speaking out on world issues and even co-creating “ONE,” an organization dedicated to ending global poverty. (RELATED: U2 Blasts Trump And Supporters At IHeart Radio Festival [VIDEO])

Recently, he compared his organization to the National Rifle Association (NRA) when he noted how the gun rights group has been able to help enact change for its members.

“Whatever you feel about the NRA – and I don’t like them very much – they’re a very well-organized group and we want ONE to be the NRA for the world’s poor,” the “One” singer shared. “So the ONE campaign – if you’re getting in the way of legislation that will make lives easier for the world’s most vulnerable populations, we’re gonna find out where you live [and] we’re gonna camp outside your office.”