Navarro dismissed the case against Bundy, his two sons and one other man “with prejudice” on Jan. 8, 2018, preventing the defendants from being retried. Bundy and the others faced 15 criminal charges related to a standoff with federal officials at his ranch in 2014. (RELATED: Feds Beg For A Fifth Shot At Prosecuting Bundy Clan After Failing Four Times In A Row)

“Hey, get with it. We’ll expose the rest of their dirt,” Bundy told The Daily Caller News Foundation, ready to go back to court should the Ninth Circuit order a retrial.

Bundy’s case ended in a mistrial on Dec. 20, 2017, after a team of federal prosecutors were found withholding evidence from the court that was favorable to Bundy’s defense. Prosecutors handed over roughly 3,000 pages worth of overdue evidence to the court after repeated requests from the defendants.

Navarro found the prosecutorial team had broken federal law and violated the defendants’ civil rights by not turning the documents over sooner, according to court documents.

“The Court’s finding of outrageous government conduct was not in error,” Navarro wrote in a July 2018 ruling, obtained by The Oregonian. “On the contrary, a universal sense of justice was violated by the Government’s failure to provide evidence that is potentially exculpatory.”

The federal prosecutors’ attempt to overturn Navarro’s decision and put Bundy back on trial is “surprising” to the 72-year-old Nevada rancher.

“They lied in the indictment. It was unbelievable,” Bundy told TheDCNF in a phone interview Friday. “Then they built upon those lies and continued to lie and tried to hide it from the jury. … They didn’t ever let us bring forth any of the real evidence of whether we were guilty or not guilty.” 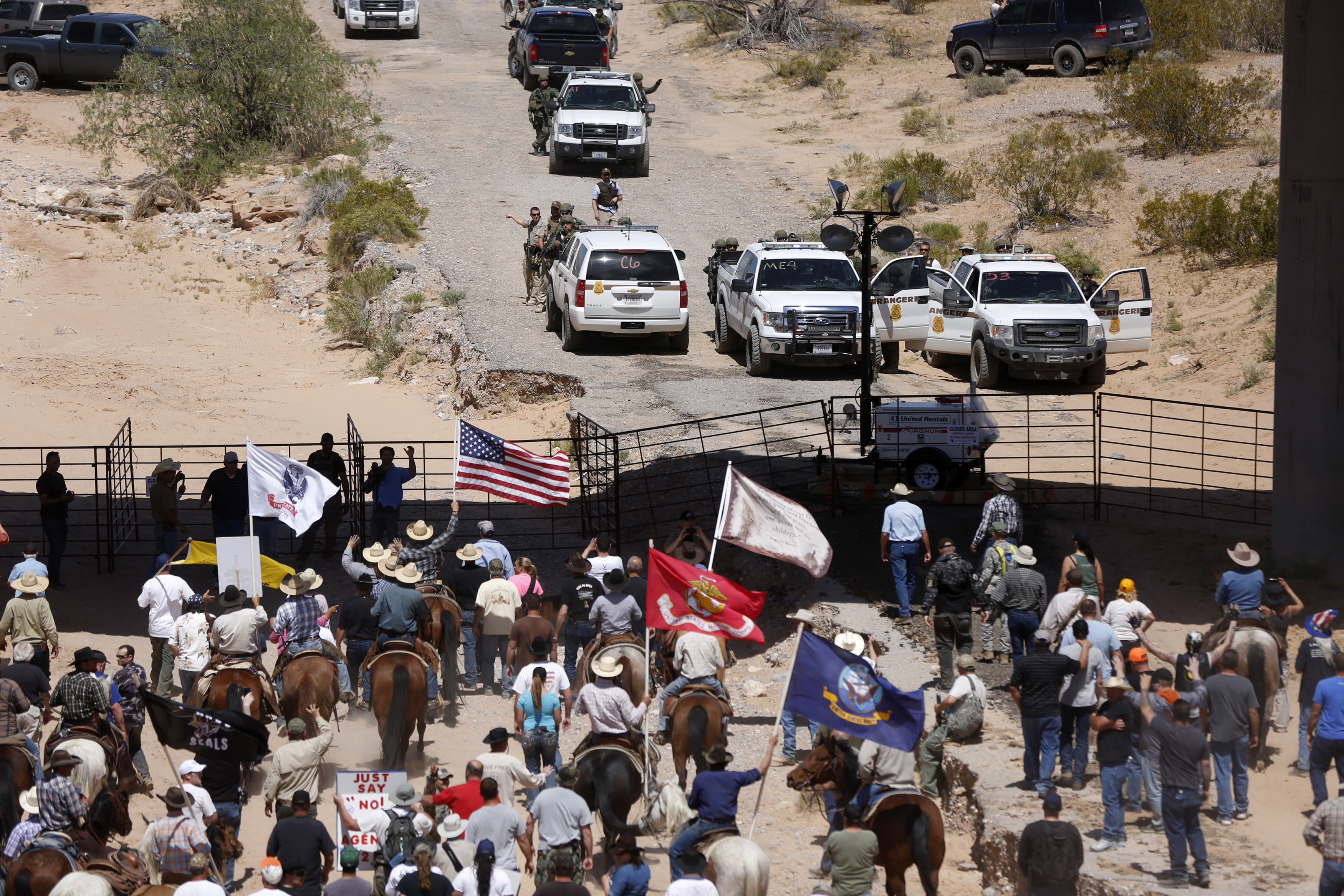 Protesters gather at the Bureau of Land Management’s base camp, where cattle that were seized from rancher Cliven Bundy are being held, near Bunkerville, Nevada, April 12, 2014. REUTERS/Jim Urquhart

The DOJ has yet to issue any findings in the investigation of Myhre’s team. Until those results are released, any DOJ attempts to bring Bundy back before a judge are “absolutely premature,” Bundy family lawyer Joseph Kerry told TheDCNF.

“These prosecutors, and apparently members of the FBI, were going to be called to answer for missing documents, materials that weren’t provided,” Kerry said Friday. “Just maybe, instead of focusing on Cliven Bundy and his family, the Department of Justice should be looking at the status of that internal investigation.” 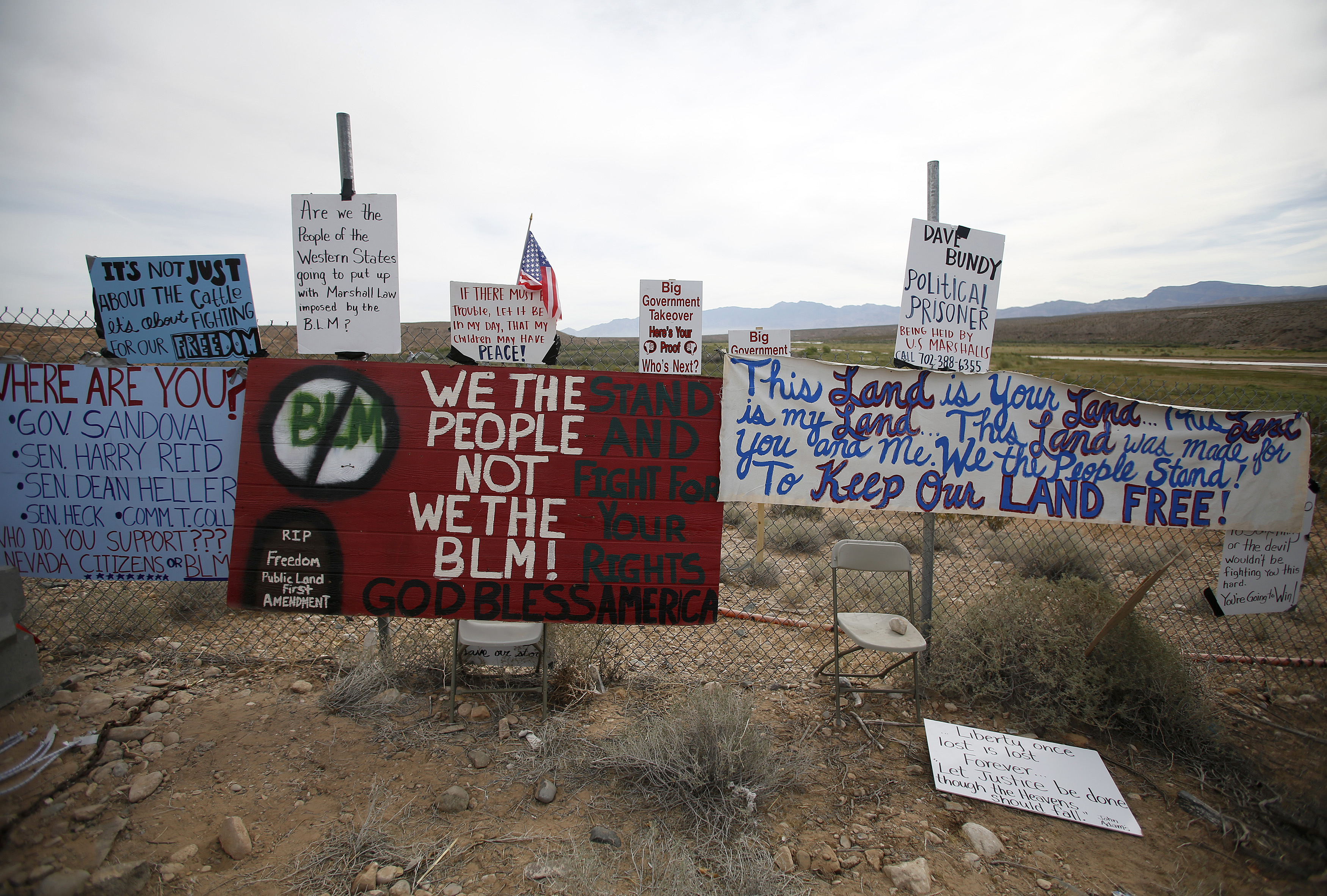 Protest signs are seen on a fence in Bunkerville, Nevada, April 11, 2014. REUTERS/Jim Urquhart

Bundy believes the jury would have found him innocent had his trial been allowed to conclude with the withheld evidence. His case rested on his right to self-defense against hyper-aggressive action taken by Bureau of Land Management (BLM) officials attempting to impound his cattle.

The results of an internal investigation of the BLM found that federal agents committed “the most intrusive, oppressive, large scale and militaristic trespass cattle impound possible.” The investigation results were part of the 3,000 overdue pages of evidence that led to the mistrial.

“If we would have had two more hours before that jury, we would’ve brought a lot of evidence forward that the government didn’t want the jury to hear,” Bundy said. “I felt like dropping the case and releasing me out of jail and all those things were to the government’s advantage more than it were to mine.”

Though he was forced to forget his business while he stayed two years in prison, the ranch is still in operation thanks to family and neighbors helping out.

“It did hurt us financially and physically, but we are surviving,” Bundy told TheDCNF.

Coming back home to his family, friends and his way of life after the charges were dismissed was, simply, “nice.”

“I have a large family — had a lot of grandchildren that was happy to see me and love me,” Bundy said. “I have a lot of faith in the Heavenly Father and I feel like he’s protecting me and blessed me in many, many ways. So with that faith, I don’t have a lot of fear.”