A Washington Post blogger has come under heavy criticism after tweeting a call for Virginia Governor Ralph Northam to be replaced by the state’s lieutenant governor, a “dynamic, eloquent African American.”

Jennifer Rubin, whose Twitter profile identifies her as a “conservative blogger” for the outlet, issued a call for Democrats to “move Northam out” after a racist picture from the Virginia governor’s 1984 medical school days came to light so he could be replaced by Lieutenant Governor Justin Fairfax. However, it wasn’t the call itself that got Rubin in hot water, but rather her description of Fairfax. 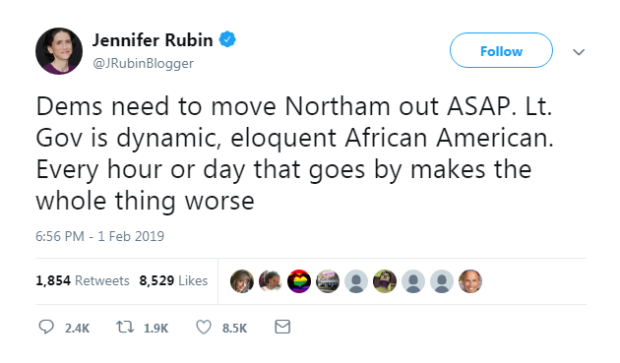 Would you say he’s articulate Jennifer? Is that what you would say?

For those moments when you’re so impressed a Black person can use complete sentences. https://t.co/uDRryKEqqn

Do you agree with #HarryReid that it is also good that he is light-skinned & speaks w/ no negro dialect?https://t.co/6kCpBAJnxO

Oh wait
That was about Obama
Why is the Left so racist? https://t.co/LH81RDgoTn

Are you saying the majority of African Americans aren’t eloquent?
Are you saying no other race can do the job?
Or maybe you’re boasting the line of succession for a personal gain?
I would STFU if I were you. https://t.co/QgYkDD7IPP

This right here is what systemic deep-rooted racism looks like. Recognize it and call it out when you see it. https://t.co/3KXTy4dUg2

Rubin’s tweet is still up at time of publication.