President Trump‘s longtime adviser and bud Roger Stone has been sparring with CNN’s Ana Navarro for years.  He bad-mouthed her so badly in 2016 that CNN banned him from appearing on its airwaves. For at least a while. After the feds recently indicted him on seven counts, the network couldn’t book him fast enough.

But on Friday, Stone appeared as a co-host on the InfoWars show “War Room.” He stepped up his name-calling game and called Navarro “porquita” and “a little piglet.”

Navarro recently gloated her head off on ABC’s “The View” after the FBI showed up at Stone’s Fort Lauderdale home at the crack of dawn and scared the daylights out of his dogs and his deaf wife. She tweeted that Special Prosecutor Robert Mueller “f*cking Roger Stone” was an “early wedding gift.” (RELATED: Ana Navarro Feasts On Roger Stone’s Arrest)

Apparently “piglet” struck an even deeper nerve. On Monday night, Navarro hit back at him. She painted the experience as a “badge of honor.”

But really, is it? 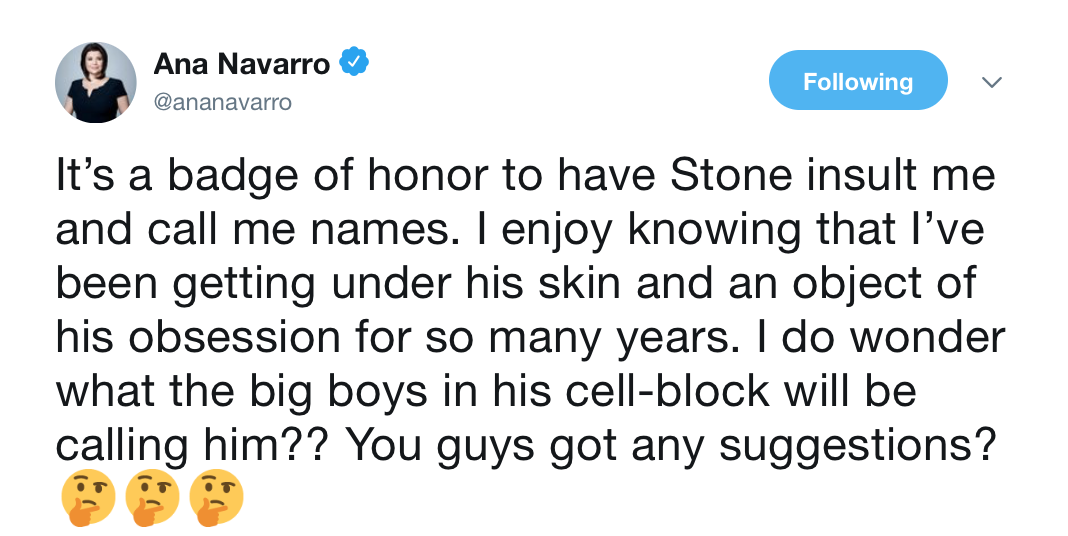 Stone, who happens to be The Daily Caller‘s Men’s Fashion Editor, didn’t limit his criticisms to Navarro. He extended them to CNN’s Don Lemon for wearing phony glasses, which Stone says do not make him look smarter. He also dug into Rep. Adam Schiff (D-Calif.), whom Trump has nicknamed “Little Adam Schitt.” Schiff is in a position to torment Trump as chairman of the United States House Permanent Select Committee on Intelligence.

Stone ripped into Navarro for something he has consistently said of her. He claims she’s a “diva’ and “abusive” toward people she deems lower than her such as hair people, waiters, doormen, and cabbies.

OWEN SHROYER: “Roger, what is it like? I mean, you have Ana Navarro, you have Don Lemon, you have Stephen Colbert — you have all these mainstream media hacks just lying about you, celebrating this illegal takedown of you. I mean — this is sick, Roger. I don’t even know what to say at this point.”

ROGER STONE: “Owen, Owen, this is really simple. A man is known by his enemies. Ana Navarro, porquita, a little piglet. This woman is 50 pounds of [Rep. Adam] Schiff [D-Calif.)] in a 20-pound bag. Talentless. No accomplishment. She’s the ‘political consultant’ who’s never actually elected anybody to anything. She’s really a nasty diva, very abusive of the makeup people, and the hair people, waiters, doormen, cab drivers, and she’s accomplished nothing. She’s an enormous sack of Schiff and an abusive person on top of it. So, I revel in your hatred, Ana, and when I’m acquitted I’m going to go right back to criticizing you for your total lack of talent or intelligence. Puerco is what I would say. Now Don Lemon, those glasses, by the way, have windowpane glass in them. He doesn’t need glasses, he wears those to try to look intelligent, but in all honesty it doesn’t help.”

Navarro would obviously delight in seeing Stone go to prison.

But so far, he’s holding his own.