Federal regulators dinged an Obama-era rule that beefed up regulations on the Internet slightly more than a year ago. Democrats are now discussing ways to revive at least a portion of the regulation.

Democratic lawmakers are searching for ways to nullify Federal Communications Commission Chairman Ajit Pai’s move to rollback net neutrality. Their most recent effort came Feb. 7 when the House Communications Subcommittee conducted a hearing with witnesses who support the rule.

Four of the six witnesses at the hearing were staunch defenders of the rule. Former FCC Chairman Tom Wheeler, whose Open Internet order Pai repealed, and Mozilla COO Denelle Dixon, who led a legal challenge against the move. They spoke in support of reinstating rules they believe forbid Internet Service Providers (ISPs) from blocking content that slows down networks.

Activists often characterize ISPs as a driveway connecting a home to the vast network of portals on the internet, while net neutrality, they claim, is the principle preventing providers from charging a high fee for some traffic. Many people who oppose providing the government more authority over bandwidth say that’s not an apt-description. 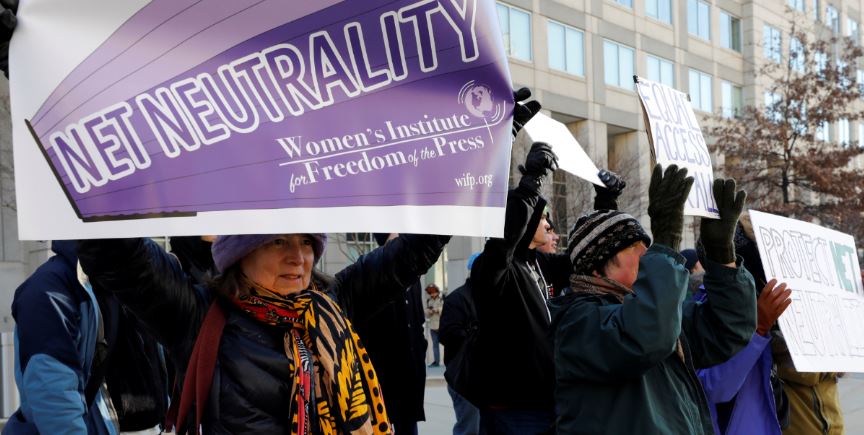 “One of the great lies is that that’s ever been challenged, or that it’s at risk,” said Powell, who is now the head of the Internet and Television Association (NCTA). “The bottom line is that nobody has ever represented to me a meaningful business model that would ultimately cause consumers to have a horrible experience.” He was one of only a handful of people at the Feb.7 hearing who prefers restoring the internet to the pre-Obama era.

Powell and others have haggled over the net neutrality concept for years, even as it continues to evolve. Congress made five attempts between 2005 and 2012 to add teeth to the principle, none of which were successful. The FCC finally issued the Open Internet Order reclassifying ISPs as Title II services during the latter half of the Obama administration.

Pai returned the previous classification of ISPs as Title I services. More than 20 states launched a joint lawsuit against the FCC shortly thereafter, while California did those states one better: The Golden State passed its own state-level net neutrality law, which is itself being challenged by the federal government. (RELATED: Justice Department Sues California Over Its Net Neutrality Law)

The Feb. 7 hearing comes after House lawmakers failed in May 2018 to bring back the rules after the Senate voted to reinstate. Republican Sens. Lisa Murkowski of Alaska and John Kennedy of Louisiana, perhaps swayed by concerns about ISPs potentially hurting internet traffic, helped Senate Democrats push the legislation through. Repealing the controversial rules have not done much to affect internet speeds.

Wired magazine, for instance, acknowledged in December 2018, a year after the end of net neutrality, that on the one-year anniversary of the repeal, there have been “no big changes.” Other outlets made similar points. Since the repeal of the Obama-era rule took effect in June 2018, internet speed went from 12th to sixth fastest in the world, according to media reports.