Former Republican Ohio Gov. John Kasich said that while the Green New Deal might not be the right answer to global warming, “it’s asking the right question.”

“But for all those problems, the Green New Deal is serving an important purpose by provoking a more vigorous level of public debate,” Kasich wrote in a USA Today op-ed published Monday. “We’ve finally reached a tipping point.”

Some Democratic 2020 hopefuls endorse the bill, but many moderate Democrats are hesitant to embrace it on worries it’s not feasible to fundamentally transform society so quickly. Republicans oppose the bill’s massive government takeover of the economy.

Kasich, who’s mulling a 2020 presidential run against President Donald Trump, wants moderates in both parties to come up with an alternative to the Green New Deal.

“It’s time for free-market moderates on both sides of the aisle to come up with answers of their own,” Kasich wrote in his op-ed, embracing carbon pricing, fuel economy mandates and subsidies for electric vehicles. (RELATED: Democrats, Including Ocasio-Cortez, Vote Against Green New Deal Amendment) 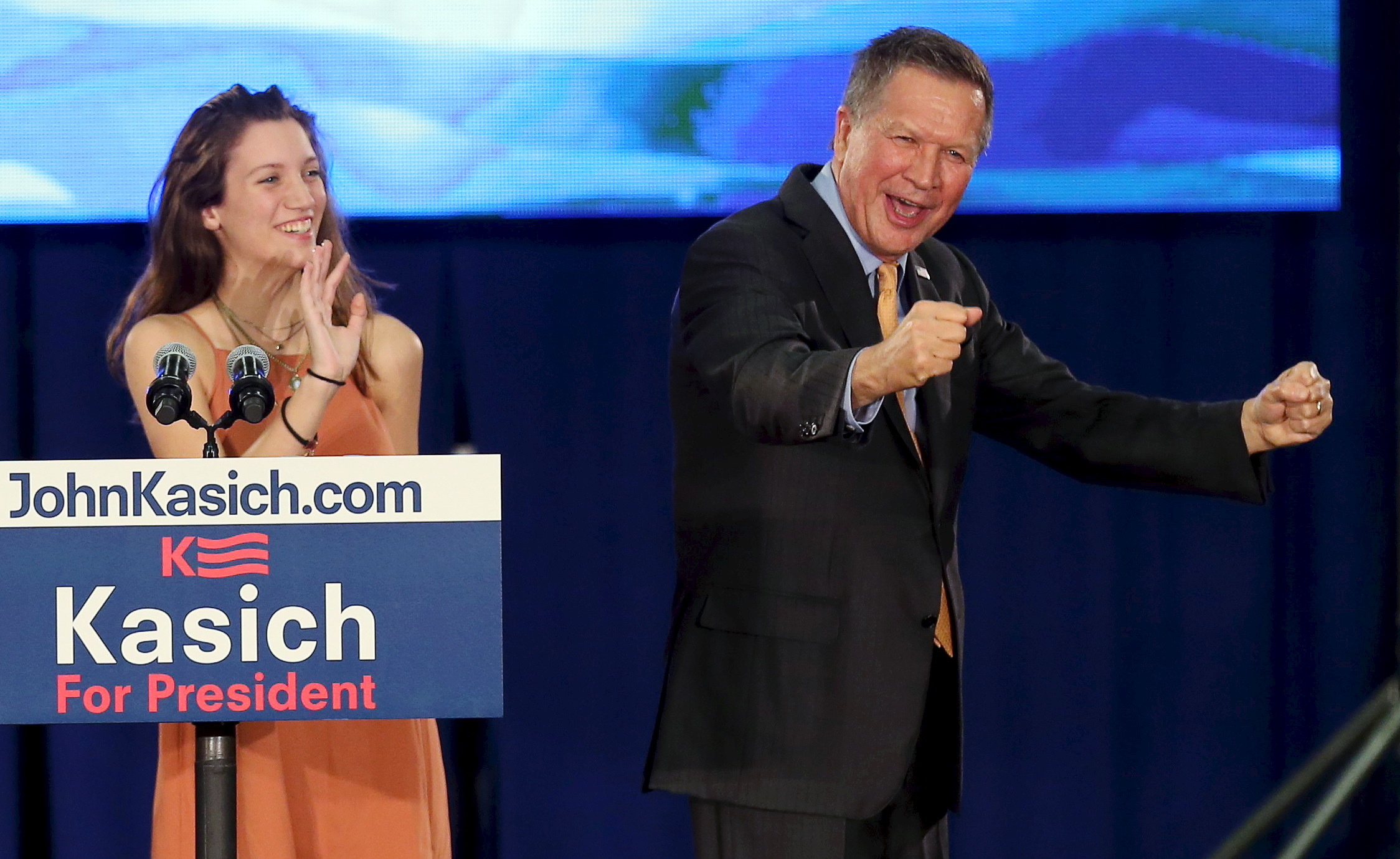 Republican U.S. presidental candidate Governor John Kasich celebrates his win in the Ohio primary election next to his daughter Rees during a campaign rally in Berea, Ohio, March 15, 2016. REUTERS/Aaron Josefczyk.

Kasich’s op-ed comes after the former governor gave a climate change talk in Canada. In an interview given before the speech, Kasich said he backed a carbon tax or cap-and-trade program, and claimed he’s bought a Tesla with taxpayer subsidies.

“It’s time for free-market moderates on both sides of the aisle to come up with answers of their own,” Kasich wrote.

“They can start with a carbon tax or a cap and trade program, which is a market-based trading system to incentivize carbon reduction,” Kasich wrote. “We also need to continue research supporting Corporate Average Fuel Economy standards, the automotive fuel-efficiency requirements that have significantly reduced greenhouse gas pollution in recent years.”

“It’s also important to continue subsidies for electric vehicles, clean-energy transportation that might not exist if fuel-efficiency mandates hadn’t spurred innovators to explore alternatives,” Kasich wrote. “Related to that, we need more research in battery technology, and not just for electric vehicles.”

Kasich called for spending “a lot of money, not a measly few pennies” on research that will “drive advances in energy derived from renewables — solar and wind — as well as natural gas” as well as “nuclear energy, using small-scale modular technologies now being developed.”

Kasich said in November he was “very seriously” considering a presidential run in 2020, though he has not made an announcement on the matter yet. Kasich lost the 2016 presidential primary to Trump, only winning the Ohio GOP primary race.