“We oppose federal loan guarantees for any energy source, period,” said Thomas Pyle, the president of the American Energy Alliance (AEA), in a Friday statement. “Nuclear power is an important part of our nation’s energy mix, but the federal government shouldn’t be in the business of providing loans for any energy source. Instead, it should stay out of energy markets and work to remove government subsidies and mandates to allow all energy sources to compete on a level playing field.”

The AEA’s statement comes after Perry visited Waynesboro, Georgia, on Friday and announced $3.7 billion in additional federal loans for the primary owners of a nuclear power project that has been beset with delays and cost overruns.

The Department of Energy is guaranteeing up to $1.67 billion in loans for Georgia Power, up to $1.6 billion for Oglethorpe Power, and up to $414.7 million for the Municipal Electric Authority of Georgia (MEAG Power). The three utilities are co-owners of the Vogtle Electric Generating Plant.

The loans are to help Vogtle’s construction of its two latest nuclear reactors: Units 3 and 4. The two units, which are the only nuclear reactors under construction in the entire country, were originally planned to be completed by 2017, but have been plagued with construction delays and ballooning costs. Unit 3 will not be ready to be loaded with fuel until 2020, and Unit 4 won’t go online until 2021.

Construction of the two units are expected to cost a total of $27 billion, and the announcement by Perry on Friday marks a total of $12 billion in federal loan guarantees to help keep the project afloat.

Vogtle’s struggles have been emblematic of the country’s nuclear industry.

The U.S. nuclear fleet is suffering under an unfriendly market. Competing against cheap natural gas and subsidy-backed renewables, numerous nuclear plants have been rendered unprofitable. Six nuclear plants closed in just the past six years. The horizon does not look much better for nuclear proponents, with nine other plants expected to shut down by 2025. 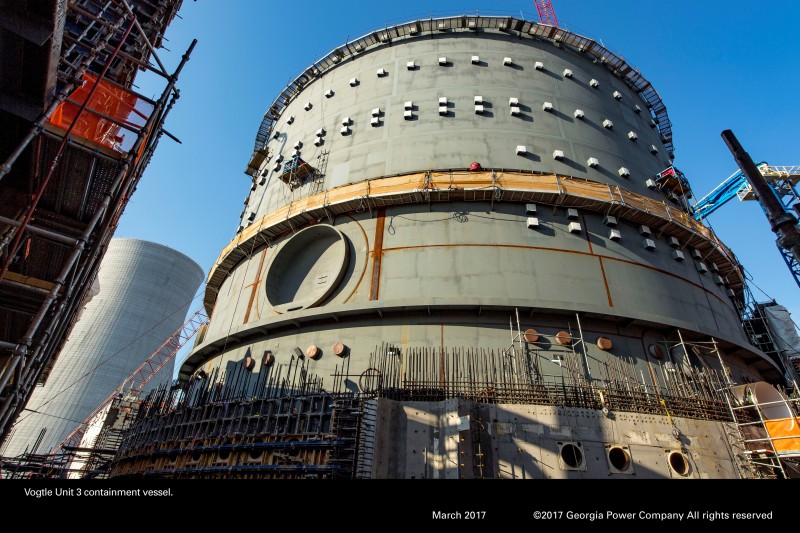 The Vogtle Unit 3, being constructed by primary contactor Westinghouse, a business unit of Toshiba, near Waynesboro, Georgia, U.S. is seen in an aerial photo taken March 2017. Georgia Power/Handout via REUTERS

However, the Trump administration, along with a growing number of climate activists, is raising concerns over the plight of the nuclear industry, realizing that the closure of these plants means the end of a major source of zero-carbon energy. Unlike solar or wind, nuclear can generate large amounts of electricity — and unlike fossil fuels, it can do so while releasing no carbon emissions. (RELATED: Why Are Record Amounts Of Cash Being Dumped Into Georgia’s Utility Commissioner Race?)

“The Vogtle project is critically important to supporting the Administration’s direction to revitalize and expand the U.S. nuclear industry,” Perry said Friday, calling the two reactors the “real” Green New Deal. “A strong nuclear industry supports a reliable and resilient grid, and strengthens our energy and national security.”

However, free market and consumer groups have continued to criticize the federal government’s assistance of Vogtle, with the AEA calling for the Trump administration to stay out of energy markets entirely.

The Department of Energy did not respond to a request for comment from The Daily Caller News Foundation in time for publication of this article.