Calls to abolish the electoral college are all the rage these days, but they aren’t new. One such attempt in 1956 was thwarted with the help of a Democratic senator from Massachusetts — a young John F. Kennedy.

The Senate was debating Senate Joint Resolution 31 on March 20, 1956, a “follow-up to what was originally labeled the Lodge-Gossett proposal,” author and law professor Robert Hardaway told The Daily Caller.

The bill was a proposal for a Constitutional amendment that would have allocated electoral votes, as Tennessee Democratic Senator Estes Kefauver described it, “whereby the federal vote of a state would be divided in proportion to the popular vote,” or what would have essentially been a national popular vote.

Responding to a question from Texas Senator Price Daniel during floor debate, Kennedy issued a strong response against the proposal:

But in answer to the Senator’s question, I maintain that on practical grounds the people in the smaller States, would be deprived of their electoral vote on the basis put by the Senator.

Mr. President, Senate Joint Resolution 31, concerning which there has been little, if any, public interest or knowledge, constitutes one of the most far-reaching, and I believe mistaken-schemes ever proposed to alter the American constitutional system. No one knows with any certainty what will happen if our electoral system is totally revamped as proposed by Senate Joint Resolution 31 and the various amendments which will be offered to it. Today, we have a clearly Federal system of electing our President, under which the States act as units. Today, we have the two-party system, under which third parties and splinter parties are effectively discouraged from playing more than a negligible role. Today, we have a system which in all but one instance throughout our history has given us presidents elected by a plurality of the popular vote …

… And today we have an electoral vote system which gives both large States and small States certain advantages and disadvantages that offset each other.

Now it is proposed that we change all this. What the effects of these various changes will be on the Federal system, the two-party system, the popular plurality system, and the large-State-small-State checks and balances system, no one knows. Nevertheless, it is proposed to exchange this system-under which we have, on the whole, obtained able Presidents capable of meeting the increased demands upon our Executive-for an unknown, untried, but obviously precarious system which was abandoned in this country long ago, which previous Congresses have rejected, and which has been thoroughly discredited in Europe. 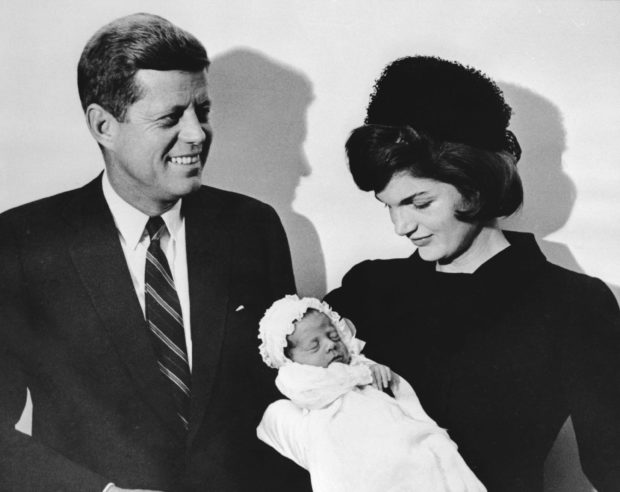 Picture taken 10 December 1960 showing John F. Kennedy and his wife Jacqueline holding their son John during the christening ceremony at the chapel of Georgetown university. Researchers found John F. Kennedy Jr body 21 July 1999 and wreckage from the plane he was piloting when it crashed in the Atlantic Ocean. (SAM SCHULMAN/AFP/Getty Images)

Hardaway, a law professor at the University of Denver Sturm College of Law and the author of the soon-to-be-released book “Saving the Electoral College: Why the National Popular Vote Would Undermine Democracy,” compared the French elections in 2017, when the French “were given the choice between two candidates opposed by the vast majority of French voters,” to what Democrats are proposing for the United States. Hardaway argued that Ross Perot could have conceivably won the 1992 election were it based on popular vote alone. (RELATED: Presidential Historian Doug Wead Explains Why The Founders Set Up The Electoral College)

“Consider what would have occurred had the U.S. presidential election been held in May of 1992,” Hardaway wrote in a paper submitted to The Daily Caller. “Polls showed that Perot would win 33 percent of a hypothetical ‘popular vote,’ Bush 28 percent, and Clinton 24 percent, with the rest undecided or for fringe  candidates. Under NPVIC, Perot would have been elected outright since it doesn’t even provide for a ‘run-off.'”

“In the end, the attempts to abolish the Electoral College failed once the wisdom of John Kennedy’s words were heeded,” Hardaway continued. “Had it not been for the ‘Grand Compromise’ which induced the smaller states to join the union with the Article V guarantee that they could not be deprived their equal suffrage in the Senate upon which their presidential voting power was based, the United States would never have been formed. Indeed, until that guarantee was included in the Constitution, the thirteen colonies were already breaking up into several different nation ‘states,’ leading the advisors to King George to gloat that America was falling apart and would soon ‘openly concert measures for entering into something like their former connections to Great Britain.'”