The Netflix documentary series “Our Planet” is using chilling footage of walruses falling off a cliff to mislead viewers in the name of climate activism, a Canadian zoologist claimed.

“Our Planet,” narrated by famed naturalist and BBC broadcaster David Attenborough, has a message: Climate change is endangering the planet. But it’s a message that comes at the expense of the facts, according to Susan Crockford, a zoologist and adjunct professor at the University of Victoria.

Crockford argues the Netflix documentary’s iconic scene of walruses falling to their deaths is actually the same incident recorded in Siberia in October 2017. Polar bears were behind those plummeting walruses, not global warming as “Our Planet” told viewers.

“The lie being told by Attenborough and the film crew is that 200-300 walruses fell during the time they were filming, while in fact they filmed only a few: polar bears were responsible for the majority of the carcasses shown on the beach below the cliff,” Crockford wrote on her personal blog Sunday.

The documentary’s viral walrus scene was filmed at the Kozhevnikova Cape, near the town of Ryrkaypiy. The same place where, in 2017, a group of roughly 20 polar bears spooked a herd of about 5,000 walruses resting near the cliffs, sending many to their deaths. Crockford says “Our Planet” filmed the same, widely publicized, walrus haul-out, but neglected to mention the polar bears that spooked the walruses. (RELATED: What’s 2020 Hopeful Jay Inslee’s Plan To Address The Immigration Crisis? ‘Attack Climate Change’) 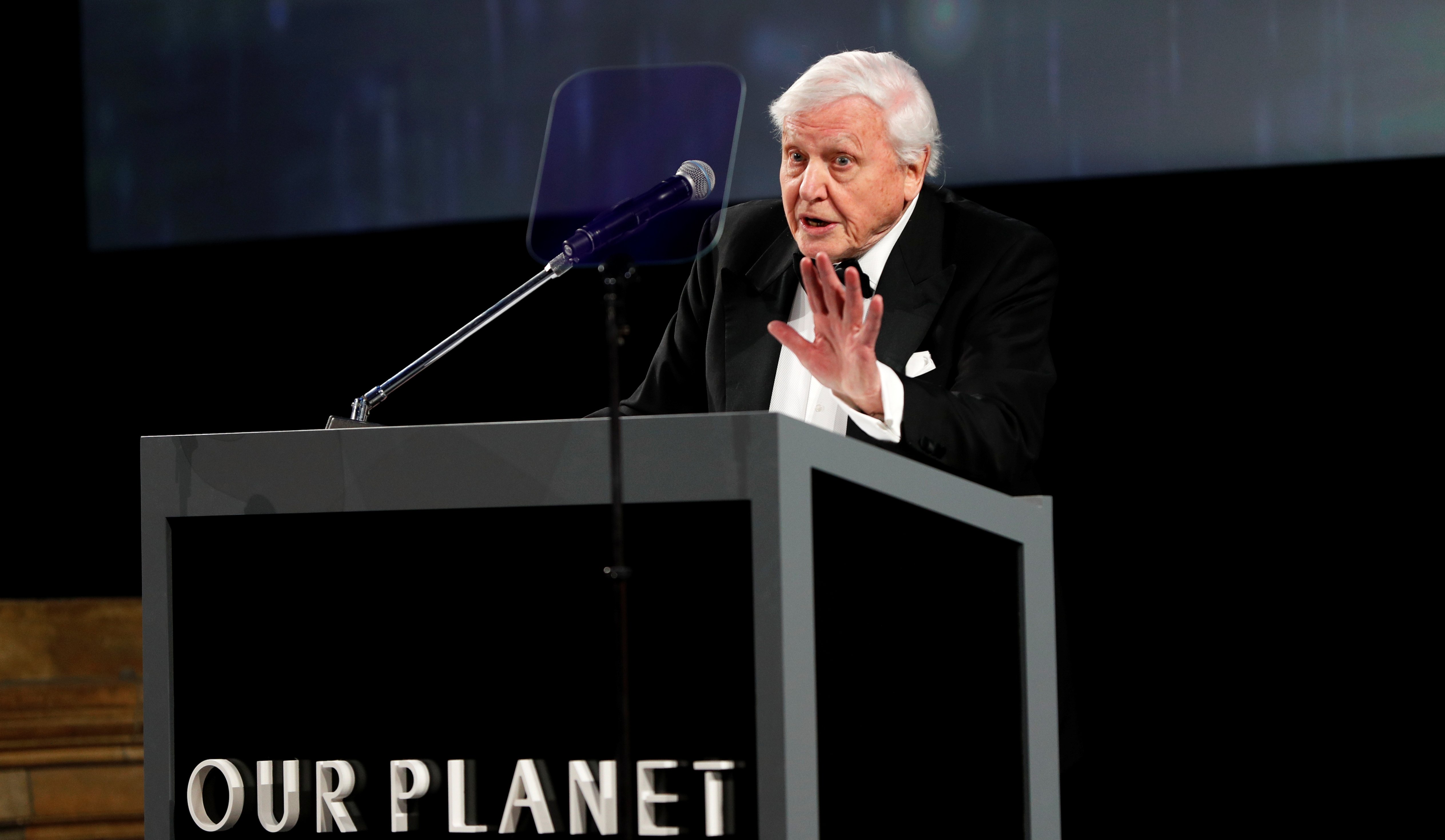 British naturalist David Attenborough gives a speech during the global premiere of Netflix’s “Our Planet” at the Natural History Museum in London, Britain April 4, 2019. REUTERS/John Sibley.

“Our Planet” was produced in conjunction with the World Wildlife Fund (WWF), a prominent environmental group. Each episode highlights an important ecosystem they see as threatened by man-made climate change.

Walruses, the new symbol of climate change. They’d be on ice if they could. ???? #OurPlanet #Gogglebox #FightForYourWorld pic.twitter.com/I5LCxo5Ka5

The U.K. Telegraph reported that in bonus footage from the “Our Planet” episode, “many polar bears were seen prowling the tops of the cliffs,” but those polar bears were not seen in actual episode.

“I can only conclude, therefore, that the two incidents are indeed essentially one and the same: that the filmmakers, probably alerted by resident WWF employees at Ryrkaipiy, moved in after polar bears caused hundreds of walrus to fall to their deaths,” Crockford wrote. “The crew then captured on film the last few falls over the cliff as the walrus herd moved away from the haulout.”

“This is, of course, in addition to the bigger lie that lack of sea ice is to blame for walrus herds being onshore in the first place,” Crockford wrote.

“Fundamentally, the reason walrus used this haul out location is because of a lack of sea ice in the region, meaning they are coming ashore more frequently than they did in the past,” Lanfear told The Telegraph. “Especially mothers with their pups. And at this particular site, once the beach below the cliffs was full, they  spread out and up the cliffs and were unable to find their way safely down, with tragic consequences.”

Wildlife experts, however, remained skeptical that climate change had anything to do with walrus cliff-diving. Experts have documented many past instances of walrus haul-outs, including those where animals fall to their deaths.

“Walruses have shown similar behavior on the U.S. coastline when space and ice were not an issue, and the reason is unknown,” Lori Polasek of the University of Alaska Fairbanks told The Atlantic. 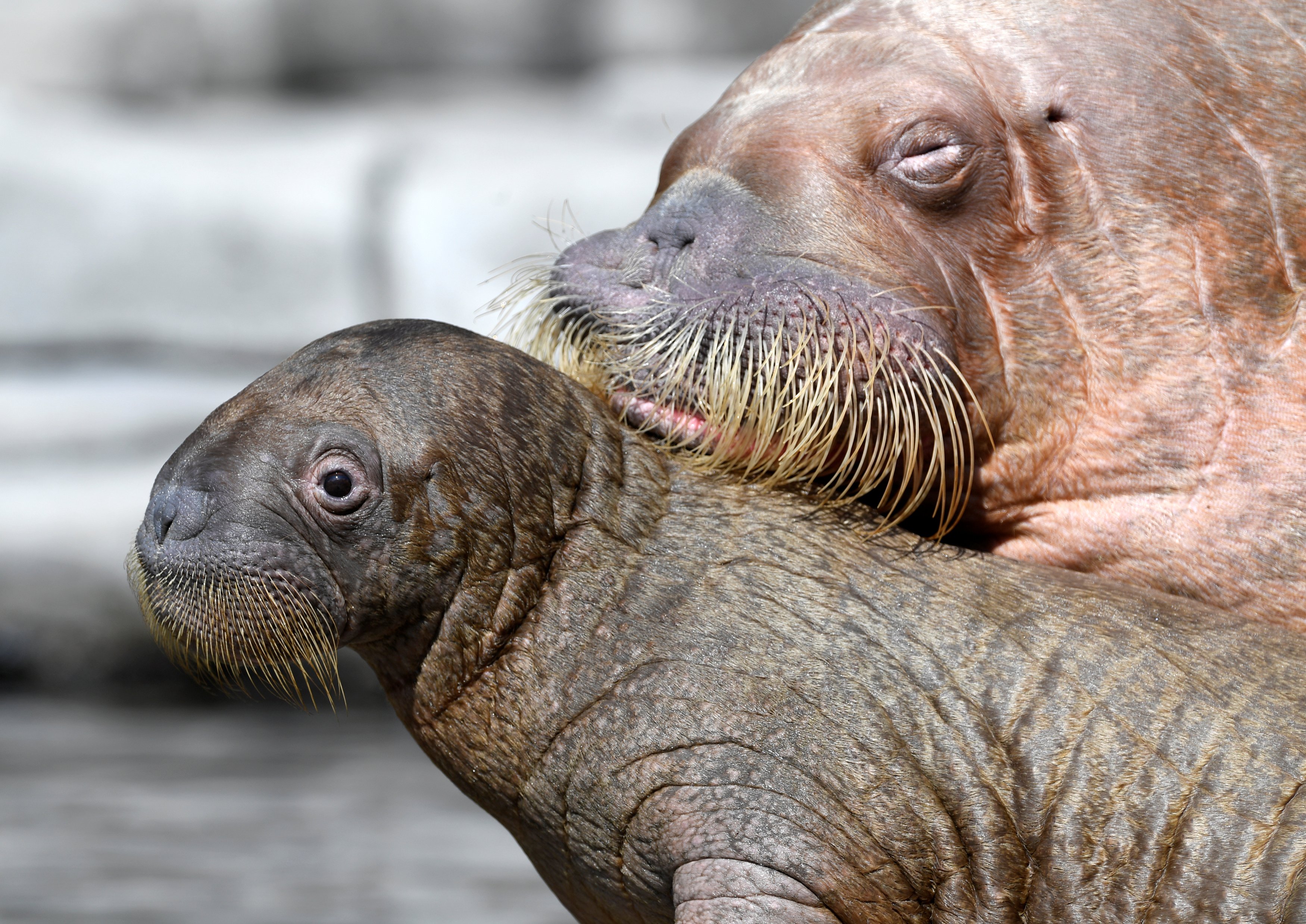 Walrus Dyna and her unnamed calf, born on June 17 in the Hagenbeck Zoo, are seen in their compound as they are presented to the public in Hamburg, Germany August 3, 2018. REUTERS/Fabian Bimmer.

Experts recorded that dozens of male walruses fell from cliffs in southwest Alaska in 1996, and large walrus haul-outs, including ones with females and calves, have been recorded for decades.

Experts with the U.S. Fish and Wildlife Service (FWS) reported in 2017 that “large mortality events from trampling have occurred at coastal haulouts as recently as 2007.” Younger, smaller walruses can get trampled in the crowds, especially when the herd gets spooked.

Predators, like bears, or human interference — hunters, machinery or vehicle noise — can spook walruses and even cause them to fall off cliffs as was observed nearly two years ago at the Kozhevnikova Cape.

Walruses are dependent on sea ice for some activities, like breeding and birthing, but are remarkably adaptive even in the face of shrinking sea ice coverage. Experts say walrus haul-outs have become larger and persist longer, but it’s not clear that’s completely due to a lack of sea ice. Other factors might be driving walruses to certain locations to haul-out onshore.

However, “Our Planet” seems to have filmed the controversial walrus scene in the fall, when haul-outs have traditionally been observed.

“In the 1950s-1970s, these haulouts typically persisted from September through October but more recently these haulouts have been occupied from August through December,” FWS noted in its 2017 report. 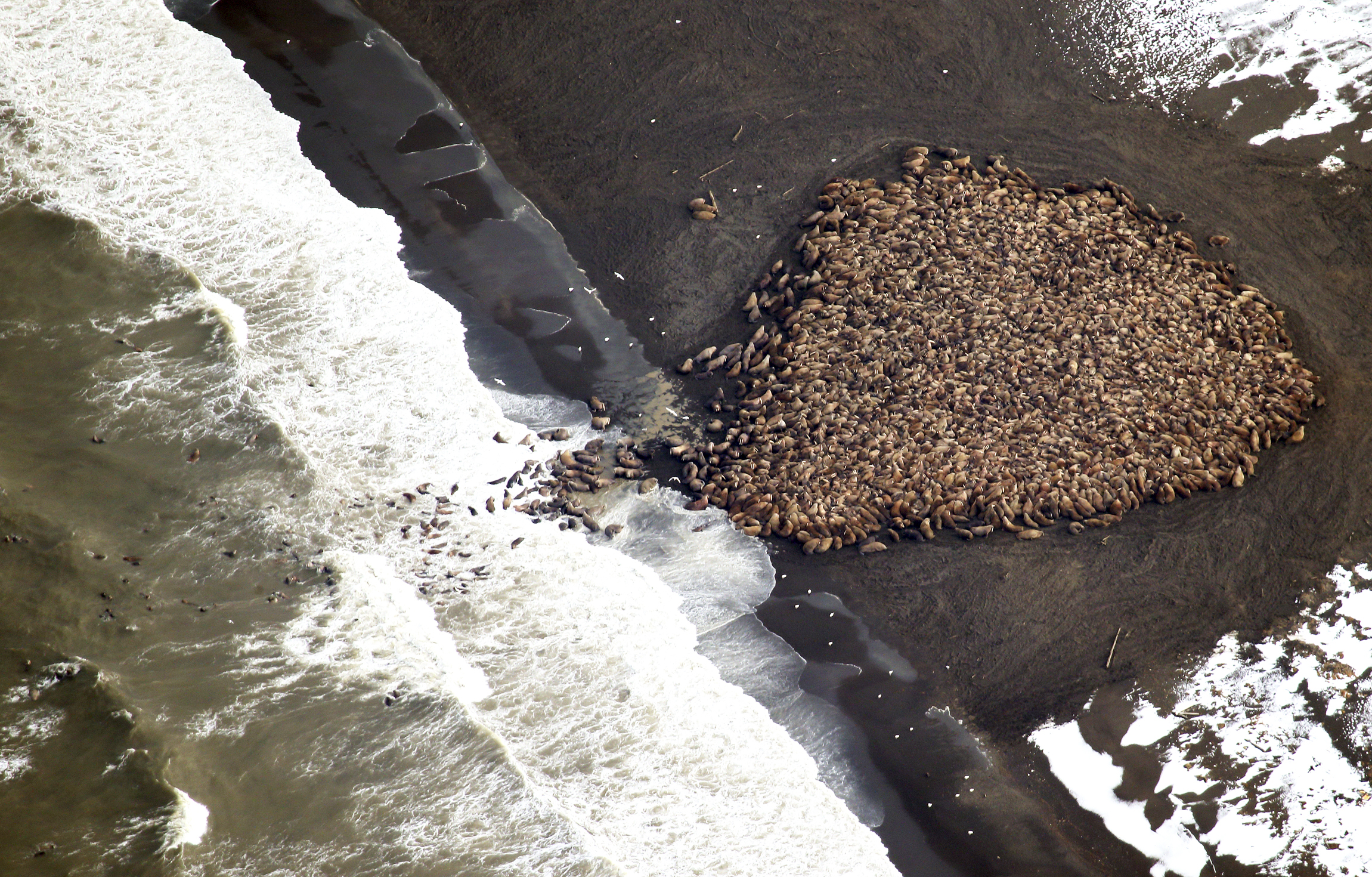 An estimated 35,000 walruses are pictured are pictured hauled out on a beach near the village of Point Lay, Alaska, 700 miles northwest of Anchorage, in this September 2014 handout photo. REUTERS/Corey Accardo/NOAA/NMFS/AFSC/NMML.

Experts, however, questioned other claims made by “Our Planet” about walrus haul-outs, including the contention that walruses scaled cliffs to escape large crowds.

The Alaska Department of Fish and Game’s Lori Quakenbush also noted that walruses don’t scale cliffs to avoid crowds, as the Netflix documentary asserts. Walruses end up on top of cliffs after walking up shallow slopes.

“Walruses thrive on crowds and haul out in tight groups, even when space is available,” Quakenbush told The Atlantic.

FWS declined to list walruses as “threatened” under the Endangered Species Act in 2017.

“Currently, the population exhibits degrees of resiliency, representation, and redundancy that have likely facilitated population persistence through past climate warming and cooling and population bottlenecks over longer periods with no detectable loss of genetic diversity,” FWS found.

“Indices of population status suggest the population is demographically and physiologically resilient to the current levels of sea ice loss,” FWS added.