The Notre Dame Cathedral in Paris is still standing after suffering extensive damage from a fire that consumed its roof Monday, but the building’s main structure is still in danger, according to one expert.

“It’s wonderful that what has survived, survived,” professional architect and professor James McCrery told The Daily Caller News Foundation. But “it’s vital that the building is stabilized.” (RELATED: People Fall To Their Knees In Prayer As They Watch Notre Dame Burn)

McCrery has designed cathedrals in the United States and is the director of traditional and classical architectural studies at Catholic University of America in Washington, D.C.

Medieval cathedrals such as Notre Dame are constructed so that the entire structure supports itself through a system of vaulted ceilings, flying buttresses and other architectural pressures. The solid construction might keep the building standing for hundreds of years, but if one part suffers damage, the rest of the structure could be compromised until it fails completely.

The fire began in the middle of Notre Dame’s roof around the church’s iconic spire. The roof, covered in sheets of lead and supported by centuries-old wooden trusses, provided the “perfect environment for the rapid spread of a very violent flame,” McCrery said.

French officials say the cathedral appears to be structurally stable following the blaze, though the church will be unsafe to enter for at least a couple days, The New York Times reports.

Between the cathedral’s ceiling, called the vault, and the roof outside is a vacuous, dry space filled wooden beams and plenty of oxygen. The fire began close to the center of the ceiling and spread outward in all directions, the worst-case scenario for firefighters trying to control the blaze.

“It got so hot that it then began to melt the metal roof that covered it on the outside,” McCrery told TheDCNF. “Melting the lead admitted even more oxygen from outside of the roof. Once that was done, once the fire got through the roof membrane of lead and exposed itself to the outdoor air, then the fate of the roof was settled.” 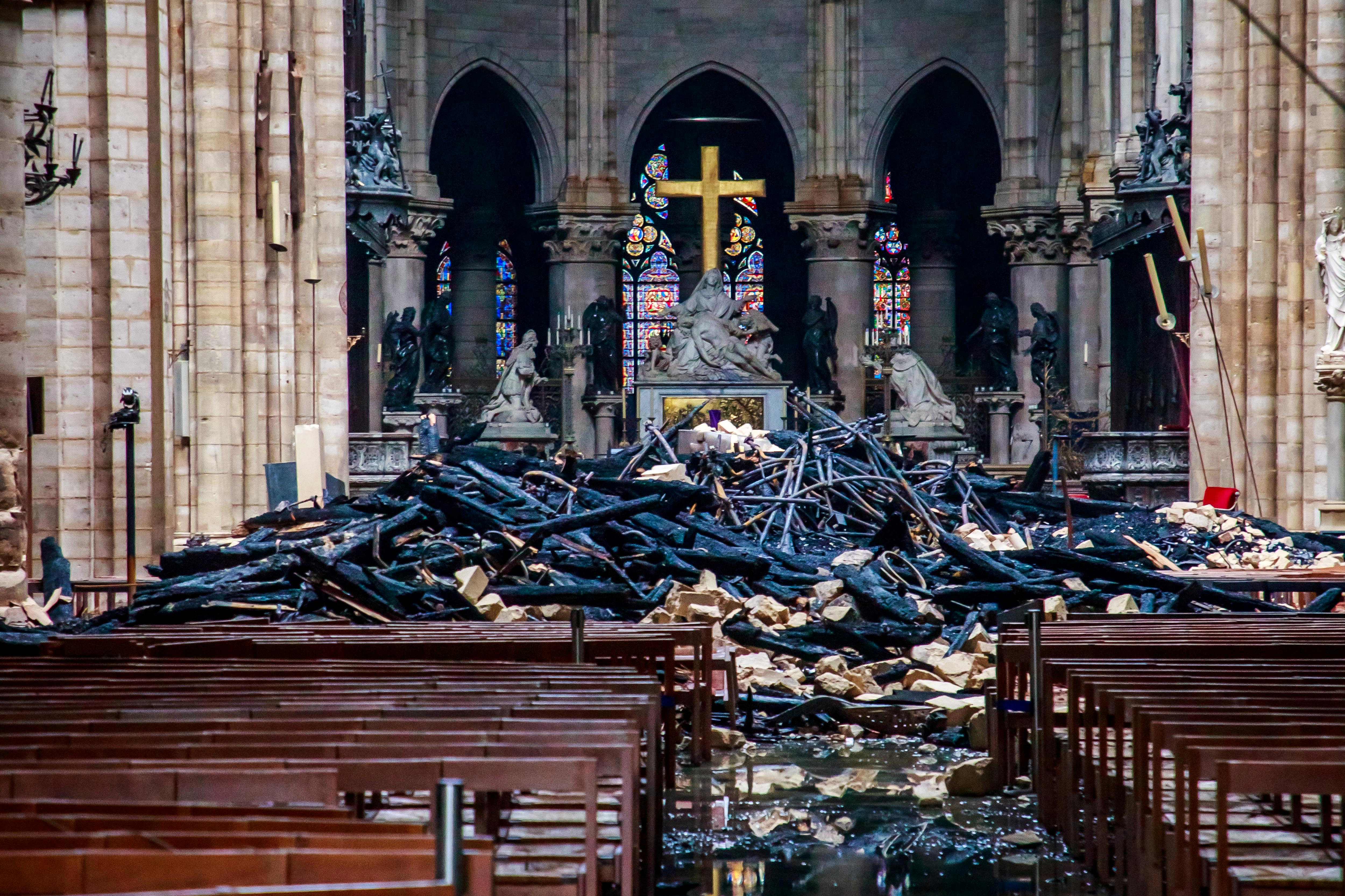 A view of the debris inside Notre-Dame de Paris in the aftermath of a fire that devastated the cathedral, during the visit of French Interior Minister Christophe Castaner (not pictured) in Paris, France, April 16, 2019. Christophe Petit Tesson/Pool via REUTERS

The inferno consumed much of the ceiling’s wooden framework, likely compromising the integrity of the entire building. French officials are in a precarious position where they need to quickly support the rest of the cathedral or risk the entire structure falling down.

The missing trusses were a key part of the building’s structure, sitting on top of the cathedral’s walls and holding the tops of the walls in place.

“Now that those trusses are all gone, 100 percent missing, then there’s a weakness,” McCrery told TheDCNF. “There’s an inherent weakness now, an inherent instability, in the structure that remains.”

McCrery could not give a timeframe within which the French have to save the building. The cathedral has not crumbled yet, though, because most of the building’s vaulted ceiling remained intact after the fire, keeping the walls from toppling inward under the pressure of the flying buttresses pushing the walls in from the outside.

UPDATE: This article has been updated to include French officials’ evaluation of Notre Dame’s damage.