One hundred twenty-five volunteers gathered in front of Facebook’s New York headquarters on Sunday morning and got naked as part of an art installation against Facebook and Instagram’s “censorship of artistic nudity.”

Around 5:30 in the morning on Sunday, the protesters met in front of Facebook and laid down naked with big cut-outs of male nipples covering their genitalia.

The protest was called “#wethenipple” and was organized by the National Coalition Against Censorship (NCAC) and artist Spencer Tunick, who was responsible for photographing the protest as part of an art installation.

Male nipples were used because Facebook’s algorithms allow them, Nora Pelizzari, the director of communications for NCAC, told TheDCNF. Women nipples, on the other hand, are not allowed, she said.

Pelizzari said that the goal of the “art action” was manyfold. First, it was meant as an art project for Tunick, who creates controversial art such as Sunday’s nude protest event. It was also meant as a “protest to draw attention to the policies on Facebook that are dramatically” affecting artists, Pelizzari told TheDCNF.

“They allow nudity in paintings and sculptures but they do not allow artistic nudity in photographs,” Pelizzari said. “It’s concerning that they are so very strict…about the art that is allowed to be posted on the platform.” 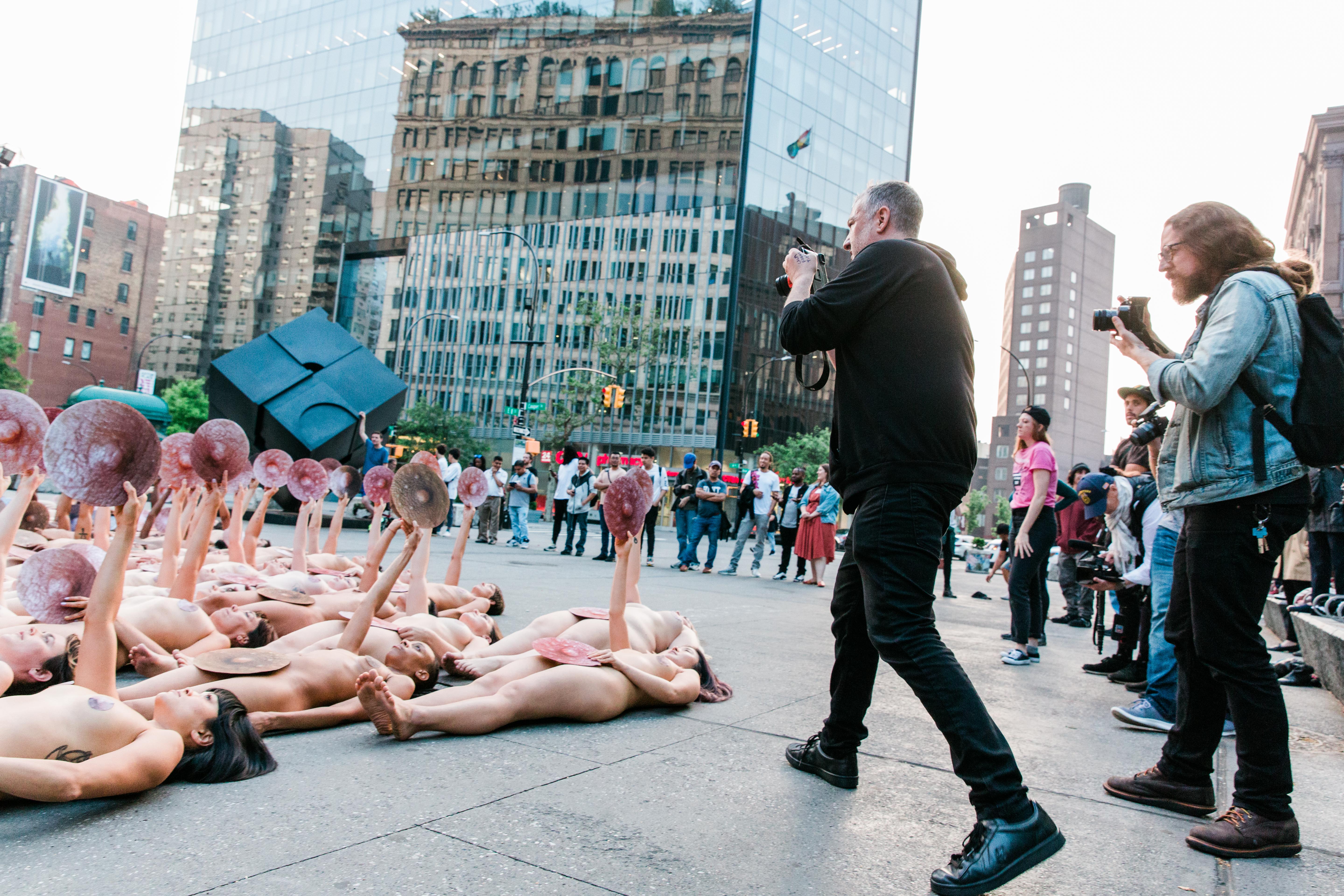 Pelizzari told TheDCNF that as of Monday morning, Instagram, owned by Facebook, had removed the “#wethenipple” along with about 500 photos of the event and by other artists in support of the campaign.

“Our hashtag has been banned from Instagram,” Pelizzari said. “Over 500 posts about the art action have been removed. It demonstrates just how impactful and at times sort of incorrectly applied those guidelines are.” (RELATED: Instagram Explains Why It Effectively Shadow Banned A Pro-Life Group’s Content)

Stephanie Otway, a representative for Instagram, told TheDCNF Monday afternoon that the “hashtag was blocked in error” and would be re-instated. She also said that Instagram would “be reviewing images shared to the hashtag and reinstating those that were removed in error.”

Dawn Robertson, founder of the women’s rights group Grab Them By The Ballot, was one of the participants of Sunday’s protest. She participated in the demonstration because of her “passion about censorship” and as a way to “raise awareness and create shifts in the way we view female sexuality, female nudity and bodily sovereignty,” she told TheDCNF.

“It was really well orchestrated,” Robertson said to  TheDCNF. “It went really smoothly. It was such a powerful image. It was amazing, we were right outside of Facebook headquarters.”

Robertson said that no one got in trouble for the event, and that there were some police standing by who were “really friendly.”

Both Pelizzari and Robertson’s groups have been censored multiple times on Facebook and Instagram. Facebook has permanently banned Grab Them By The Ballot from advertising, Robertson said.

“If I want to do coaching, I plan on writing a book, nope,” said Robertson. “They don’t tell you specifically what you can advertise. It’s like playing Russian Roulette. A painting got us banned, not even a photo.” 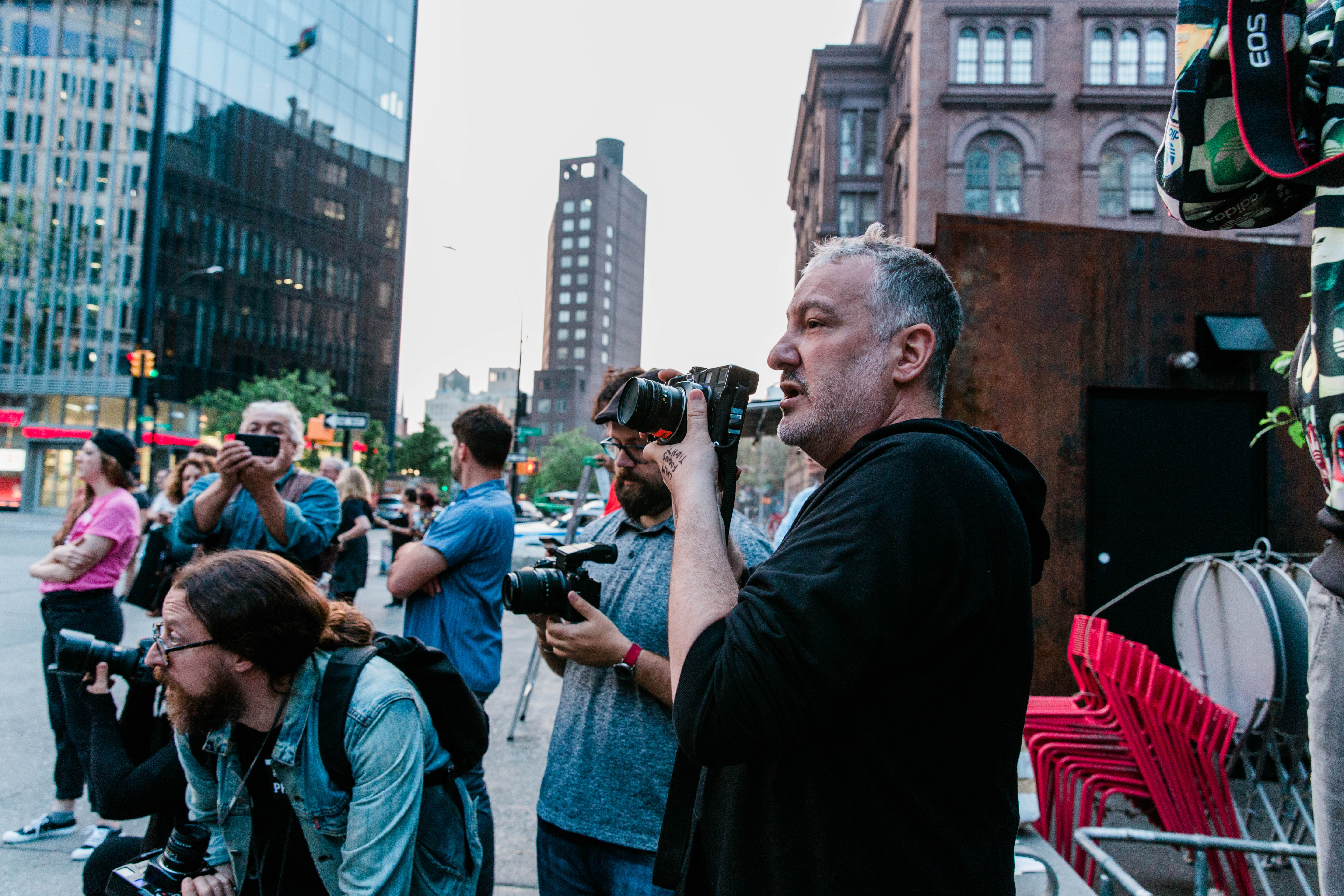 “We know that there are times when people might want to share nude images that are artistic or creative in nature, but for a variety of reasons, we don’t allow nudity on Instagram,” the site says. Photos of “post-mastectomy scarring and women actively breastfeeding are allowed.”

Facebook restricts nudity content because “some people in our community may be sensitive to this type of content.” They say that their nudity policies have “become more nuanced over time.”

“We understand that nudity can be shared for a variety of reasons, including as a form of protest, to raise awareness about a cause, or for educational or medical reasons,” Facebook’s community guidelines state. “Where such intent is clear, we make allowances for the content.”

Pelizarri told TheDCNF that Facebook is aware of the event and have shown interest in talking to us further, stating that they have “recognized that this is a problem.”

“We are very hopeful that Facebook is genuinely interested in serving the artistic community,” Pelizarri said. “This is a nonpartisan issue. This isn’t politically motivated, this is art and everyone benefits from art. Art crosses national, international, political lines and so this is really a step that Facebook could take to empower an important and often silenced community, which is artists.”