A1016/S101, which passed the Assembly 51-23 and the Senate 24-13 in June, forms a “smart gun” commission and mandates gun retailers offer models equipped with trigger-lock technology 60 days after one becomes available for commercial sale and gets commission approval, the NJ Advance reported.

“We take great pride in having some of the toughest gun laws in the United States,” Murphy told reporters at a June 19 press conference in Westfield, where a man with a handgun was arrested outside of the Tamaques Elementary School June 14.

New Jersey passed smart gun bills twice before, only to have them vetoed by then-Gov. Chris Christie, a Republican, who called them “reflective of the relentless campaign by the Democratic Legislature to make New Jersey as inhospitable as possible to lawful gun ownership and sales.” 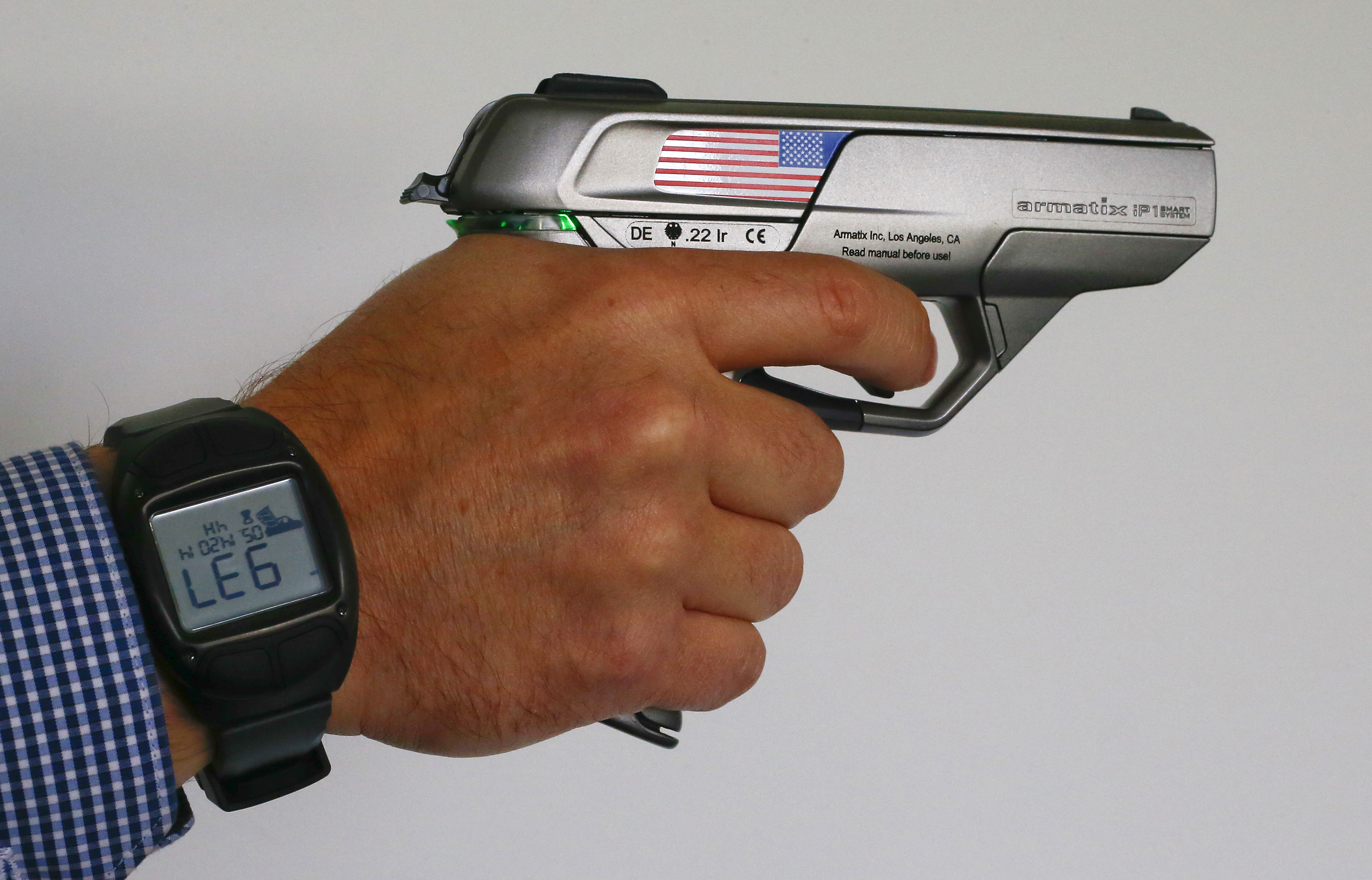 An Armatix employee holds a smart gun by the company at the Armatix headquarters in Munich May 14, 2014. The gun is implanted with an electronic chip that allows it to be fired only if the shooter is wearing a watch that communicates with it through a radio signal within 10 inches. REUTERS/Michael Dalder

The idea behind a “smart gun,” which was first developed by Smith & Wesson in the late 1990s, according to Bloomberg, is that they are personalized to be operated by the gun’s owner only. After Smith & Wesson agreed to develop a model for the U.S. government in 1999, the NRA organized a boycott and the gunmaker backed off the concept.

After 20 years of research and development, smart-guns are being developed by several companies and use various technologies to render a gun inoperable when it is being operated in an unauthorized manner. (RELATED: Ammo Storage And Malfunctions: Yes, They Can Be Related)

Grip fingerprint sensors, rfid embedded chips that match one worn by the user, GPS locators to determine a gun’s location, ‘smart bullets’ that detect untrained movement like shaking, and miniature cameras that recognize improper operation are just some of the prototype technologies being developed, according to a 2016 report by Nation Swell.

While “smart gun” prototypes exist, no models are yet available in the U.S. for sale, according to the NJ Advance. A German-American company called Armatix introduced the iP1 model in 2014, a gun considered viable in the “smart gun” market but the company went bankrupt after rumors of unreliability led to retailers failing to stock it, The Trace reported.

The lack of commercially available models has stopped other states from passing legislation mandating their sale, although Maryland and Massachusetts are tracking their development and could potentially make them available once approvals are met, according to the Giffords Center.

The National Rifle Association has long objected to any laws mandating the sale of smart guns until the gun-rights group is satisfied with their reliability.

“Smart Guns are just that — a concept,” the NRA said in a recent article. “The NRA’s primary objection to so-called smart guns centers on governments mandating the sale of unreliable firearms.”

Other gun control bills waiting for Murphy’s signature include adding non-firearm-related convictions to the list of crimes that disqualify people from buying guns, encouraging gun dealers and gun range operators to attend suicide prevention courses, and increasing the criminal charge degree if someone who isn’t allowed to have a gun is found with one.

Murphy’s entire gun package includes 13 bills, five of which have yet to be introduced to the Senate. Murphy is pressuring Democratic New Jersey Senate President Steve Sweeney to move on the remaining measures before lawmakers are dismissed for the summer, according to the Associated Press.

“The Senate president can do the right thing by moving the entire gun safety package,” Murphy said.

1
Lev Parnas Gave Congress The Contents Of His iPhone, Including His Searches On Sex-Hookup Websites
Politics
2
'I'm Cutting You Off': Whoopi Goldberg Mocks And Interrupts Alan Dershowitz, Then Accuses Him Of Disrespect
Media
3
AG Barr Compares Working With Trump And Bush: 'I Love Both Men,' But Trump 'Listens'
Politics
4
'Don't Mess With Texas!': Beto-Backed Candidate Goes Down Hard In Closely-Watched Texas Race
Politics
5
'That's My Point': Alan Dershowitz Gets Sunny Hostin To Help Him Argue Against Impeachment Witnesses
US