Former Vice President Joe Biden argued it will take a “mainstream” Democrat to win in 2020, and said liberal stars like New York Democratic Rep. Alexandria Ocasio-Cortez are too far left to win over voters in a general election.

“I think Ocasio-Cortez is a brilliant, bright woman,” he told CNN. “But she won a primary. In general election fights, who won? Mainstream Democrats who are very progressive on social issues and very strong on education, health care.” 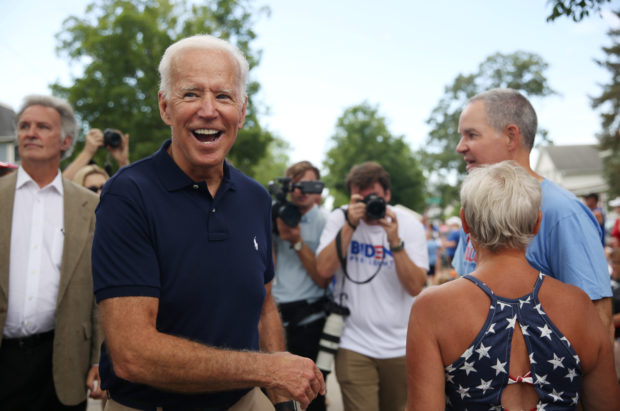 “Look, my North Star is the middle class,” he continued. “When the middle class does well, everybody does well.” He said the Democratic Party is relatively moderate. “Look, it’s center left, that’s where I am,” he said. “Where it’s not is way left.”

His remarks contrast sharply with remarks Friday from mayor and Democratic candidate Pete Buttigieg, who jumped in the polls following the first round of Democratic primary debates last week. Speaking at a campaign rally in Iowa, Buttigieg said the “riskiest” move the Party can make in 2020 is to “play it safe” with voters by not swinging far left enough.

“Surprisingly, the riskiest thing we could do is try so hard to play it safe, that we continue to walk down an establishment path,” he said. (RELATED: Julian Castro Wows In First Debate As Dems Try To Out Liberal Each Other)

The large Democratic field showed off an array of far-left positions in the first Democratic primary debates in Miami last week. A majority of the candidates expressed support for decriminalizing border crossings, providing taxpayer-funded healthcare to illegal immigrants, unlimited access to abortion and drastic economic changes for the sake of preventing climate change.

1
Chinese Markets Reopen — And They Still Sell Bats, Dogs And Cats
World
2
'This Is Mind Boggling': Arlington Store Owner Defends Employee Jailed For Shooting Masked Burglars
US
3
Tucker Carlson Airs Report Claiming Coronavirus 'Probably Originated From A Laboratory In Wuhan'
Health
4
'This Is Evil': MyPillow's Mike Lindell Punches Back At Jim Acosta, Other Media Critics Of White House Appearance
Media
5
New York Doctor: 'I Do' Think An End To Coronavirus Crisis Is 'In Sight'
US