Employees with Chinese telecommunications giant Huawei acknowledged working with China’s military-backed cyber agencies in a trove of job resumes leaked online in 2018, according to a study published Friday by a British think tank.

The employment files indicate some Huawei staff have worked as agents within China’s Ministry of State Security, worked on projects with China’s People’s Liberation Army (PLA), and were employed with a military unit linked to a cyber attack on U.S. companies, according to a study from Henry Jackson Society, a London-based think tank.

More than 100 Huawei staff had connections to the Chinese intelligence agencies and their “backgrounds indicated experience in matters of national security,” Christopher Balding, an associate professor at Fulbright University Vietnam, said in the study.

He argues the data refute every statement Huawei has made suggesting the company does not act as a handmaiden for the PLA. The study also comes after President Donald Trump announced after a June 29 meeting with Chinese President Xi Jinping the loosening of U.S. government restrictions on the company. The study highlighted three resumes in particular.

One Huawei manager has worked at the company since 2012, but had previously worked at the National Information Security Engineering Centre (NISEC), the study notes. NISEC reportedly “collaborated for years” with Unit 61398 of the Chinese Army. The unit is accused of being “at the heart of China’s alleged cyber-war against Western commercial targets.” 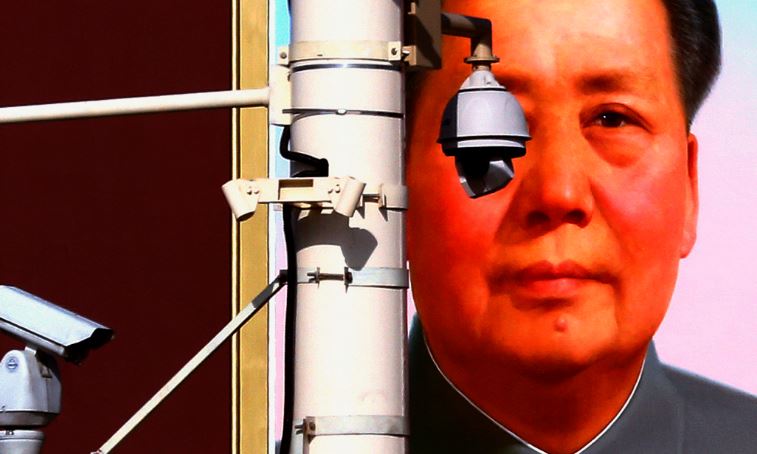 Security cameras are attached to a pole in front of the giant portrait of former Chinese Chairman Mao Zedong on Beijing’s Tiananmen Square November 11, 2012. REUTERS/David Gray

Another engineer was also linked to being a ‘representative’ of the Ministry of State Security (MSS), the security agency responsible for counter-intelligence and foreign intelligence. The Huawei engineer “served as a Ministry of State Security representative working for Huawei,” according to the join analysis between Balding and the Henry Jackson Society.

“It is important to note that the Chinese Ministry of State Security is the primary entity responsible for espionage and counter-intelligence,” Balding notes in the study. “It should raise immediate concern that MSS assets are working on networking equipment as representative agents for Huawei.”

The study is based on a massive leak of more than 590 million resumes from within China. (RELATED: Trump’s Reversal Of Huawei Sparks Outrage Among Dissenting Senators, Think Tanks)

Most of the resume leaks occurred in 2018 because of poorly secured internet databases and internet servers that were left exposed online without a password, or were revealed as a result of unexpected firewall errors. Researchers from a variety of open internet activist groups managed to compile much of the data for public distribution.

Balding’s findings come at an awkward moment for Huawei.

Trump placed strict restrictions on technologies from foreign adversaries in May, making more difficult for Huawei to gain access to critical applications from the likes of Google and other major American tech companies. The U.S.  has spent several months pressuring Britain and others to shy away from using Huawei to build out its fifth generation network.

Tech experts say fifth generation mobile service is the wave of the future and allowing China to take the lead on its buildup exposes the U.S. to cyber espionage.

The Chinese government built and financed a $200 million complex holding the African Union (AU) in Ethiopia. The building was completed and handed over to the Ethiopian government in January 2012. Media reports have since cast a negative light on China’s intentions.

France’s Le Monde published an investigation in January 2018, for instance, showing that from 2012 to 2017 servers based inside the AU’s headquarters were transferring data every night to unknown servers in Shanghai. It was also reported at the time that microphones hidden in desks and walls were detected and removed during a sweep for bugs.