A federal judge Thursday came close to throwing out charges against a former Michael Flynn business partner on trial in Virginia, saying the government had presented “very circumstantial” and “very speculative” evidence during its presentation of the case.

Speaking after prosecutors wrapped up their case against former Flynn associate Bijan Rafiekian, Judge Anthony Trenga said there were “substantial issues” with the government’s evidence, The Washington Post reported.

Rafiekian, a former executive at Flynn’s firm, Flynn Intel Group (FIG), is on trial on charges that he acted as an unregistered foreign agent of Turkey, and that he conspired to do the same. Both charges are felonies.

Prosecutors have alleged Rafiekian masked FIG’s work for the Turkish government by signing a $600,000 contract in August 2016 with a Dutch shell company called Inovo BV. As The Daily Caller News Foundation first reported Nov. 11, 2016, Inovo BV was owned by Ekim Alptekin, a Turkish businessman with links to the Turkish government. (RELATED: EXCLUSIVE: Michael Flynn Is Lobbying For Obscure Dutch Firm With Ties To Turkish Government)

Alptekin was indicted along with Rafiekian, but he is believed to be living in Turkey.

Trenga issued his critique of the case after prosecutors called their final witness on Thursday afternoon. Rafiekian’s lawyers made a routine motion to dismiss charges against the Iranian-American businessman.

“The evidence is extremely weak, entirely circumstantial and based mainly on hearsay,” Rafiekian attorney James Tysse said, according to Politico. “This should end it, Your Honor,” .

Trenga seemed to agree with the thrust of the argument.

“There are very substantial issues as to the sufficiency of the evidence,” Trenga said, according to WaPo. “It’s all very, very circumstantial. Much of it is very speculative.” 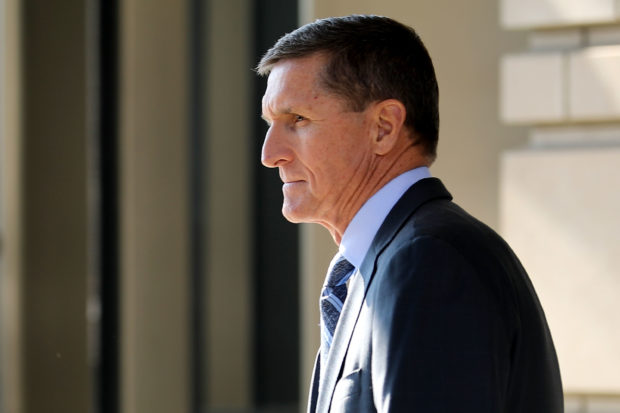 Michael Flynn, former national security advisor had a short visit to the White House with only 25 days in office. (Photo by Chip Somodevilla/Getty Images)

Despite the rebuke, Trenga said he would allow the trial to proceed. Closing statements are expected to start Monday.

The contract between Inovo BV and FIG called on Flynn’s company to investigate Fethullah Gulen, a Muslim cleric living in exile in the U.S. Turkey’s government considers Gulen a terrorist, and blame him for a failed coup attempt in Turkey in July 2016.

As part of the contract, Flynn published an op-ed in The Hill on Nov. 8, 2016, calling on the U.S. government to extradite Gulen.

James Courtovich, who operates the firm Sphere Consulting, testified as a government witness on Thursday. His firm helped place the op-ed with The Hill, and also worked on a “60 Minutes”-style documentary about Gulen that never materialized.

Courtovich described a contentious meeting with Alptekin in early November 2016, in which the Turkish businessman fumed about the quality of work produced by FIG and Sphere. Courtovich said Alptekin wanted congressional investigations of Gulen, and a full media blitz against the reclusive cleric.

“What am I going to tell Ankara?” Alptekin said, according to Courtovich.

Courtovich also said one day after a meeting with Alptekin, he was contacted by the deputy chief of mission at Turkey’s embassy regarding “the project.”

Courtovich also testified about a phone call that he had with Trump campaign lawyer William McGinley on Nov. 9, 2016, a day after Trump’s election win and Flynn’s publication of the Gulen op-ed.

“McGinley wanted to know the origins of the op-ed and if it was related to any program or contract,” Courtovich testified, according to Politico.

Flynn, a retired lieutenant general, cooperated with prosecutors in the case as part of a plea agreement in the special counsel’s Russia investigation. The government initially planned to call Flynn as a witness against Rafiekian, but abruptly reversed course July 3, saying they now consider Flynn to be an unindicted co-conspirator of Rafiekian’s and Alptekin’s.

Rob Kelner, a former lawyer for FIG and Flynn, testified Tuesday that Rafiekian expressed opposition to registering as a foreign agent of Turkey.

Brian McCauley, a former FBI official who contracted for FIG, testified Wednesday that Rafiekian told him he wanted the Gulen project to proceed “under the radar.” He also said Flynn was open to registering with the Justice Department under the Foreign Agents Registration Act, but that Rafiekian balked at the idea.

McCauley, who was a top official in the FBI’s international operations until he retired in 2015, also said Rafiekian asked him before the September 2016 meeting in New York City whether he still had access to classified files related to Gulen. McCauley told Rafiekian he did not.