Police unions are livid after bystanders posted videos to social media Monday showing New York City Police Department officers being doused in water and struck with buckets in the head over the weekend.

One video shows two officers making an arrest when they were ambushed by several individuals, doused in water and then struck in the head with the buckets. Another video shows a duo of officers walking away with their heads held low as a mob also dumps water onto them.

The DISRESPECT NYPD Officers are faced with today is DISGUSTING.
They are afraid to take action due to fear of public backlash and because NYC Mayor Bill De Blowsio will throw them under the bus! pic.twitter.com/zXIPmbfVwz

NYPD officers are being hit with objects and water while making an arrest in Harlem. #nypd #harlem @fox5ny https://t.co/E9jgwWmbQx

The people in the video may be laughing, but police union bosses are enraged. Ed Mullins, president of the Sergeants Benevolent Association (SBA), a 13,000-member New York-based police advocacy group, called the videos “disgusting” and “horrible.” He said his phone lit up all day from cops pleading with him to issue a statement on their behalf. (RELATED: McConnell’s Senate Challenger Likens Trump Election To 9/11, Police Association Grills Her)

Mullins spoke of the untold story of the victims of these attacks. The rookie officers — some with less than a year of experience — carried on their days at work in soaked uniforms, and they returned home without disclosing the events to superiors. Mullins told the Daily Caller News Foundation that one officer may even consider resignation due to the humiliation he incurred.

“In my 38 years in the NYPD, I’ve never seen it so unsafe for law enforcement, and I was a cop in the ’80s. Cops [used to be] harmed fighting crime not being victims of crime, that’s the difference,” Mullins told the DCNF. 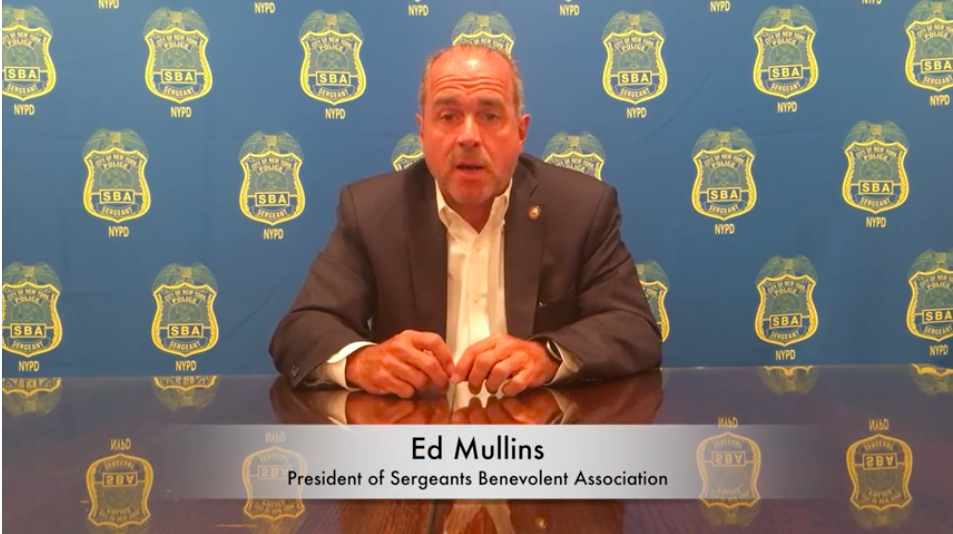 Saying it’s just water doesn’t fly with Mullins. He said in a statement that “it could’ve been bleach, gasoline or some other toxic substance … where does it end?”

Mullins is just as fed up with the videos as he is with New York City’s leadership. He slammed both Democratic NYC Mayor Bill de Blasio and NYPD Police Commissioner James O’Neill for failing to deter officer-related violence.

“It’s the leadership of the NYPD. It’s de Blasio with these kinder, softer, gentler policies,” Mullins told the DCNF. “The mayor is incompetent; the police commissioner is incompetent. The people who [de Blasio] circles himself with are nothing but ‘yes’ men.”

Leadership is important to Mullins, but he’s concerned that the officers were not defending themselves or arresting the suspects committing the assaults.

“There’s a sincere hesitancy to do anything because [cops] don’t feel as though they have the backing of the department,” Mullins said. “Any kind of force that gets used becomes the subject of discipline based on all the cameras and phones. There’s a hands-off policy.”

Unions outside of the New York City area were also appalled by the videos, echoing Mullins’ statements.

“I don’t know what those officers have been told, but it’ pretty apparent what they heard. And that was the best course of action was to take no action,” Dennis Slocumb, legislative director for the International Union of Police in Washington, D.C., told the DCNF.

Slocumb’s experience tells him two rookie cops with little experience should never be placed together. He added that they should’ve arrested the individuals for assault on a peace officer, and if they didn’t have enough guys, they should’ve called more to the scene.

O’Neill — according to Mullins — is to blame for this “hands-off” policy.

“When I asked why [the cops in the videos] didn’t do anything, I’m told they’re afraid of getting in trouble by the department,” Mullins said.

He added that O’Neill doesn’t have his priorities straight when it comes to policing and he doesn’t support his agency. He’s more concerned with public image than officer-safety policing, putting cops in “harms way,” Mullins said.

Both Mullins and Slocumb agree that anti-cop sentiment is a stain on the police force.

The NYC Police Benevolent Association concurs with the pair, saying officers “are frozen” due to “anti-police rhetoric and bad policy” coming from leadership.

Our anti-cop lawmakers have gotten their wish: the NYPD is now frozen. It’s not the fault of these police officers. It’s the end result of the torrent of bad policies and anti-police rhetoric that has been streaming out of City Hall and Albany for years now. https://t.co/2dxkz8cdyD

“To NY’s Finest: the work you do every day is remarkable. We trust you to do what is a very difficult job,” NYPD Chief of Department Terence Monahan said in a statement. “Use your discretion — make arrests when necessary — and know that you have our support and full confidence. Thank you for what you do day in and day out. Please stay safe.”

No statements were issued to the DCNF from O’Neill.

“The mayor needs to stop running for president because he’ll never win. He should come back and fix the problems in the city. O’Neill needs to resign,” Mullins said.