Congress is preparing to send a massive budget bill to President Donald Trump’s desk, a bill that the president is expected to swiftly sign.

The budget increases government spending by around $300 million to a grand total of $1.37 trillion, none of which includes funding for Trump’s long-promised border wall. Many conservatives are incensed by new federal spending as the nation’s debt approaches $22 trillion, as well as a lack of funding to deal with the border crisis. (RELATED: Another Horrible ‘Bipartisan’ Budget Deal)

Still, the White House and Republican leadership are adamant that the deal is actually a “compromise.”

They point to increased military spending, the exclusion of Title X funding for abortion providers such as Planned Parenthood, as well as the desire to avoid another government shutdown to lobby on the fence Republicans to support the bill.

So far, that strategy has fallen short. House Republicans sided overwhelmingly against the president and their leadership, with 132 out of 197 caucus members voting against the budget bill.

The opposition was led by the House Freedom Caucus, a group of conservatives representing the last gasp of a Tea Party movement that swept the party into power in 2010, but has been discarded in the age of Trump. 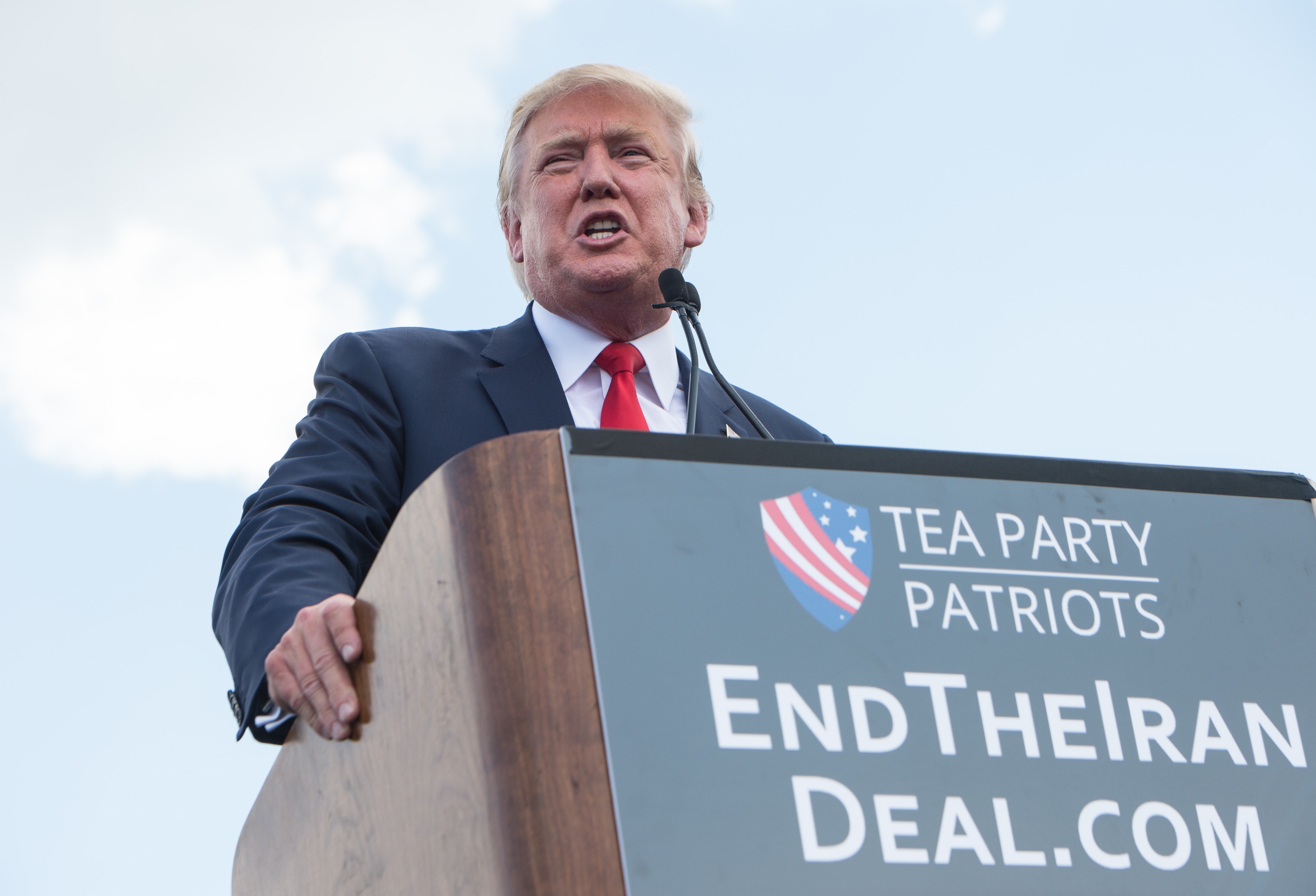 US Republican presidential candidate Donald Trump speaks at a rally organized by the Tea Party Patriots against the Iran nuclear deal in front of the Capitol in Washington, DC, on September 9, 2015.  (Photo credit: NICHOLAS KAMM/AFP/Getty Images)

“Many of us are gravely concerned that this budget deal not only raises spending but kicks the can down the road without doing anything substantive to rein in our deficit,” Freedom Caucus Chairman Mark Meadows of North Carolina told the Daily Caller.

Like every budget bill, nobody got everything they wanted. But, did the president really get much at all? Does it advance the goals of his administration, his supporters, and the mandate he was given when he was sent to Washington to drain the swamp?

During the 2016 campaign, Trump and most of his fellow Republican candidates promised to cut down the national debt, build a wall at the southern border, and defund Planned Parenthood. This budget doesn’t accomplish or even move the nation closer to any of those goals. In fact, when it comes to the debt, it moves the country further in the opposite direction, and some worry that the budget moves America closer to another financial crisis.

“At some point, we have to be willing to confront this issue in a serious way and stop bankrupting our children and grandchildren,” Meadows said.

“The deal allows unlimited borrowing until after the next election and eliminates the spending caps,” Paul tweeted earlier this week. “Every conservative in America should respond in outrage.”

The debt continues to grow with no signs of slowing down. The Trump administration has proposed major budget cuts in the past, but Congress has been reluctant to take it up. Cutting spending is widely considered to be bad politics, and another government shutdown would surely be considered unacceptable in the aftermath of what happened earlier this year when Congress and the president shut down the government for over a month while battling over funding for border security.

When the previous shutdown occurred in January, and Trump and Republicans were largely stuck with the blame, even by many conservatives. The failed gambit to obtain funds for his border wall is widely considered one of the low moments of Trump’s presidency, and the White House was not about to pick another fight even as the debt and border crises worsen. (RELATED: Cory Booker: Free Health Care For Illegal Immigrants Is Just Common Sense)

If Trump does follow through on his promise and sign the bill, he risks the wrath of fiscal conservatives who increasingly feel out of place in what has long been considered the party of fiscal responsibility.

Former Republican South Carolina Governor Mark Sanford is considering a presidential run against Trump on a fiscally conservative platform. Sanford told the Daily Caller last week that he’s been unnerved by the spending policies of the Trump administration and many Republicans in congress. (RELATED: Trillion Dollar Budget Deal Funds Planned Parenthood Yet Again)

“It’s as real as a hurricane coming off the coast of South Carolina,” Sanford said of the looming debt crisis.

But, conservatives have not given up hope and are still trying to persuade the president to veto the budget if it passes the Senate as expected.

Leading House conservatives authored a letter to Trump earlier this week imploring him to veto the deal, according to Politico.

“You should veto this bill because it is fiscally irresponsible,” the members wrote. “It blows well beyond what was intended with the 2011 [Budget Control Act] caps. Furthermore, it continues spending hundreds of billions more than what we take in a year and does not put our nation on a path towards a balanced budget.”

Will unrelenting conservative backlash lead to a change of heart for Trump? Or, will the president play it safe and take his losses?

The answer to that question could determine whether or not Trump gets a second term.