Democratic presidential candidates unveiled a new line of defense against criticisms of their sweeping policy proposals during this week’s CNN debates.

The candidates swept aside any questions about the potential cost or relative lack of realism of their plans by crying that the debate moderators or their opponents were unfairly using “Republican talking points.”

The phrase was uttered by Vermont Sen. Bernie Sanders, California Sen. Kamala Harris, New Jersey Sen. Cory Booker, and former Department of Housing and Urban Development (HUD) Secretary Julian Castro during the two night debate, each time to avoid defending their radical policies or to accuse their opponents of not being progressive enough.

“What I am talking about and others up here are talking about is no deductibles and no co-payments and Jake, your question is a Republican talking point,” Sanders asserted.

Sanders has openly admitted in the past that he will have to raise taxes on the middle class to pay for his approximately $30 trillion health care plan, which he also says will cover illegal immigrants.

Other candidates used Sanders’ tactic during the second night of the debate, apparently viewing it as an effective means to squirm out of answering any difficult questions about their proposals.

Colorado Sen. Michael Bennet suggested Wednesday that Sen. Harris was being dishonest by claiming that her own health care plan would not eliminate employer-based private insurance, stating, “We need to be honest about what’s in this plan. It bans employer-based insurance and taxes the middle class to the tune of $30 trillion.”

Harris immediately replied, “He — we cannot keep with the Republican talking points on this.  You got to stop … under my Medicare-for-all plan, yes, employers are not going to be able to dictate the kind of health care that their employees get.”

While Harris’ plan technically allows private insurers to continue to operate — unlike Sanders’ plan — those companies have to adhere to her strict Medicare-level standards in order to be allowed to even offer plans to consumers. 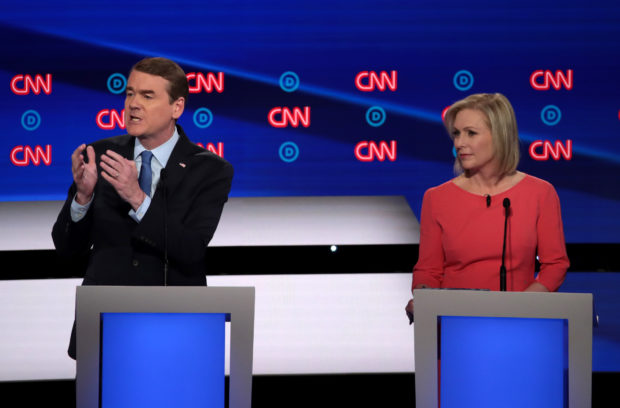 He added that Sanders admits that his Medicare-for-all plan will cost trillions of dollars and require tax increases, declaring, “[Sanders] says that.  Republicans don’t say it. Don’t try to distract from the truth.”

Former Vice President Joe Biden similarly tried to push back on allegations that questions about the cost of his opponents’ health care plans are out of bounds, and defended his own plan to expand on Obamacare rather than switch to a single-payer system.

“This is not a Republican talking point,” he said, noting, “the Republicans are trying to kill Obamacare.”

But Bennet and Biden’s protests did little to quell the defense of the night, as the candidates slipped it in again during debates on immigration.

Booker claimed, for example, that describing Democratic immigration policy as essentially open borders is a talking point that Republicans use in order to divide the Democratic Party. He used a similar attack on Biden for suggesting that the United States should prioritize highly-skilled immigrants who can contribute to the economy. (RELATED: Democrats Push Immigration Policies That Amount To Open Borders In Second Debate)

“We are playing into Republican hands who have a very different view, and they’re trying to divide us against each other.  I’m listening to the language of my colleagues.  No, Mr. Vice President, we are not going to just let people cross the border,” Booker said in response to Biden arguing that immigrants have to “get in line.” “That’s playing into what the Republicans want, to pit some immigrants against other immigrants.”

“Open borders is a right-wing talking point, and frankly I’m disappointed that some folks, including some folks on this stage, have taken the bait,” Castro said, declining to explain why refusing to detain illegal immigrants is not a de facto open borders policy.

The Democrats’ reliance on the “Republican talking points” defense sent a signal that any criticism to the right of their very far-left plans was tantamount to standing with the opposition. It leaves very little room for any moderates to continue to operate in good faith in the Democratic Party.