President Donald Trump’s former communications director Anthony Scaramucci said Friday that Twitter locked him out of his account for calling the president fat.

“I think it is related to ‘fat shaming’ President Trump,” Scaramucci told Axios’s Jonathan Swan Friday morning. “I should have said he is the largest proportioned President since William Howard Taft. My bad.” Trump’s former communications director, who stayed on the job for less than one month, has become a critic of the president.

. @Scaramucci says Twitter has temporarily suspended his account. “I think it is related to ‘fat shaming’ President Trump,” the president’s former communications director says. “I should have said he is the largest proportioned President since William Howard Taft. My bad.” pic.twitter.com/0nnH9rtjxg

Scaramucci told his Twitter followers Thursday night that the president is “the fattest President since William Howard Taft . . .” 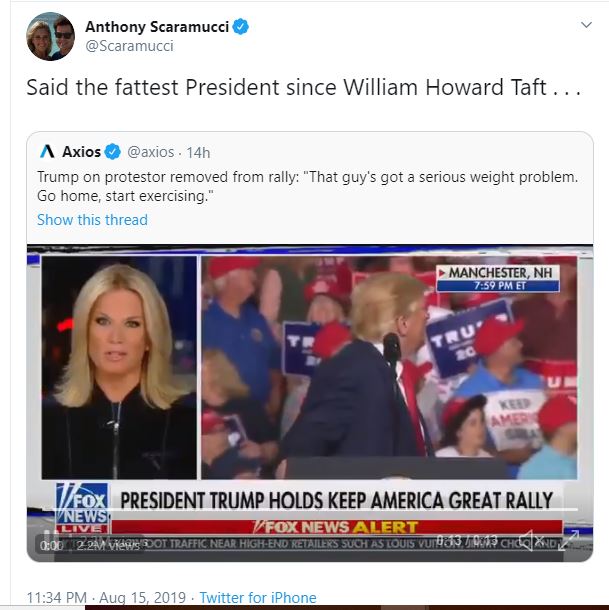 Scaramucci included in his tweet a link to a new story covering comments the president said about a protester at a Thursday night rally in New Hampshire.

Trump and Scaramucci began slinging insults at each other recently as their relationship deteriorated since the latter left the administration in 2017. (RELATED: Scaramucci, Trump Have A Falling-Out As POTUS Dings Him For Being A Television Expert)

“Anthony Scaramucci, who was quickly terminated (11 days) from a position that he was totally incapable of handling, now seems to do nothing but television as the all time expert on ‘President Trump.’ Like many other so-called television experts, he knows very little about me…..” the president said in an Aug. 11 tweet.

Scaramucci, who the media nicknamed “Mooch,” replied with a tweet suggesting the president intends on turning on the country.

“For the last 3 years I have fully supported this President. Recently he has said things that divide the country in a way that is unacceptable. So I didn’t pass the 100% litmus test. Eventually he turns on everyone and soon it will be you and then the entire country,” he said.

Scaramucci enjoyed a short 2017 tenure as White House communications director from July 21 to 31, which broke records for its shortness and made him a punchline. His departure came at the request of former chief of staff John Kelly, who made his presence known before resigning in December 2018.

The Wall Street financier’s ouster from the administration came shortly after he made some lurid remarks to The New Yorker in July of that year, telling the publication’s former Washington correspondent Ryan Lizza that he was not interested in getting media attention.

“I’m not Steve Bannon, I’m not trying to suck my own cock,” Scaramucci told Lizza at the time, speaking of Trump’s former chief strategist, Steve Bannon. Scaramucci is a mainstay on cable news channels, where he frequently criticizes Trump for his positions on race and his handling of the Aug. 3 mass shooting in El Paso, Texas.