Five people are dead and at least 21 others are injured after a shooting Saturday in Odessa, Texas, according to police.

Officers responded to reports of multiple gunshot victims and an active shooter in the Odessa-Midland area. The Midland Police Department said there might be two shooters driving separate vehicles, according to its Facebook post.

At least twenty-one people have been shot, two of whom are police officers, Midland Mayor Jerry Morales said, according to CNN. Five people have died, CNBC reported.

One of the shooters was killed by police at the Cinergy in Odessa, David Begnaud, a CBS correspondent, reported.

“There is no active shooter at this time,” the Midland Police Department said in a statement, Begnaud reported. “All agencies are investigating reports of possible suspects.”

It is unclear if there is still a second suspect on the loose. 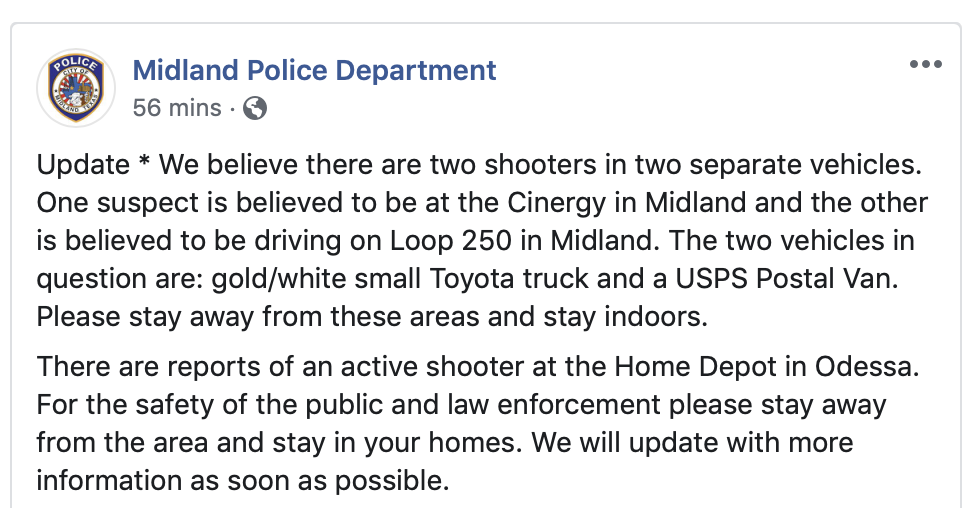 “A subject (possibly 2) is currently driving around Odessa shooting at random people. At this time there are multiple gunshot victims,” the Odessa Police Department wrote on its Facebook page. “The suspect just hijacked a U.S. mail carrier truck and was last seen in the area of 38th and Walnut.”

The victims were shot in Midland and Odessa, according to Begnaud. President Donald Trump was briefed on the situation. (RELATED: Journalists Are Throwing ‘Hissy Fits’ At Factual Reporting Of Dayton Shooter’s Politics)

President Trump has been briefed on the shooting situation in Texas, and the White House is monitoring the situation, Press Sec. Grisham says.

A manhunt was underway for the suspected shooters and officers requested that the public avoid roadways. The suspects were shooting at random people, according to police.

Republican Texas Gov. Greg Abbott called the shootings “senseless and cowardly,” according to a statement.

“The First Lady and I are heartbroken over this senseless and cowardly attack, and we offer our unwavering support to the victims, their families, and all the people of Midland and Odessa,” Abbott said. “We will unite, as Texans always do, to respond to this tragedy.”