Facebook removed a false label on an editorial that expresses skepticism about the effectiveness of climate models after the scientists who authored the piece said the company relied on partisan activists to fact check their op-ed.

A Facebook spokeswoman confirmed on background the company removed the label. The decision comes shortly after scientists Caleb Rossiter and Patrick Michaels argued their point in a Sept. 10 letter to CEO Mark Zuckerberg. They said in the letter that Facebook used a partisan fact-check group to defame them.

“These actions by Facebook constitute censorship of science and defamation of our scholarship,” the academics said in the letter, which the Daily Caller News Foundation obtained. “They appear to us to contradict Facebook’s stated role as a non-partisan site for the ex- change of opinion and information.”

Rossiter is a climate statistician and the executive director for CO2 Coalition, a Virginia-based group of 50 climate scientists who use research to explain why they believe people should not be alarmed by the rise in carbon dioxide. Michaels, meanwhile, is a climatologist and one of the group’s senior fellows.

They also argued Facebook’s reliance on a group called Climate Feedback to review the credibility of information they used in an Aug. 25 editorial at the Washington Examiner is a cudgel against free speech. Facebook used the group’s review to label Rossiter and Michaels’s points false.

The Washington Examiner is considering its own response to the fact check, Hugo Gurdon, the editor-in-chief at the paper, told the DCNF in an email. The DCNF has independently confirmed Facebook removed the label, though the big tech company has not yet explained why the false label was removed.

Rossiter and Michaels want an explanation in the meantime. 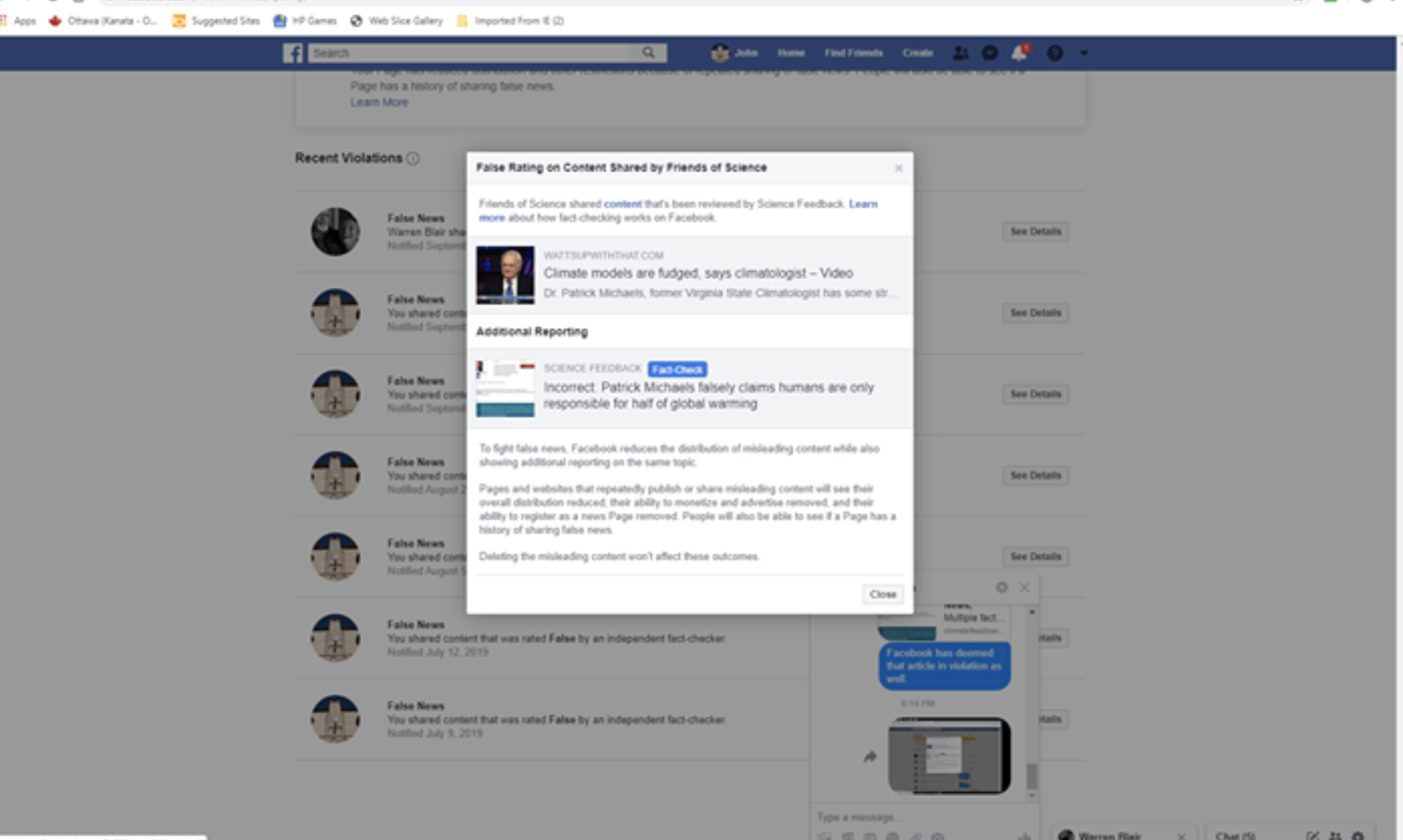 Pictured is a Facebook bcreenshot of a fact check of a Washington Examiner editorial by Patrick Michaels and Caleb Rossiter. 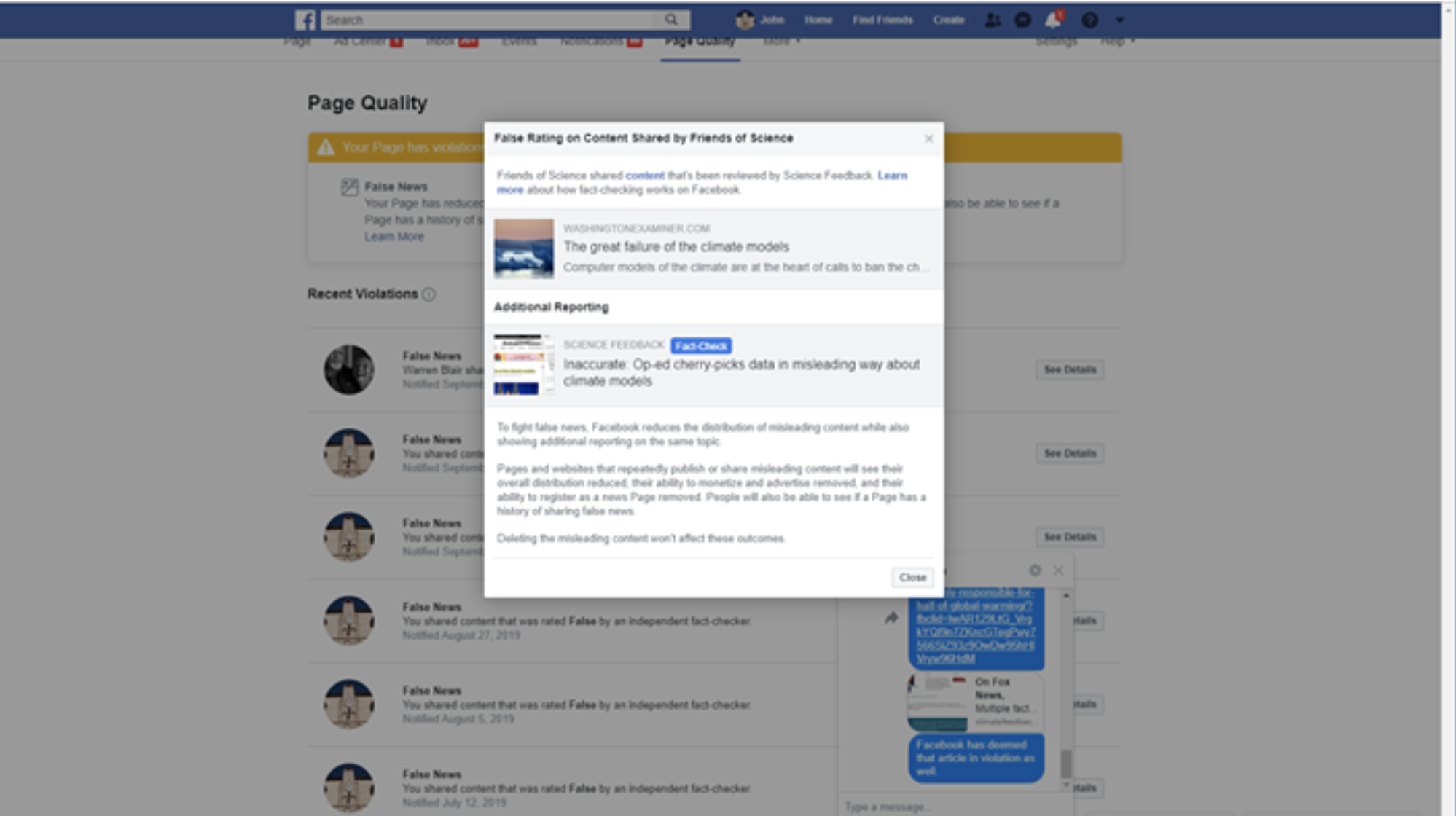 Pictured is a Facebook screenshot of a fact check of a Washington Examiner editorial by Patrick Michaels and Caleb Rossiter.

Climate Feedback’s review is “replete with errors and simple differences of opinion,” they argued in the letter to Zuckerberg. The editorial suggested a variety of serious issues in choice of climate data sets often lead researchers to believe global temperatures are rising more than is observed.

Rossiter and Michaels cited data from the National Oceanic and Atmospheric Administration among others to make their points. The information was not sufficient for Climate Feedback’s reviewers, who said in their Aug. 31 review that the duo used cherry-picked data and biased information to support their positions.

Rossiter and Michaels said Climate Feedback itself is a hyper-partisan entity.

They argued the group is funded by Eric Michelman, a wealthy climate activist who said in an interview in 2015 for Yes! Magazine that the science surrounding climate change is settled. He also said at the time that the time for debate is over.

Climate Feedback works in partnership with the International Fact-Checking Network (IFCN), which Facebook relies on for credible fact checks. Groups the IFCN partners with must abide by a strict set of principles to maintain the partnership, with one of the principles being a promise to be non-partisan.

The Washington Examiner challenged Climate Feedback’s assessment, but the website refused to back down, Jennifer Yingling, a representative for the paper’s publisher, told the DCNF in an email thread.

“This is a regurgitation from and by the ‘fact checking’ body. Facebook has clearly outsourced not just the ‘fact checking’ but the appeals process to this alarmist advocacy group,” Rossiter told the DCNF, referring to feedback the website provided him and Michaels when the Washington Examiner requested a review of the fact check.

Michaels made similar comments. “I think Facebook is on a slippery slope on whether it can intrude on science issues where there is significant disagreement such as what happened here. Any fact checker can cite the data we cited and find that they are legit and highly respected,” he said in an interview with the DCNF. The reviewers disagreed.

Michaels and Rossiter’s claims are not credible, according to Andrew Dessler, a climatologist and professor at Texas A&M University, and one of the academics responsible for the review of the Washington Examiner piece.

“I judge their response to be ‘false’. It contains factual errors as well as lazy, bad science,” Dessler told the DCNF, citing comments from environmental economist Zeke Hausfather who said in a Sept. 5 Twitter thread that there hasn’t been a 14-year pause in global warming. Dessler maintains that Rossiter and Michaels are wrong — there is no problem with climate models.

The other researchers involved in the fact check did not provide a statement, nor did Climate Feedback.

Michelman has not responded to the DCNF’s request for comment through More Than Scientists, a group he founded in 2006.

This is not the first time Facebook has gotten criticized over its fact-checking process. (RELATED: Sen Hawley Says Zuckerberg Told Him There ‘Was Clearly Bias’ In The LiveAction Fact Check)

The tech company was criticised after an Aug. 30 fact check, published in Health Feedback, targeted an Aug. 9 video from anti-abortion group Live Action that included the statement “abortion is never medically necessary.”

Dr. Jennifer Gunter is listed in an updated version of the fact check’s read more section.

Gunter, who authored a book called “The Vagina Bible,” has openly criticized Live Action and its founder Lila Rose on Twitter, calling Rose on Aug. 31 “a forced birther who knows nothing about medical care.” Zuckerberg acknowledged in September to Missouri Sen. Josh Hawley, a Republican, that the fact check of Live Action was done in a biased way.