In a July 25 phone call, Trump asked Ukrainian president Volodymyr Zelensky to look into potential wrongdoing involving Biden’s threat during the Obama administration to withhold $1 billion in loan guarantees if Ukraine did not fire a top prosecutor. The prosecutor at the time was investigating Burisma Holdings, an oil company that employed Biden’s son, Hunter.

“President Trump’s July 25 phone call with Ukrainian President Volodymyr Zelensky was beautiful. Except for the part where Trump talked about former Vice President Joe Biden’s son Hunter. That was inappropriate,” Fleischer argued. “But what’s even more inappropriate is the hysterical, hyperbolic, hypocritical, fabricated (I’m talking to you, Katy Tur) impeachment-seeking reaction to the call.” 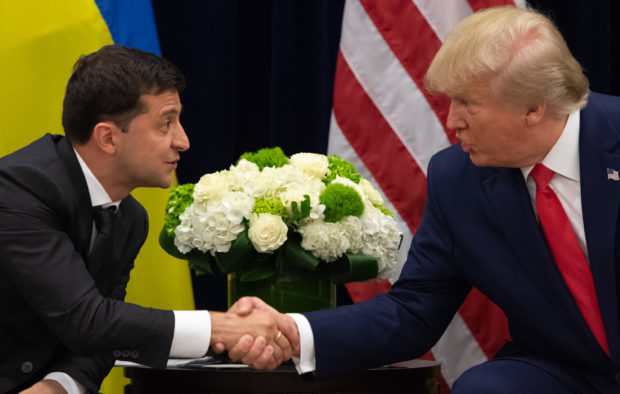 TOPSHOT – US President Donald Trump and Ukrainian President Volodymyr Zelensky shake hands during a meeting in New York on September 25, 2019, on the sidelines of the United Nations General Assembly. (Photo by SAUL LOEB/AFP/Getty Images)

Fleischer added, “In football terms, President Trump deserved a five-yard penalty flag. What he did was the equivalent of a false start.”

Democrats have since opened a “formal impeachment inquiry” at the behest of Speaker Nancy Pelosi, alleging that Trump used the authority of his office for personal gain and engaged in a quid pro quo arrangement with a foreign government. Democrats note that Trump froze hundreds of millions in military aid to Ukraine prior to the phone call, however, the Ukrainian government reportedly didn’t even know about the withholding until a month after the call.

“[Impeachment] is grossly disproportionate and highly hypocritical,” Fleischer argued. “Republicans need to wise up. The overreacting Democrats and their media backers are the real threat to civility, norms and fairness.”

The former press secretary also pointed out that many Democrats have pressured Ukraine into investigations in the past, particularly Sens. Robert Menendez of New Jersey, Richard Durbin of Illinois and Patrick Leahy of Vermont, who wrote a letter demanding the country continue cooperating with the Mueller probe into Trump or risk U.S. support. (RELATED: Democrats Had No Problem Asking Ukraine To Investigate Political Opponents When Trump Was The Target)

Fleischer wrote, “Democrats want us to believe it’s OK when Democratic senators call on Ukrainians to investigate their rival, but it’s not OK if Trump does. Even by Washington’s typical standards, the Democratic-media hypocrisy toward Trump is over the top.”