Catholic bishops have a history of telling politicians who support abortion, like Democratic presidential candidate Joe Biden, that they should not receive communion at Catholic masses.

A Catholic priest denied communion to Biden in South Carolina on Sunday, a move that prompted Biden to defend himself Tuesday, saying, “I am a practicing Catholic, I practice my faith.” This is not the first time Biden has been censured for his abortion stances and prevented from receiving communion. Bishop Joseph Francis Martino of Biden’s hometown of Scranton, Pennsylvania, told the pro-abortion former vice president in 2008 he could not receive communion.

The practice of refusing communion to pro-abortion politicians is not an uncommon one. Many politicians who profess themselves to be Catholic, such as former presidential candidate John Kerry, House Speaker Nancy Pelosi, and former New York Mayor Rudy Giuliani have all expressed public support of abortion and been told by Catholic bishops not to receive communion for this.

Abortion surfaced as a conflicting issue for Catholic politicians after the Supreme Court passed Roe v. Wade in 1973, pronouncing a constitutional right to abortion. About 10 years later at a 1984 press conference, New York Archbishop John Joseph O’Connor spoke out against pro-abortion politicians.

“I do not see how a Catholic, in good conscience, can vote for an individual expressing himself or herself as favoring abortion,” he said.

Then-New York Gov. Mario Cuomo responded to the remarks by criticizing the archbishop for correlating politics and religion. (RELATED: The Clintons Coined The Phrase ‘Safe, Legal And Rare,’ But Abortion Activists Say This Is Stigmatizing)

“So I’m a Catholic governor,” Cuomo said. “I’m going to make you all Catholics — no birth control, you have to go to church on Sunday, no abortion.”

As he delivered a 1984 speech at the University of Notre Dame later that year, Cuomo added, “I accept the church’s teaching on abortion. Must I insist you do?”

Though Dolan said on Fox News that excommunicating Andrew Cuomo from the Catholic Church for this move was “not the appropriate response,” he also said Cuomo “likes being the … bad boy when it comes to the Catholic Church,” according to the New York Post.

Killea, though she said she was personally opposed to abortion, said she would not oppose a woman’s decision to obtain one.  Maher told Killea that she could no longer receive communion because her abortion stances were ”a grave scandal against the Church.”

The bishop also issued a statement at the time, saying, ”to be publicly endorsing and privately opposed to abortion is an evil charade.” 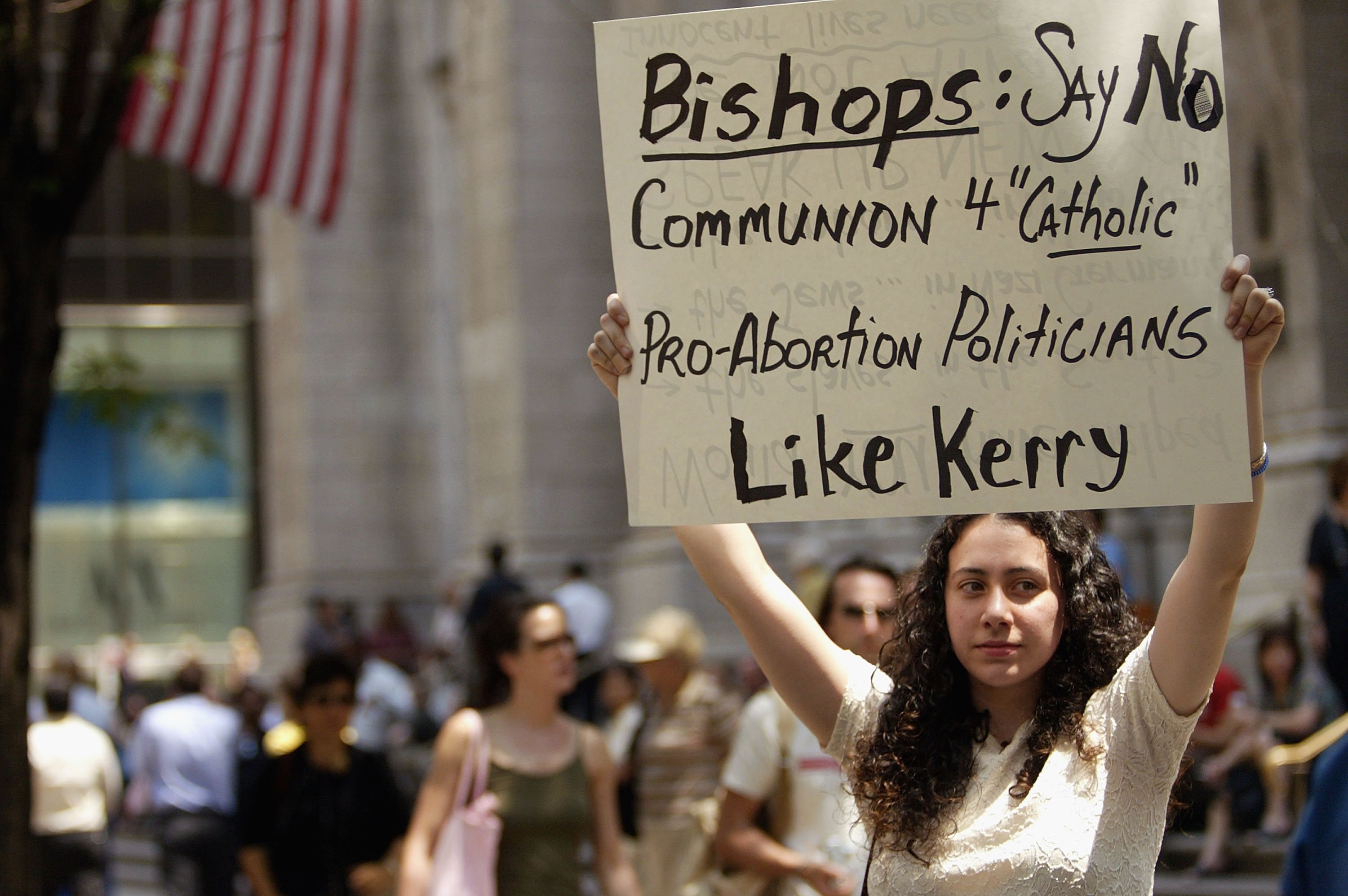 Cardinal Raymond Burke called for both Kerry and Pelosi to be prohibited from receiving communion due to their stances on abortion. As the former Archbishop of St. Louis, Burke warned presidential candidate Kerry before the Missouri primary in February 2004 that Burke would not give him communion.

Burke added that under no circumstances should Pelosi should be given communion until she changed her abortion stances. He also said in 2007 that he would not give communion to former New York Mayor Rudy Giuliani or any other candidate who supports abortion rights.

Nigerian Cardinal Francis Arinze spoke out after Planned Parenthood endorsed Kerry for president in 2004, saying a Roman Catholic politician who supports abortion “is not fit” to receive communion.

Arinze did not specifically name Kerry, but his statement came mere hours after Kerry said, “‘Abortion should be rare, but it should be safe and legal, and the government should stay out of the bedrooms. We are going to have a change in leadership in this country to protect the right of choice.”

”Objectively, the answer is clear,” Arinze said, when questioned as to whether Catholic politicians who support abortion should receive communion. “The person is not fit” to do so. If they should not receive, then they should not be given.”

Boston Archbishop Sean P. O’Malley warned at the time that politicians who oppose church teaching “shouldn’t dare come to communion,” though he did not explicitly say Kerry could not receive communion.

Forbidding politicians who support abortion from receiving communion “makes perfect sense,” Burke said in a 2013 interview with EWTN, according to the Global Dispatch. The cardinal warned that priests must protect the Holy Eucharist from “being profaned, being violated by someone receiving unworthily,” or someone “who knows that he or she is unworthy and yet presumes to come forward and to take the Holy Eucharist.”

Burke was later demoted to a “largely ceremonial” role by Pope Francis in 2014 as patron of the charity, the Sovereign Military Order of Malta.

“One gets the impression, or it’s interpreted this way in the media, that he thinks we’re talking too much about abortion, too much about the integrity of marriage as between one man and one woman,” Burke said at the time. “But we can never talk enough about that.”

Conversely, Cardinal Theodore McCarrick discouraged preventing Catholic politicians from receiving communion. His comments on the matter prompted then-Cardinal Ratzinger, who would become Pope Benedict XVI, to cite the Catholic Church’s Canon Law, number 915, saying that those “obstinately persevering in manifest grave sin are not to be admitted to holy communion.”

McCarrick has since been found to have used his status, his contacts, flattery and familial language to make young seminarians and young men feel special before allegedly harassing or sexually abusing them. He was defrocked in disgrace.

Father Thomas Petri similarly cited Canon 915 when he banned former presidential candidate Hillary Clinton’s pick for vice president Tim Kaine from receiving communion in his parish, saying in a 2016 tweet, “Do us both a favor. Don’t show up in my communion line. I take Canon 915 seriously. It’d be embarrassing for you & for me.”

The active politicians mentioned in this article did not immediately respond to the Daily Caller News Foundation’s request for comment.