During Tuesday’s “Hot Topics,” Meghan McCain, one of two right-leaning hosts of ABC’s “The View,” burst forth with apologies for not being able to celebrate Whoopi Goldberg‘s  birthday, which is Wednesday.

“This is my last show… just for this week,” McCain explained, after segueing from admitting that the oral sex discussed in former President Bill Clinton‘s impeachment hearings is seared into her brain forever. Which was odd, since she said her parents forbade her from watching PBS. So maybe she watched right up until the part with the cigar?

Maybe she should be. Last month, the ladies celebrated McCain’s birthday by delivering a special video message from former House Speaker Paul Ryan, who Meghan refers to as her “boyfriend.”

The ladies didn’t seem too broken up about McCain’s impending absence, but they did utter the obligatory “we’ll miss you’s.” Actually, not all of them said it. Whoopi said she’ll have another birthday.

In other words, no biggie, Meghan. Relax.

“I have not been fired or abducted by aliens,” McCain continued, dressed in leopard-printed leggings and a leopard blazer. (It sounds like I’m mocking her fashion, but I’m not. The ensemble was cute.) (RELATED: Meghan McCain Says Hunter Biden Should’ve Put On A Suit For His TV Interview)

She has been known to don unusual headwear. She also doesn’t enjoy being booed by the audience. (RELATED: The Duchess Of Sedona Goes On TV In A Bejeweled Tiara) 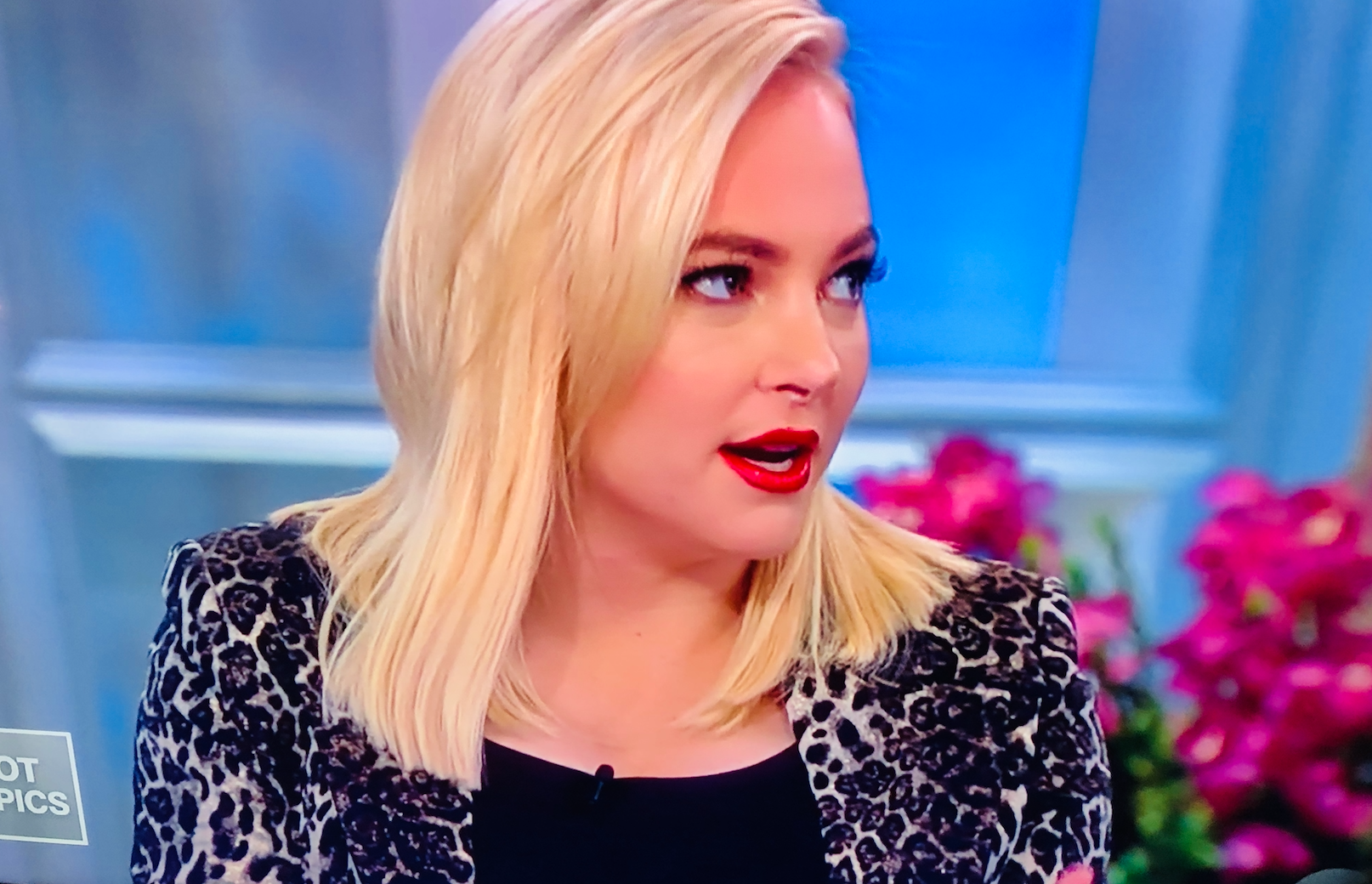 But even Google doesn’t indicate that McCain has ever been reported as being abducted by an alien.

The co-host explained that she will be doing something that has become an annual event for her — attending the Magnitsky awards. She ordered viewers to Google it.

“I do it every year now,” McCain explained to her sometimes on-air nemesis Joy Behar, who also didn’t seem too crushed by the news. “Thank you to ABC for letting me do that. I’m very, very sorry.”

(If any company needs an on-air ass smooch this week it’s ABC. As recently revealed by anchor Amy Robach, the network covered up the Jeffrey Epstein story for three years, saying it did not meet their standards. ABC then got the alleged leaker fired from CBS, despite the young woman insisting it was not her and Project Veritas‘s James O’Keefe reporting that the leaker is still inside the ranks of ABC.)

How sorry can McCain be? She gets to travel to a secret spot in the heart of London for a ceremony celebrating the bravery of Sergei Magnitsky, a Russian lawyer who died in 2009 after blowing the whistle on fraud by the Russian state. The awards are doled annually out to those who have fought back against Russian atrocities. Congress passed the Magnitsky Act in 2012. The law enables the U.S. to freeze the visas and assets of Russian officials who have violated human rights.

The late Sen. John McCain (R-Ariz.) was posthumously honored in 2018. McCain was there to receive his award. (RELATED: McCain Verbally Smacks Trump For Tweet Involving Her Father)

But more importantly, McCain will miss her coworker’s blandly-aged birthday.

It’s not a milestone.

“It really bothers me that conspiracy happens to all of us,” she said, directing her attention to Sunny Hostin.

Hostin was then forced to explain that when she was tending to her son at college, some viewers accused her of not wanting to be on “The View” with a certain guest.

“Where are you Sunny? Are you afraid of the guest that’s there?,” Hostin said, imitating her conspiracy critic in a high-pitched voice.

Until we hear otherwise, Meghan McCain has NOT been abducted by aliens.

Oh and Happy Birthday Whoopi! Hope you survive the big day without Meghan.