Erdogan showed the video to a group of Republican congressmen including South Carolina Sen. Lindsey Graham, Texas Sen. Ted Cruz and Iowa Sen. Joni Ernst during his Oval Office meeting with President Donald Trump, according to The Hill.

“He showed a video about the history of [Kurdish] terrorist attacks … and what I told him is: I’m not here to retry the past. I acknowledge that you have a legitimate national security concern. … Do you want me to get the Kurds to play a video about what your forces have done? So I was very firm,” Graham said, The Hill reported.

“Well, always you want to watch, and of course, the information was presented — it is very heartbreaking. But, bottom line: You have no idea who produced the film, where it’s from, what group of people it is,” Ernst said. “So while I appreciate President Erdogan showing us the information, we don’t know the origins, we don’t know — and it was very much a propaganda video.”

The Turkish president apparently pulled out his iPad and showed the room a Turkish propaganda video depicting U.S.-allied Kurdish fighters as terrorists, Axios reported. A GOP source familiar with the incident told CNN the video was “surreal.”

NEW from @jonathanvswan: An Oval Office meeting yesterday with Turkey’s Recep Tayyip Erdoğan took a dark turn when he pulled out his iPad and made President Trump and a group of GOP senators watch a propaganda video that depicted Kurds as terrorists. https://t.co/5SFkacGn3v

An administration official said Trump invited the Republican senators in a display of opposition to Erdogan because they have been critical of the Turkish president’s S-400 Russian missile air defense system, CNN reported.

“To the extent that Erdogan understands now the leverage and strength that the Senate has on this … that was helpful,” the official said, according to CNN. (RELATED: Anti-Erdogan Protesters Gather Outside White House As Trump Hosts Turkish President)

Graham, a frequent supporter of Trump’s policies, was critical of the president when he announced his decision to withdraw the remaining U.S. troops from northern Syria, leaving Kurdish fighters to defend their territory without American assistance.

“Pray for our Kurdish allies who have been shamelessly abandoned by the Trump Administration. This move ensures the reemergence of ISIS. … I urge President Trump to change course while there is still time by going back to the safe zone concept that was working,” the South Carolina senator wrote in an Oct. 9 tweet thread.

Erdogan said during a Wednesday press conference after his Oval Office meeting with Trump that Turkey’s “Operation Peace Spring” — an air and ground strike launched against the Kurds after Trump withdrew U.S. troops — was a “step forward in fighting terrorism in a very resolute fashion.” 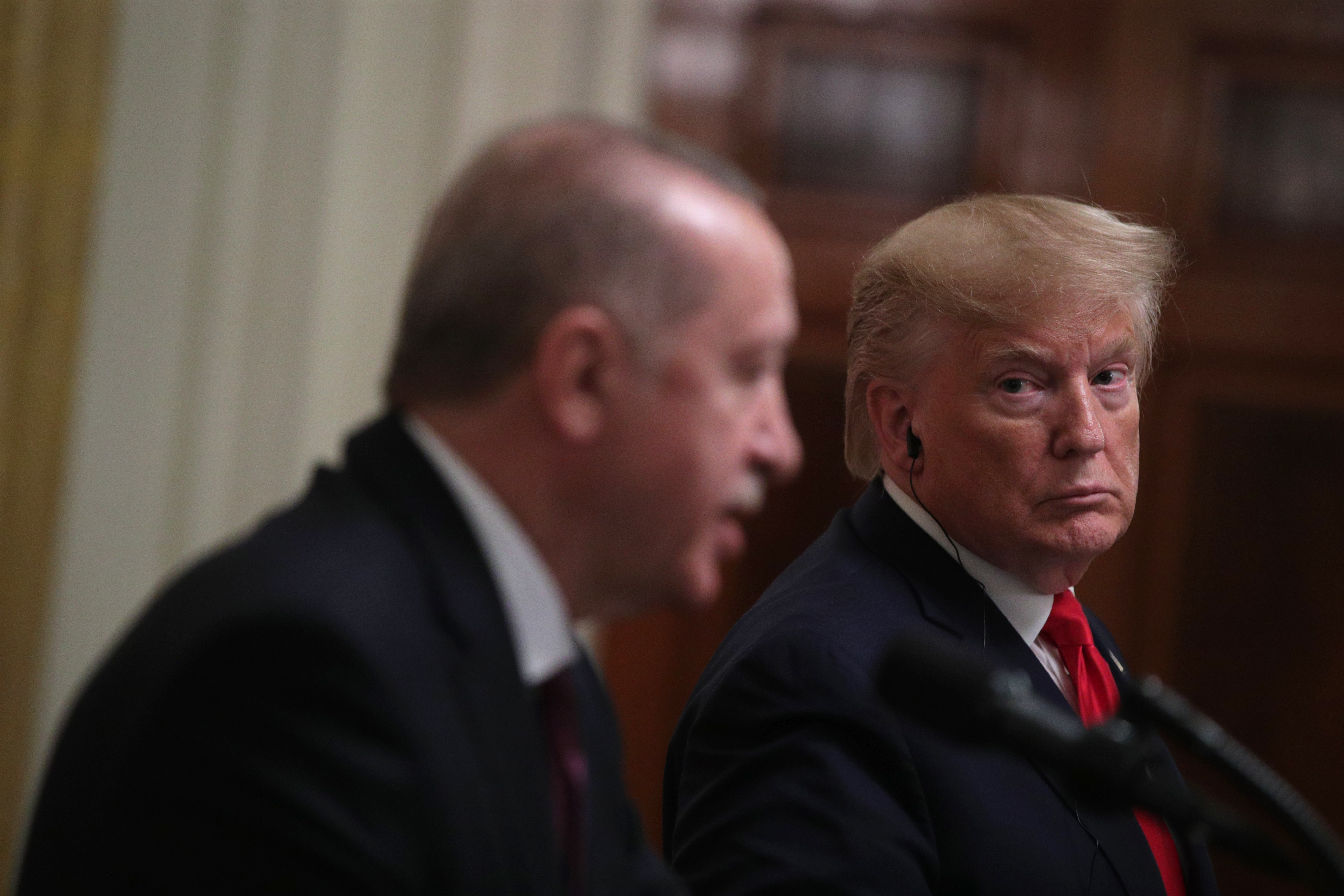 U.S. President Donald Trump listens as Turkish President Recep Tayyip Erdogan answers a question during a press conference in the East Room of the White House on November 13, 2019 in Washington, DC. (Photo by Alex Wong/Getty Images)

“In order to further strengthen our cooperation with Syria, we believe that we’ve gained significant momentum with our Oct. 17 agreement. But they are attacking our soldiers and [civilians] in a very provocative fashion,” the Turkish president added.

“In the last 24 hours, more than 19 attacks [have taken] place. At the beginning of this month … an explosive device was placed in an outdoor market. As a result of the explosion, 13 civilian lives were lost,” he continued in reference to a car bomb that killed 13 people in northern Syria on Nov. 2, which officials from both countries blamed on each other, according to The Associated Press.

Erdogan added that despite the events, Turkey is still committed to its ceasefire agreement with the U.S., but “some circles” have been unsympathetic toward Turkey and are clouding “the understanding of the public opinion.”