An apparent leaked email claims that a United Nations (UN) report about an alleged chlorine gas attack that led to missile strikes against Syria in April 2018 was modified in a way that misrepresented the facts.

Reports and dramatic footage of bodies and children foaming at the mouth led to widespread condemnation and eventually massive strikes from the U.S., the United Kingdom, and France against Syrian President Bashar al-Assad’s forces.

The protest email is allegedly from a dissenting Organization for the Prohibition of Chemicals Weapons (OPCW) scientist who worked on the original investigation. Published Saturday by Wikileaks, the email accuses the poison gas watchdog of censoring its report to “misrepresent the facts” and introducing an “unintended bias.”

“After reading this modified report, which incidentally no other team member who deployed into Douma has had the opportunity to do, I was struck by how much it misrepresents the facts,” the email read. “Many of the facts and observations outlined in the full version are inextricably interconnected and, by selectively omitting certain ones, an unintended bias has been introduced into the report, undermining its credibility. In other cases, some crucial facts that have remained in the redacted version have morphed into something quite different to what was initially drafted.”

RELEASE: Secret internal e-mail from OPCW whistleblower, a member of the fact-finding mission sent to Douma, Syria, after the alleged chemical attack in April last year, accusing OPCW management of doctoring report on the incident and distorting facts. https://t.co/ndK4sRikNk

The scientist says that investigations in Douma — the city where the chemical gas attacks allegedly occurred — produced no real evidence that the attack took place, yet those facts were left out of published OPCW reports. Further, in what it called a “major deviation from the original report,” the email contends that the non-redacted report included the possibility that cylinders found at the locations of the chemical attack may not have been the source of the alleged chemical release:

The redacted report states that the gas was likely released from the cylinders (in Locations 2 and 4). The original report purposely emphasised the fact that, although the cylinders might have been the source of the suspected chemical release, there was insufficient evidence to affirm this. It is possible the error was simply a typo. This is a major deviation from the original report.

The email contends that the Douma incident report may have left out key information, including that only tiny trace elements of chlorine, no more than would be found in household bleach, were found at the site. It also contended that symptoms displayed by alleged victims on video posted after the alleged chemical attack did not match what would have been produced by the chemicals found by investigators. 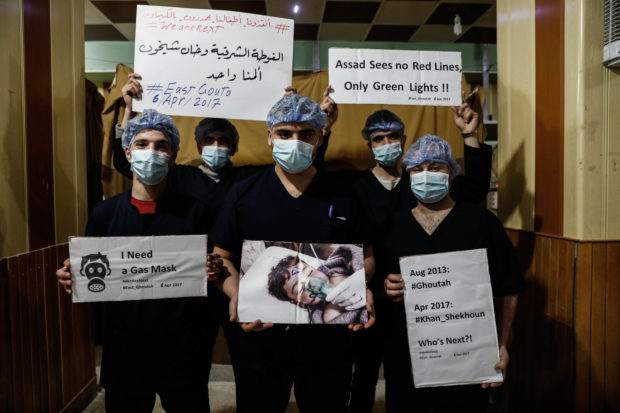 TOPSHOT – Medical staff at Damascus Countryside Specialised Hospital hold placards condemning a suspected chemical weapons attack on the Syrian town of Khan Sheikhun, during a gathering to show solidarity with the victims in the rebel-held Douma on the outskirts of Damascus on April 6, 2017. (AFP PHOTO / Sameer Al-Doumy (Photo credit should read SAMEER AL-DOUMY/AFP via Getty Images)

The email was originally sent June 22, 2018, around two weeks after the third interim report was published. The final report was released in March 2019. (RELATED: Tucker Warns Against Intervention In Syria)

Published in full at the bottom of this Daily Mail piece, the leaked email reportedly comes as dissenting scientists inside the OPCW have tried and failed for months to tell the truth about the issue.

“So in other words, America almost attacked a country and killed untold thousands of people over an attack that may never have happened in the first place, that powerful people may very well be lying about,” said Carlson.

The Fox News host then turned to former Guardian chief correspondent Jonathan Steele, who gave more details about the whistleblower’s role in the original investigation.

The OPCW director is standing by the report, according to CBS News:

“It is in the nature of any thorough inquiry for individuals in a team to express subjective views,” said OPCW Director General Fernando Arias during a Monday speech in The Hague. “While some of these diverse views continue to circulate in some public discussion forums, I would like to reiterate that I stand by the independent, professional conclusion.”