According to Quinnipiac, Sanders beats Trump 51-43 in a head-to-head competition, while other Democratic candidates like Joe Biden and Elizabeth Warren are also beating Trump, 51-42 and 50-43, respectively.

Moreover, even Democratic candidates with less support in the primary are beating Trump, such as South Bend Mayor Pete Buttigieg and Democratic Minnesota Sen. Amy Klobuchar.

The poll, which surveyed 1,553 self-identified registered voters and had a 2.5 percent margin of error, tracks with other poll results over the last two months that show Democrats beating Trump. 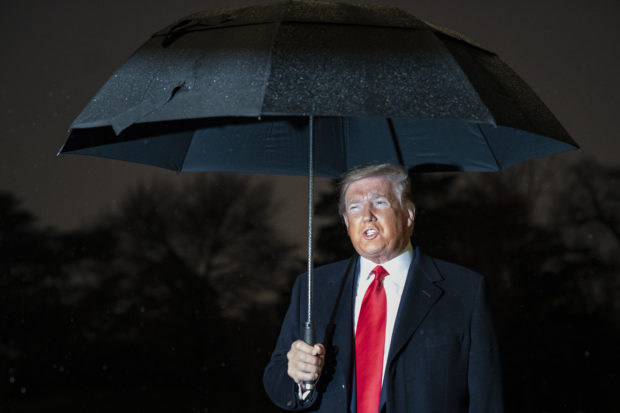 U.S. President Donald Trump holds an umbrella as he speaks to journalists before boarding Marine One on the South Lawn of the White House on December 10, 2019 in Washington, DC. Trump is headed to Hershey, Pennsylvania for a campaign rally. Photo by Drew Angerer/Getty Images

A November poll indicated that Democratic billionaire Michael Bloomberg was beating Trump, while another poll showed Biden and Sanders beating Trump too.

However, Quinnipiac poll from Tuesday does show a good sign for Trump on the issue of impeachment, with 51 percent of Americans opposing impeaching and removing Trump from office, and 45 percent supporting it. (RELATED: Fox News Polls Show 49% Of Americans Want Impeachment, Democrats Beating Trump In General Election)