The poll, conducted by Morning Consult, showed that in a hypothetical general election match up with Trump, Bloomberg polls at 43%, while Trump polls at 37%. 21% are undecided or don’t know.

Bloomberg’s numbers among Democrats in general are still low, however, with only 4% of Democrats calling him their first choice.

Bloomberg would best Trump by 6 points in a head-to-head contest, per new Politico/Morning Consult poll — more than the margin by which Biden and Sanders would beat Trump. pic.twitter.com/5kulSmD6S8 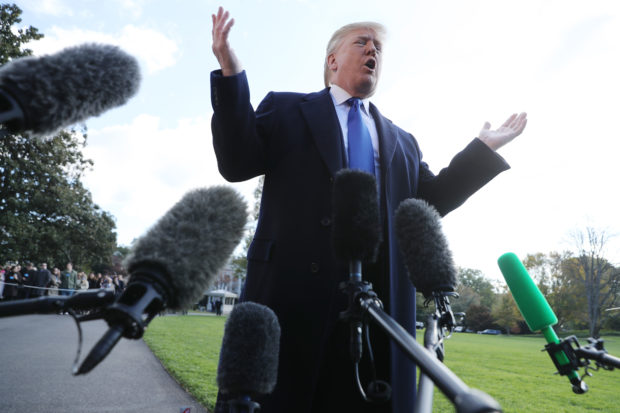 U.S. President Donald Trump talks to reporters before boarding Marine One and departing the White House November 08, 2019 in Washington, DC. Trump is traveling to Atlanta, Georgia, where he plans to kick off his Black Voices for Trump Coalition, an effort to attract more African-American voters. Photo by Chip Somodevilla/Getty Images

A poll from Fox News released this month showed that the leading Democratic candidates all beating Trump.

A Los Angeles Times poll also indicated that a majority of Americans will be unhappy if he wins reelection in 2020.