An armed church security guard who shot and killed the gunman who attacked a church in White Settlement, Texas on Sunday spoke out in a Sunday night Facebook post.

Jack Wilson, a candidate for Hood County commissioner who, according to his campaign’s Facebook page, owns a business called On Target Firearms Training Academy, Inc. and is a vocal supporter of President Donald Trump, was one of two armed volunteer security guards who took down the gunman. 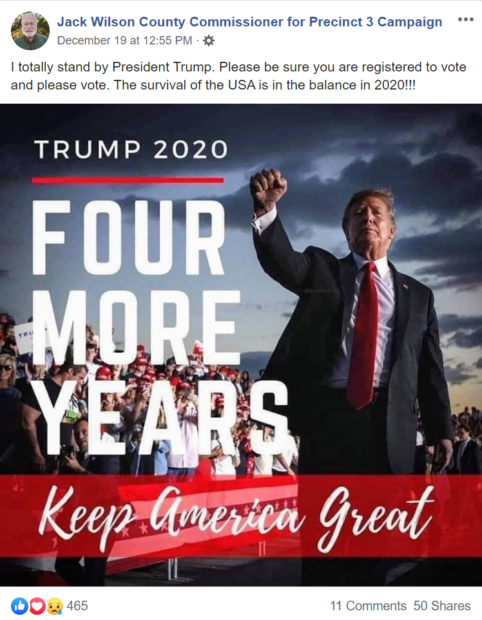 “I just want to thank all who have sent their prayers and comments on the events of today,” Wilson wrote on Facebook in a post that received thousands of likes and shares. “The events at West Freeway Church of Christ put me in a position that I would hope no one would have to be in, but evil exists and I had to take out an active shooter in church.”

“I’m thankful to GOD that I have been blessed with the ability and desire to serve him in the role of head of security at the church,” the post continued. “I am very sad in the loss of two dear friends and brothers in CHRIST, but evil does exist in this world and I and other members are not going to allow evil to succeed. Please pray for all the members and their families in this time. Thank you for your prayers and understanding.”

Wilson and the other West Freeway Church of Christ security team’s actions were praised as “heroic” by White Settlement Police Chief JP Bevering. The gunman managed to kill two congregants before being stopped by the armed parishioners, who responded within seconds. (RELATED: Beto O’Rourke Can’t Bring Himself To Thank Armed Churchgoers Who Stopped A Mass Shooting)

“The citizens who were inside that church undoubtedly saved 242 other parishioners, and that might get swept aside,” said Texas DPS Director Jeoff Williams. “It was miraculous. The true heroes in all this are the people who were sitting in those pews today and responded, the immediate responders … it was truly heroic.”

West Freeway Church of Christ Senior Minister Britt Farmer: “I’m thankful our government has allowed us the opportunity to protect ourselves” pic.twitter.com/5fLSnSjQzg

The church’s pastor, Senior Minister Britt Farmer, thanked the government for allowing “us the opportunity to protect ourselves.”