A National Association of Black Journalists (NABJ) chapter said a local newspaper was being unethical after it reported that a candidate for political office had a criminal record for climbing in a window, beating a man with a Bible, and choking him with a bike chain.

The Flint Journal found that of the 10 Democrats vying for state representative, three had criminal records, with one arrested in July 2019. It ran stories about those three cases Jan. 2.

The Flint NABJ president, Ebony Stith, issued a statement Jan. 3 saying the three criminals were all black and journalists have an ethical duty to “do no harm.” The articles should have talked about their “achievements,” she said.

“Our concerns arose from seeing three stories, all focused on African American males, emphasizing past arrests. The style of the articles gave the impression the arrests may have happened recently, but one occurred in 2001 and the most recent as in July 2019,” Stith said in the statement.

“I am glad I was able to talk with Flint Journal’s news leadership to open the dialogue on how we can better serve the Flint and Saginaw community in reporting stories that matter,” she said. (RELATED: Flint Councilman Berates Muslim Reporter: ‘Nasty Woman. Maybe It’s A Cultural Difference’)

Politics in Flint is dominated by the fallout of its infamous water crisis, which was precipitated in part after voters elected a mayor, Don Williamson, who had years earlier served prison time for financial fraud. Williamson, who was white, plunged the city into financial ruin, setting off a chain of events that culminated in lead-poisoned water.

The 10 Democrats vying for the state representative seat are running in an election that opened up after the incumbent, Sheldon Neeley, became Flint mayor. The criminal background stories were just one part of The Flint Journal’s broad coverage of the race. 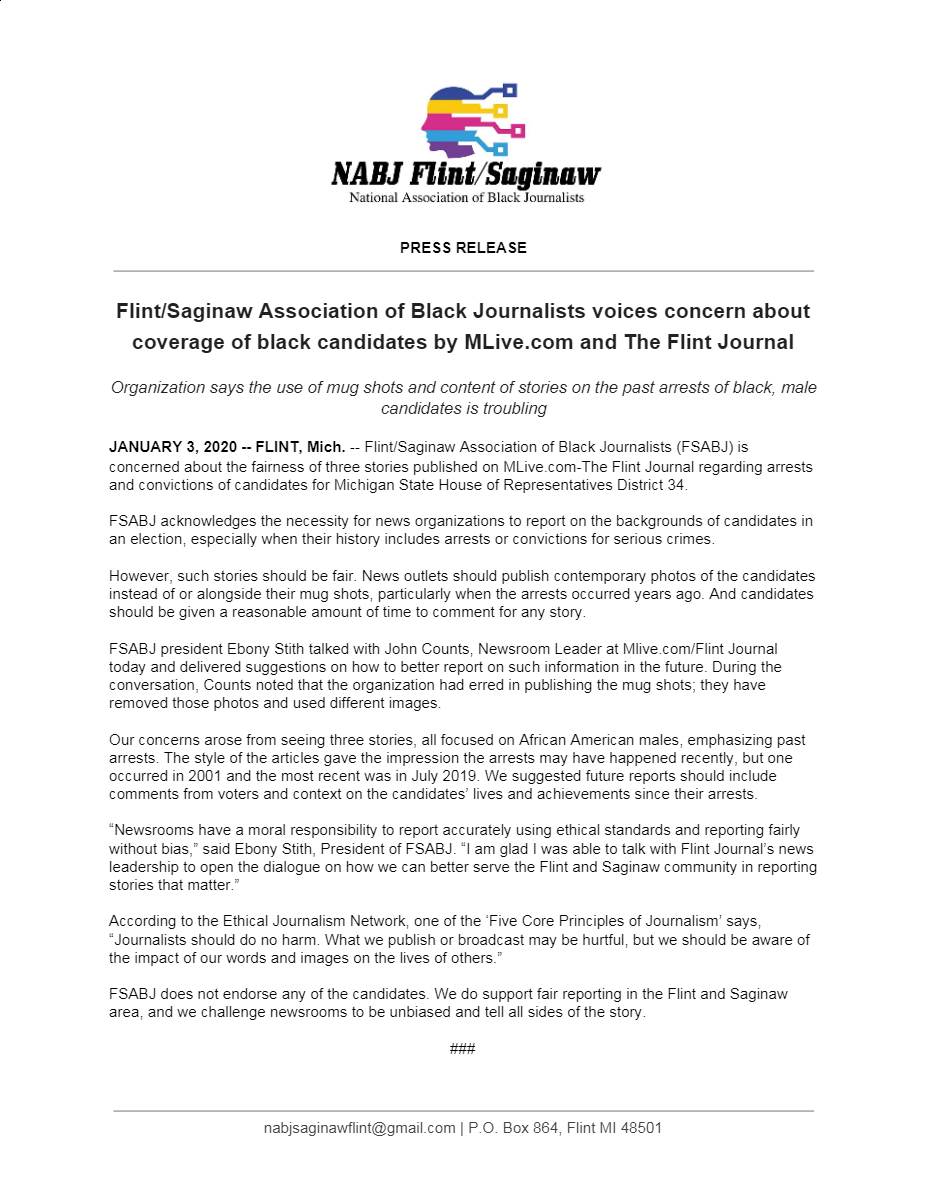 Flint Beat, another local publication, quoted Clark Hughes, an official with The Flint Journal’s corporate parent, saying Monday, “After hearing from the FSABJ, we agreed that we should also run the candidates’ campaign photos. We took the feedback to heart and made a change that we feel is in the best interests of the reader and of the candidates.” The media company declined to comment to the Daily Caller News Foundation.

Flint Beat quoted its own editor, Jiquanda Johnson, saying she hopes the coverage doesn’t “impact the Jan. 7 primary election.” She is a member of the black journalists group.

The national-level NABJ, whose president is Dorothy Tucker, did not respond to questions from the DCNF about whether it is racist to write standalone articles on the criminal backgrounds of those seeking higher office, or how it was racist considering nine of the 10 candidates running for the Democratic nomination Tuesday are black, and those without criminal records were not impacted.

In 2001, candidate Vincent Lang climbed in a window in the middle of the night, beat a man with a Bible, choked him with a chain, and pleaded guilty to felony assault with intent to do great bodily harm less than murder, The Flint Journal reported.

Michael Christopher-Floyd Clack was arrested in July 2019 for allegedly operating while impaired by liquor.

“I was coming from a friend’s wedding and got home really late and my girlfriend wouldn’t let me in the house,” Clack told The Flint Journal. “I fell asleep (in the vehicle).”

A caller reported him to police, saying his car sat in an intersection for two light cycles. He was taken into custody in April 2014 for driving with a suspended license and carrying a concealed weapon.

“I was actually test driving that motorcycle and I took the gun with me. I was dealing with a high-dollar purchase,” Clack told the paper.

Sean Croudy was arrested in 2013 for allegedly drunk driving. He works for the City of Flint and was previously a school social worker.