New York Times economist Paul Krugman has made enough terrible predictions that an unbiased observer might wonder how he is still employed.

From the effect of the internet in the 1990s to the economic consequences of President Donald Trump’s election, Krugman has managed to be on the incorrect side of history in some of the most important moments of our time.

The Internet Is Irrelevant–1998 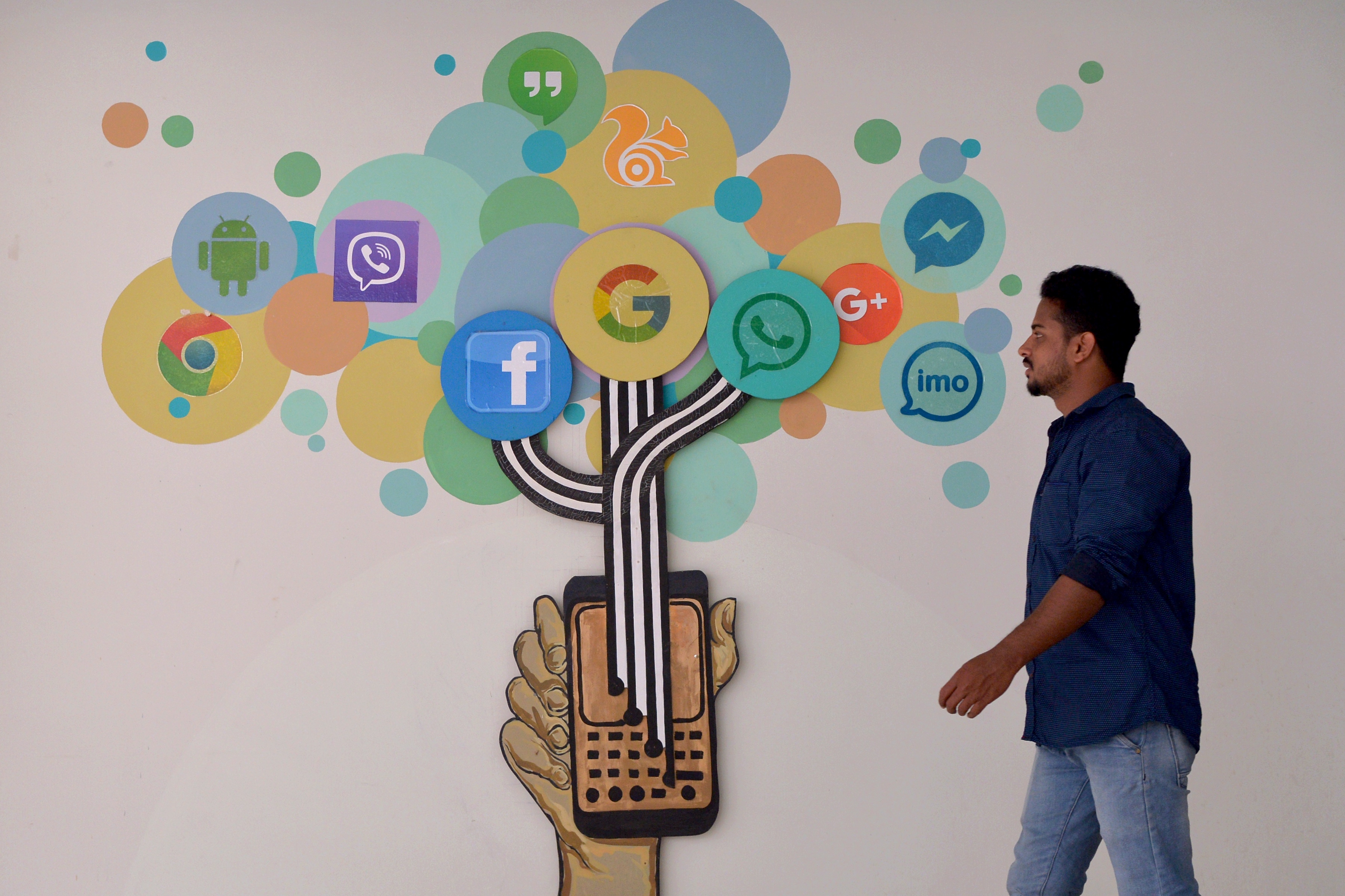 A visitor passes a mural depicting various social medias including Facebook, inside a building in Bangalore on March 22, 2018. (MANJUNATH KIRAN/AFP/Getty Images)

The internet has arguably had the single largest impact on the global economy since the industrial revolution, but it’s safe to say Krugman didn’t see it coming.

“The growth of the Internet will slow drastically,” he wrote in 1998. “As the flaw in ‘Metcalfe’s law’ – which states that the number of potential connections in a network is proportional to the square of the number of participants – becomes apparent: most people have nothing to say to each other! By 2005 or so, it will become clear that the Internet’s impact on the economy has been no greater than the fax machine’s.”

With 2005 come and gone, and the internet revolutionizing virtually every industry even as it created countless more, it’s clear the internet has somewhat eclipsed the fax machine. (RELATED: Sarah Sanders Mocks NYT’s Paul Krugman For ‘Worst Prediction Of The Year)

When asked about the quote, Krugman has tried to explain it away as an attempt at being provocative.

“It was a thing for the Times magazine’s 100th anniversary, written as if by someone looking back from 2098, so the point was to be fun and provocative, not to engage in careful forecasting; I mean, there are lines in there about St. Petersburg having more skyscrapers than New York, which was not a prediction, just a thought-provoker.”

The 1998 issue was Time magazine’s 102nd anniversary, however, and it’s unclear why a writer looking retrospectively from 2098 would talk about 2005 as if it was in the future.

“I must have tossed it off quickly (at the time I was mainly focused on the Asian financial crisis!),” he continued. “Anyway, I was clearly trying to be provocative, and got it wrong, which happens to all of us sometimes.”

The Trump Economy Is Dead, Forever–2016

CLEVELAND, OH – JULY 21: Republican presidential candidate Donald Trump gives two thumbs up to the crowd during the evening session on the fourth day of the Republican National Convention on July 21, 2016 at the Quicken Loans Arena in Cleveland, Ohio. Republican presidential candidate Donald Trump received the number of votes needed to secure the party’s nomination. (Photo by Chip Somodevilla/Getty Images)

If we are to take Krugman at his word on his terrible internet prediction, then perhaps his worst prediction of all time is the first one he made in the Trump-era: that the economy would never recover.

“It really does now look like President Donald J. Trump, and markets are plunging. When might we expect them to recover?” he wrote the day after Trump’s election in 2016. “Frankly, I find it hard to care much, even though this is my specialty. The disaster for America and the world has so many aspects that the economic ramifications are way down my list of things to fear. Still, I guess people want an answer: If the question is when markets will recover, a first-pass answer is never.”

Fast-forward to 2019, and the U.S. economy is booming with the lowest unemployment numbers in decades and high confidence in the economy from the public.

We Will Never Have 3 Percent GDP Growth Again–2017

Dr Paul Krugman, 2008 Nobel Laureate, speaks at a press conference held by the Securities and Futures Commission (SFC) in Hong Kong on May 22, 2009. Krugman was speaking on the economy at a media event to celebrate 20 years of the SFC. AFP PHOTO/MIKE CLARKE (Photo credit should read MIKE CLARKE/AFP/Getty Images)

Krugman argued in 2017 that the U.S. economy would probably never again rise above 3 percent GDP growth thanks to Baby Boomers leaving the workforce in droves.

When asked on Bloomberg whether 3 percent growth was achievable, he answered: “No, we could get there if we get very very lucky, if some wonderful technology comes along or something. Productivity surges for reasons that we don’t understand, but there’s nothing in policy that would raise the growth rate.”

Other predictions favored Krugman on this one, with the GDP growth prediction for the first quarter of 2019 at 2.1 percent, but when the numbers came in the economy had 3.2 percent growth.

When Krugman heard the news, he was dismissive. (RELATED: Paul Krugman Comes Out For Socialism)

“Contrary to what Donald Trump and his supporters claim, we are not seeing an unprecedented boom. The U.S. economy grew 3.2 percent over the past year, a growth rate we haven’t seen since … 2015,” he wrote in May.

Of course, Krugman’s prediction that 3 percent growth would never happen again has nothing to do with how recently  might have happened before.

Krugman made perhaps his most ambitious prediction in September that Ukraine scandal could end with imprisoning thousands of journalists.

Starting to look like two possible outcomes: Trump and a number of others end up in jail, or thousands of journalists end up in prison camps https://t.co/I9DpBQFwtm

But as Trump’s impeachment has been successful, it’s clear he will be acquitted by the Senate, and the administration has yet to round up a single journalist.

But it’s critical to remember these are only Krugman’s worst predictions so far. His career is far from over, and he may outdo himself again.

1
'We Don't Live In A Police State': Ted Cruz Blasts Democrats For 'Driving A Car Alone' Citation
US
2
Trump Says White House Coronavirus Model Overestimated Number Of Hospital Beds Needed
US
3
MyPillow’s Mike Lindell Punches Back At Jim Acosta: Unfit To Print
Editorial
4
Here Are All The Funding Landmines Congress Stuffed Into The 3rd Coronavirus Stimulus Bill
Politics
5
'I Felt A Real Pain In My Heart For My Country': David Benham Arrested Outside NC Abortion Clinic Over Coronavirus Orders
US