The 92-year-old pope emeritus, who resigned from his position as head of the Catholic Church in 2013, is publishing a book Feb. 20 that he co-authored with Cardinal Robert Sarah through Ignatius Press: “From the Depths of Our Hearts.”

Ignatius called the book “unprecedented,” saying it takes a “serious and unflinching look at the crisis in the Catholic Church” that will “honestly address the spiritual challenges faced by priests today, including struggles of celibacy.”

“From the Depths of Our Hearts” will be released in France on Wednesday and carries significance within the Catholic Church as this will be the first time in the past two millennia a retired pope has weighed in on a matter his predecessor is considering. (RELATED: Here’s Why Authors, Theologians Think Pope Francis Cooperates With The Chinese Government Despite Persecution Of Christians)

The book comes as bishops within the Catholic Church push Francis to consider allowing priests to marry. An October 2019 Synod of Bishops in South America ended with the bishops voting that Pope Francis should allow married men to be ordained to the priesthood in Brazil in the Amazon region. Francis is expected to publish his own thoughts on the proposal in upcoming months.

Both Benedict and Sarah remind readers of the importance of priestly celibacy in “From the Depths of Our Hearts,” and Sarah directly calls on Pope Francis not to concede on this matter.

“I humbly beg Pope Francis to … veto any weakening of the law of priestly celibacy, even limited to one or the other region,” writes the cardinal, according to the National Catholic Register.

“We are very happy to have made an essential contribution to the future of the priesthood,” Sarah tweeted Sunday. “His magnificent reflection will help us all to deepen the great mystery of the Church. My own text continues its meditation. I wish you a good reading.”

But the Vatican’s editorial director, Andrea Tornielli, wrote an editorial Monday attempting to align Benedict’s book with Francis, saying the book is just a contribution and was written in obedience to Francis. 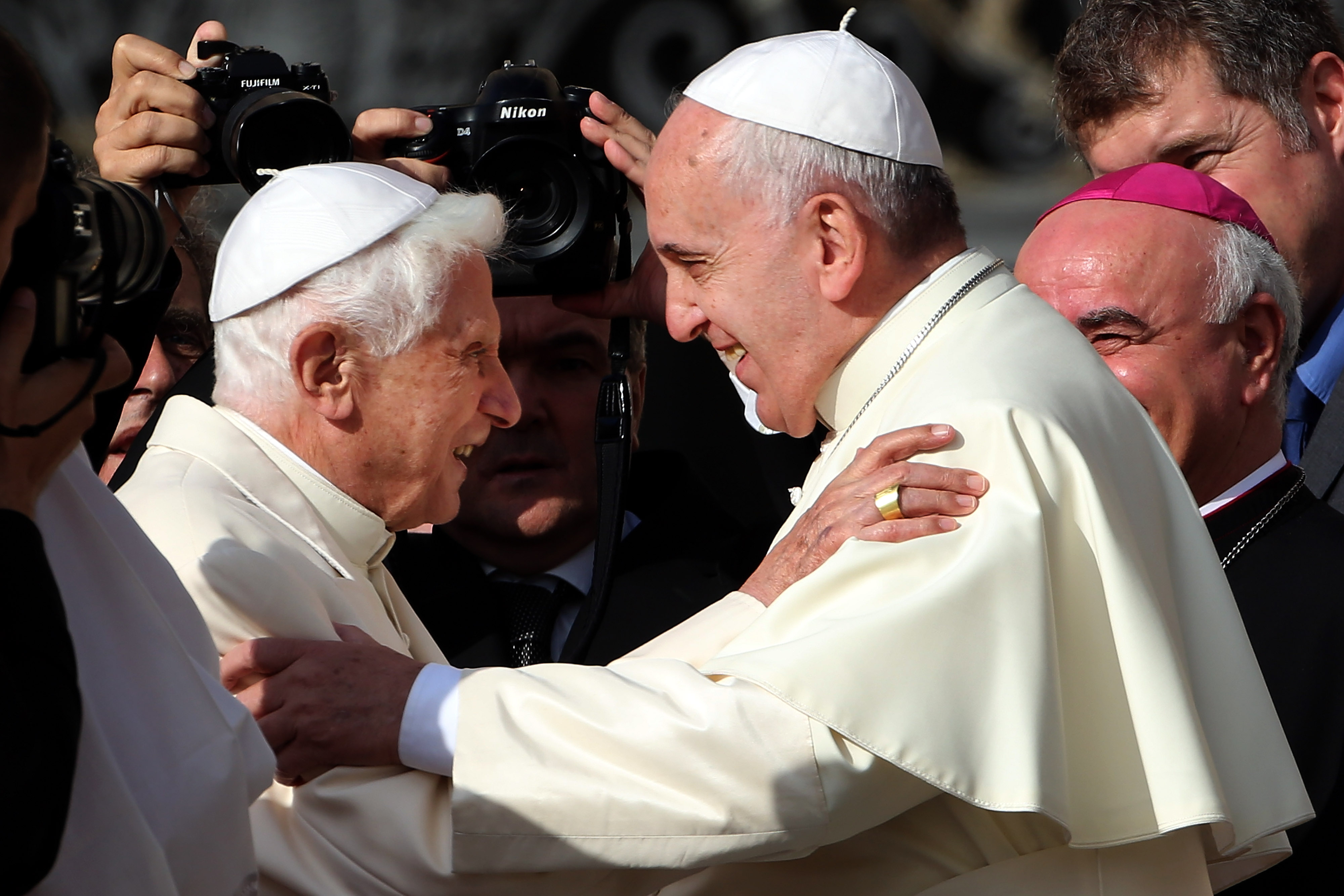 Pope Francis (R) greets Pope Emeritus Benedict XVI as he arrives at St. Peter’s Basilica during a celebration for grandparents and the elderly on September 28, 2014 in Vatican City, Vatican. (Photo by Franco Origlia/Getty Images)

Benedict and Sarah wanted to see the book published after commotion surrounding the Amazonian Synod had died down, Brumley said.

“Like Pope Francis, they thought the media hoopla and the effort of some Catholics to frame the Synod as about optional celibacy distorted the truth,” Brumley told the DCNF. “There is discussion in certain Church circles tending toward optional priestly celibacy, supposedly as a result of ‘synodality.'”

Brumley added that the authors don’t want the “theological and spiritual case for priestly celibacy to be overshadowed by church politics, various media antics, factionalism and the like.”

“The book is about the priesthood, but also about the wider values of discipleship, obedience and sacrificial Christian love,” he explained. “One hope is for the book to help foster a deeper appreciation of the celibate priest’s sharing in Christ’s identity as Bridegroom of the Church. To encourage priests to know they’re doing the right thing.”

Brumley said he hopes every priest reads the book and becomes closer to Christ through doing so. He also said the book provides greater understanding and support for priests to the laity of the Catholic Church.

“Only through mutual understanding, support and prayer flowing from charity can we overcome the current crisis in the Church,” he added.

Brumley has also come out against those who say the book signifies a rift between Benedict and Francis.

“Why some folks choose to interpret the new book by Pope Emeritus Benedict and Cardinal Sarah in anti-Pope Francis ways speaks volumes,” he tweeted Sunday. “Let’s pray for healing for the critics that they can rejoice in a new work from two great churchmen of our time, including a major theologian.”

The Vatican did not respond to requests for comment from the DCNF.