TikTok removed a video LiveAction posted and then informed the group that it was permanently banned Thursday, Rose said in her statement.

Live Action had published “an educational video to our TikTok highlighting lives saved by our content & raising awareness of the importance of speaking out on abortion,” Director of External Affairs Alison Centofante said in a statement. The platform reportedly told Live Action around 2:30 p.m. that the video “violated community guidelines.”

Live Action immediately appealed the removal of the video, Centofante said, and around 3 p.m. received an email from TikTok announcing that the Live Action account “was banned due to multiple Community Guidelines violations.”

My team grew the largest pro-life voice on the platform

Tik Tok has not responded to Live Action’s request for an explanation as to why the account was removed and what specific community guidelines were violated. (RELATED: Pinterest Labels Live Action Content As Pornography — Then Bans The Pro-Life Group From Pinterest) 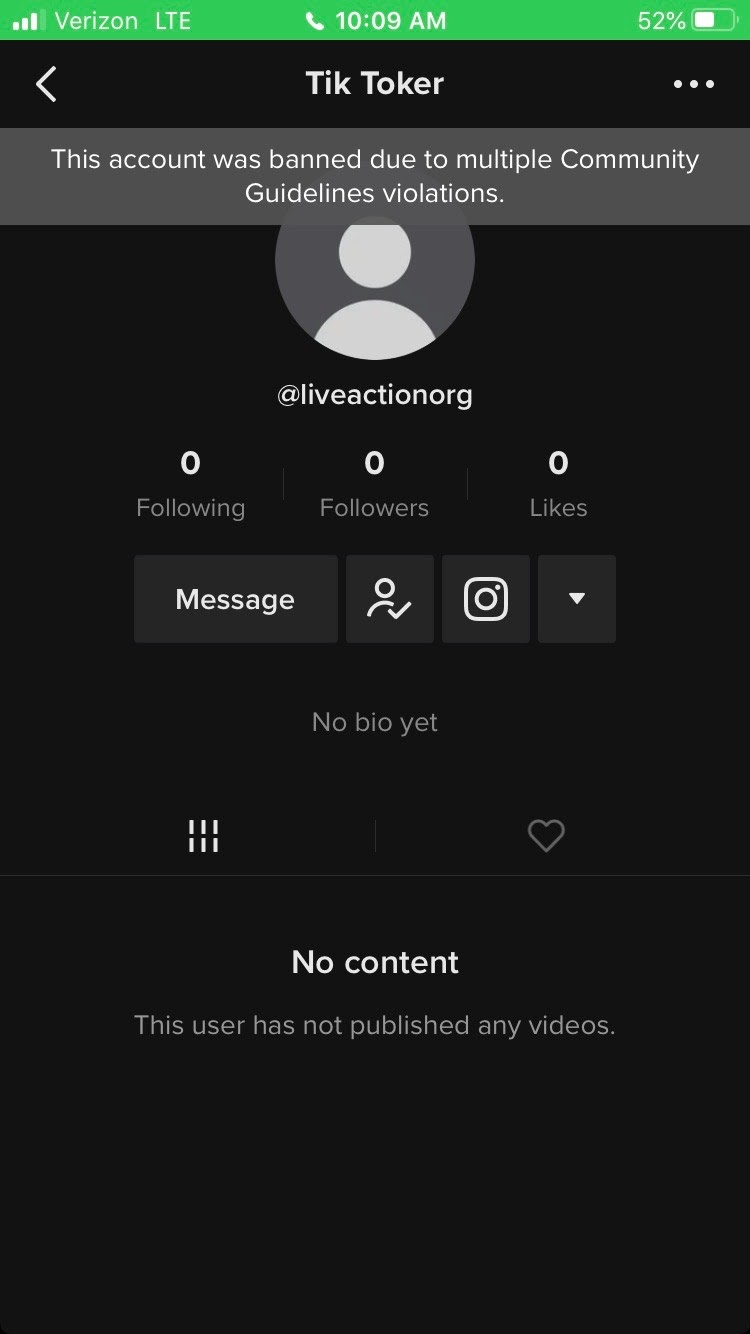 Centofante added in a press release that Live Action had garnered 21,000 followers on TikTok since joining the platform in August.

Live Action joined TikTok in 2019 as part of an ongoing effort to reach Gen Z and millennials “with the truth about abortion,” Rose said in a statement. (RELATED: ‘We Were Targeted’: Live Action Founder Lila Rose Says Facebook Censored Them With Biased Fact Checkers)

“Tiktok has a larger active user base than Twitter, Pinterest, Reddit, and Snapchat,” Rose said. “Its user base is nearly as big as Instagram. Our innovative, educational videos were hugely popular and grew our following to over 21k followers, quickly making Live Action the largest pro-life voice on the platform.”

The Live Action TikTok account shared baby photos and videos that highlighted “the illogic of the pro-abortion movement,” Rose added. Though Live Action has now been banned, Rose says that TikTok allows pro-abortion accounts to remain on the platform such as the video “How to DIY: Deletus your fetus edition.”

“Live Action appealed TikTok’s decision to remove one of our videos and within a half hour our account was completely removed on the platform,” Rose said. “No more account, no more videos. This is blatant viewpoint discrimination and an egregious attempt to silence pro-life voices. TikTok should reinstate our account in full and allow all voices on the platform.”

Rose predicted to the Daily Caller News Foundation in December that Live Action would face suppression on social media in 2020, describing how the organization was suppressed on Facebook, on Twitter, and on Pinterest during the past year.

“Even with this level of Silicon Valley suppression, Live Action is seeing the pro-life movement grow at rapid speeds and increased calls for our content to be distributed globally to change more hearts and minds,” she said in December.

UPDATE: TikTok reinstated Live Action’s account Friday afternoon, saying in a statement to the DCNF that the platform determined after a review that Live Action did not violate TikTok Community Guidelines, adding that “the issue was the result of a human error by a moderator.”