A couple of hours later, fact checker Daniel Dale revised the fact check to clarify that Trump had falsely claimed that Comey admitted to leaking in a May 2017 committee exchange with Republican Iowa Sen. Chuck Grassley. The CNN Twitter post now reads: “Fact check: Trump falsely claims Comey admitted to leaking to Grassley (Clarification: the headline of this post has been updated to make clear that it is about what Comey said to Grassley.)”

Fact check: Trump falsely claims Comey admitted to leaking to Grassley (Clarification: The headline of this post has been updated to make clear that is about what Comey said to Grassley.) https://t.co/sQbCm8ZBZG pic.twitter.com/UnB4oxs2Dz

The “fact check” came as a result of Trump’s post-impeachment acquittal speech to supporters and media Thursday in the East Room of the White House. Trump incorrectly recalled that Comey had first admitted to leaking information under cross-examination from Grassley during a session of the Senate Judiciary Committee. (Professor: Comey’s Leaking Of Memos Could Land Hi In Legal Hot Water) 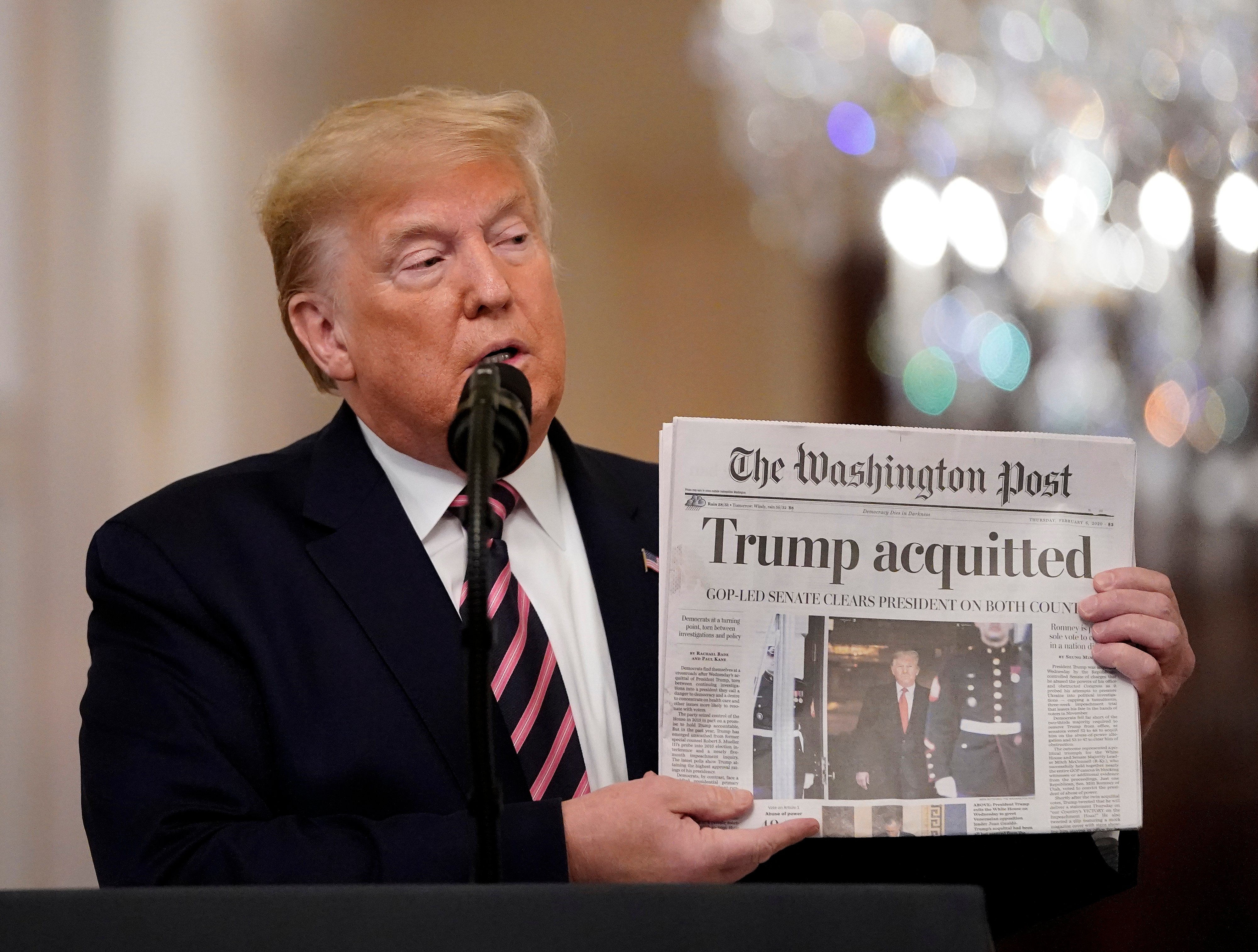 President Donald Trump holds a copy of The Washington Post as he speaks in the East Room of the White House one day after the U.S. Senate acquitted on two articles of impeachment, ion February 6, 2020 in Washington, DC. (Photo by Drew Angerer/Getty Images)

In fact, Comey had admitted during testimony before the Senate Select Committee on Intelligence in June 2017 to coordinating a leak of a memorandum that recorded his private conversation with President Donald Trump.

“I asked a friend of mine to share the content of the memo with a reporter,” Comey said. “I didn’t do it myself for a variety of reasons.” The friend was later revealed to be Columbia law professor Daniel Richman. (Comey Memos Leaked — Here’s What They Say)

But CNN’s initial fact check suggested Trump was lying in stating that Comey had ever admitted to leaking.

The network’s subsequent fact check clarified that Comey did not admit to leaking to Grassley. That is accurate, but the senator, who was then the chairman of the Senate Judiciary Committee, was aware of Comey’s activities. Grassley wrote in a letter to then-deputy Attorney General Rod Rosenstein, “If it’s true that Professor Richman had four of the seven memos, then in light of the fact that four of the seven memos the Committee reviewed are classified, it would appear that at least one memo the former FBI director gave Professor Richman contained classified information.”

Then-Senate Judiciary Committee Chairman Chuck Grassley (R-IA) talks with reporters as he heads for a meeting at the U.S. Capitol Oct. 02, 2018 in Washington, D.C. (Photo by Chip Somodevilla/Getty Images)

The Department of Justice is continuing to examine Comey’s handling of documents and is currently investigating whether he leaked classified information about a potential Russian disinformation campaign to reporters.

James Comey admitted leaking *under oath* and was even referred for criminal prosecution for leaking and document theft. https://t.co/mvTg4laR1D