The Utah Republican Party is reportedly considering multiple resolutions following Sen. Mitt Romney’s vote to convict President Donald Trump in the impeachment trial, including a resolution calling for his resignation.

According to local Salt Lake City news outlet 2KUTV, “the Utah Republican Party has pending resolutions on Romney: one that expresses support for Trump’s acquittal, another that supports legislation to recall a U.S Senator and a third that calls for Romney to ‘immediately resign’ from office.”

The Utah GOP will possibly vote on these resolutions on Saturday, February 29, the report also states. It is unclear what kind of support the resolutions have. 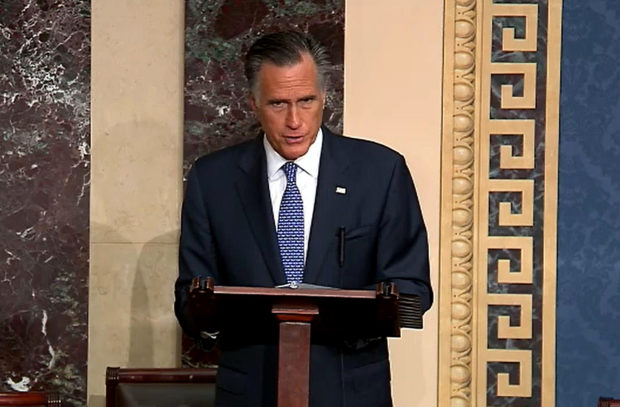 In this screengrab taken from a Senate Television webcast, Sen. Mitt Romney (R-UT) talks about how his faith guided his deliberations on the articles of impeachment during impeachment proceedings against U.S. President Donald Trump in the Senate at the U.S. Capitol on February 5, 2020 in Washington, DC. Photo by Senate Television via Getty Images

Romney was the single Republican who voted for Trump’s removal from office on the charge of abuse of power. He did not, however, vote for Trump’s conviction on the charge of obstruction of Congress. (RELATED: ‘Pierre Delecto Strikes Again’: Tucker Carlson Mocks Mitt Romney’s ‘Silly Moral Preening’)

Trump was acquitted anyway with the rest of the Republicans voting for acquittal on both charges, and every Senate Democrat voting for removal.

Following Romney’s vote, Donald Trump Jr. attacked the Utah senator, calling for him to be expelled from the Republican Party.

“Mitt Romney is forever bitter that he will never be POTUS. He was too weak to beat the Democrats then so he’s joining them now,” he said. “He’s now officially a member of the resistance & should be expelled from the @GOP.”