Countries around the world are taking vast measures to stave off the coronavirus, which has continued its spread from China and infected over 150,000 people internationally.

President Donald Trump declared a national emergency Friday, freeing up $50 billion in federal resources to combat the outbreaks domestically. The U.S. is also banning travel from Europe, most recently with the inclusion of the U.K., bringing the total of European countries affected by the ban to 28.

Here are the countries around the world where lockdowns, quarantines, travel restrictions and border closings, and other efforts have gone into effect to contain the coronavirus spread. (RELATED: Here Are All The Major Places And Events Closed Due To Coronavirus Pandemic)

Afghanistan: Closure of all educational institutions until April 21; border closures with Iran & Pakistan

Algeria: Suspension of all sea and air travel outbound and inbound from Europe beginning Thursday; suspension of flights to/from Morocco

Antigua and Barbuda: All foreign nationals traveling from or transiting through mainland China temporarily banned from entry

Armenia: Schools, universities closed until at least March 23, tightened border control with Iran and re-introduced entry visas for Iranian citizens, suspension of some round trip flight routes from Yerevan to Italy until April 8

Australia: Federal government urges Australians abroad to return home ASAP via commercial flights; 14-day self-isolation period for Australians returning from China, Japan, South Korea, Iran, Italy; non-citizens who have transited or been in China are not allowed to enter or transit through Australia; flight suspensions to China

Azerbaijan: Road and air transportation to and from Turkey suspended, border closings with Georgia; school activities suspended until March 27; suspension of entry for trucks and importing from Iran

Bahamas: Entry ban on non-residents that have traveled to China, Iran, South Korea and Italy

Bahrain: All schools and universities suspended until March 29; Bahrain’s national airline suspends all flights to and from Saudi Arabia

Bolivia: Suspension of flights to and from Europe; schools closed until end of March; ban on gatherings of more than 1,000 people

Canada: Borders shut to non-citizens and non-permanent residents and their families with exception to Americans; Air Canada suspends flights to and from Italy; parliament closed for five weeks; cruise ship with more than 500 people banned from docking in country’s ports until July 1; bans throughout country of gatherings exceeding 250 people; schools closed in Ontario; closure of all child care facilities, public libraries, and community centers in Toronto; all long-term care facilities in Nova Scotia closed to visitors; schools and child care centers in Nova Scotia are closed

Cape Verde: All flights to and from Italy suspended until March 20; Cabo Verde Airlines suspends service to Washington, D.C.

Chile: Ban on public events with more than 500 people, partial closure of borders

Comoros: Travelers from Japan and China may be denied entry. Travelers from other affected countries will be quarantined for 14 days in an unaffected third-party country

Cyprus: Ban on entry for non-residents for 15 days beginning March 15

Czech Republic: National lockdown; Czech nationals banned from traveling to high-risk countries including Germany, France, Austria, Belgium and foreigners from these countries are banned from entering Czech Republic; all shops except food stores, pharmacies all closed; all universities and schools shut down; public events with over 30 people in attendance banned

El Salvador: Ban on all non-resident and non-diplomat visitors; schools suspended for 21 days

Eritrea: Travelers from China, Italy, South Korea and Iran must be quarantined

Fiji: Travelers from Italy, Iran and South Korean cities of Daegu and Cheongdo not permitted entry; travel ban on all visitors who had been in mainland China within 14 days of intended travel to Fiji

Finland: Closure of schools and universities; events with more than 500 attendees cancelled

Germany: Non-essential shops closed; restaurants only permitted to open between 6 a.m. and 6 p.m.; no tourist travels domestically or abroad; overnight stays only permitted for work-related travel; places of worship to close; borders with Austria, Switzerland, and France closed; flights with Iran suspended

Greece: All museums, ruins, shops, bars and restaurants shut down; all flights to Italy banned

Grenada: Travel restrictions for visitors who recently traveled in China

Hungary: Closed  borders to all foreigners, with only Hungarian citizens allowed to enter

Indonesia: Ban on entry of all foreign visitors arriving from 10 of the hardest-hit regions of Iran, Italy and South Korea; Jakarta closes schools for at least two weeks

Iran: Suspended all flights to and from China; public spaces including schools and universities closed 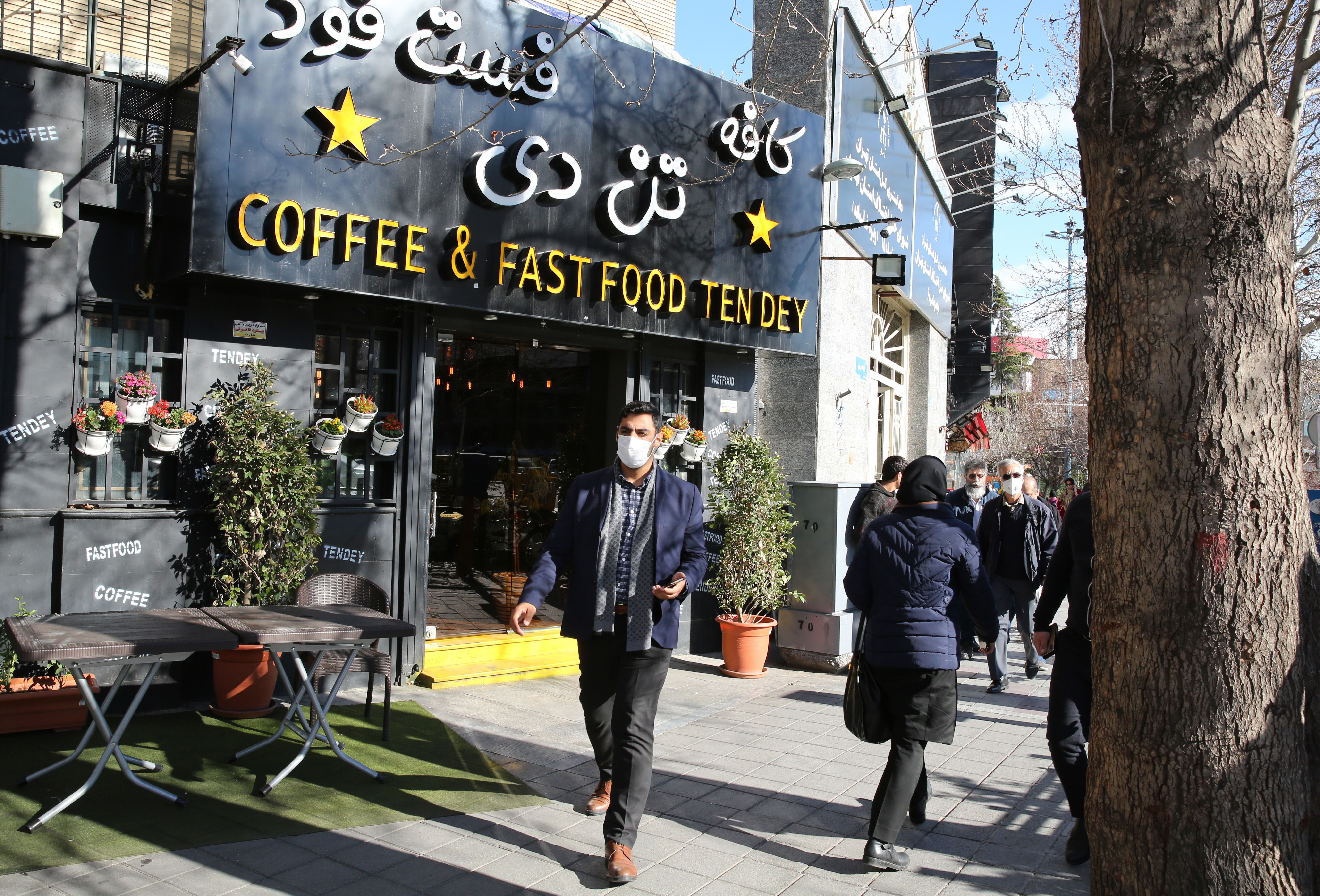 Iranians wear protective masks in the streets of Tehran on March 2, 2020, following the COVID-19 illness outbreak, (Photo by ATTA KENARE/AFP via Getty Images)

Iraq: All Iraqi airports, including those in the Kurdistan Region, will close to commercial flights from 6 p.m. on March 17 until 6 p.m. on March 24; 72-hour curfew will be imposed on Erbil and Sulaimani (Kurdistan Region) starting from March 16 at midnight; public gatherings banned; ban on entry of travelers from Kuwait, Bahrain, China, Iran, Japan, South Korea, Thailand, Singapore, Italy, Germany, Qatar; closed border with Iran; curfew in Baghdad province from March 17-24

Israel: Public gatherings of more than 10 people banned; ban on entry of foreign nations who have been in China, Thailand, Singapore, Japan, South Korea (temporary); Israeli citizens must self-isolate after returning from “at risk” areas

Italy: National lockdown; Rome’s second airport, Ciampino, is closed, while Fiumicino is to close one of its three terminals from March 17

Jamaica: Jamaica’s air and seaports will be closed to incoming passenger traffic for a period of at least 14 days (announced March 21)

Kazakhstan: All public events banned; all schools and colleges closed

South Korea: Entry ban on foreigners who had been to Hubei Province, China (effective February 4)

Latvia: All international travel by air, railway, sea and road will be banned beginning March 17; all public gatherings of over 15 people banned; only Latvians and foreigners with residency rights able to enter country; schools closed

Luxembourg: Closure of all places and businesses open to the public

Madagascar: Airlines prohibited from servicing passengers who had visited China, Hong Kong and Macao up to 14 days before intended arrival in the country

Malaysia: All mass gatherings encouraged to be cancelled; travel ban on all arrivals from Denmark

Maldives: Temporary ban on all cruise ships from entering or docking in the islands; travelers from China banned

Moldova: All foreigners from affected countries banned from entering by plane

Montenegro: Gatherings banned, schools and universities closed, smaller border crossings closed; government warns that criminal charges would be filed against anyone not implementing its measures

Morocco: Flights to and from 25 countries including the most affected suspended; all schools closed; public gatherings of more than 50 people banned

Mozambique: Travel to and from China suspended

Namibia: Mass gatherings banned for 30 days, inbound and outbound travel to and from Qatar, Ethiopia and Germany suspended

New Zealand: National lockdown; travel restrictions for individuals who had traveled through mainland China and Iran

Peru: Schools suspended until March 30; Travelers from China, France, Italy and Spain must quarantine at home for 14 days

Poland: Full checks at border crossings until March 23; ban on public gatherings of more than 50 people; restaurants, clubs, and bars only available for take-out orders; international flights and trains suspended from Sunday; shopping centers shut down

Portugal: All passenger flights to Italy suspended for 14 days beginning March 11; schools and public places shut down in affected regions in Portugal; all in person classes at select universities suspended

Russia:  Entry ban on foreign visitors; most flights to and from Italy, Germany, France and Spain suspended; suspension of tourist visas to Italian citizens 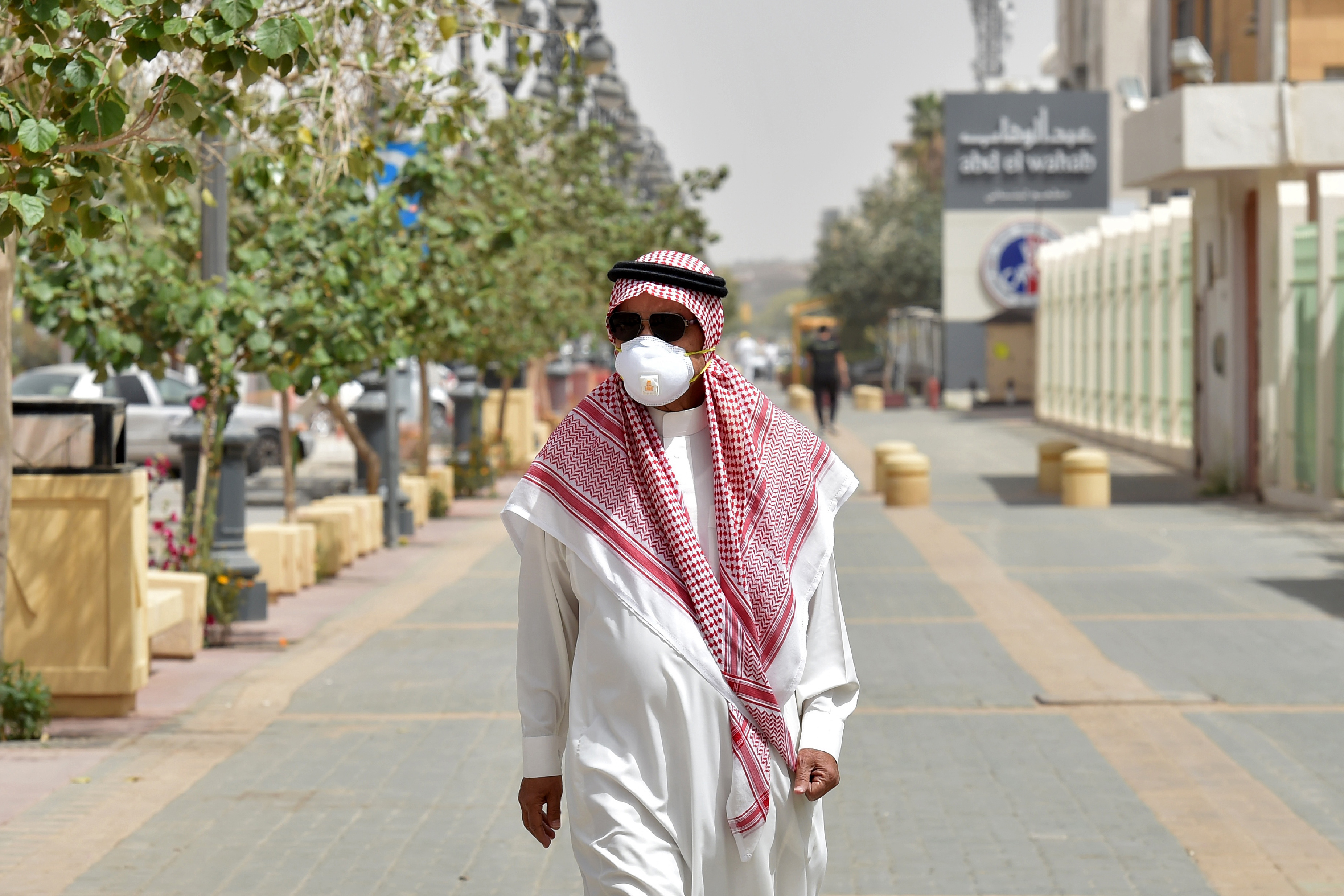 A Saudi man, wearing a protective mask as a precaution against COVID-19 coronavirus disease, walks along Tahlia street in the centre of the capital Riyadh on March 15, 2020. (Photo by FAYEZ NURELDINE/AFP via Getty Images)

Seychelles: entry ban on any person that has been to China in the past 14 days, effective February 3; exit ban on anyone in Seychelles from traveling to China, except returning Chinese residents, effective January 29

Sudan: Suspension of visa issuances and flights services to eight countries including Egypt and Italy

Switzerland: State of emergency; all restaurants, bars, cafes, and shops will be closed starting at midnight March 16; all public and private events will also be banned; All measures will last until April 19th

Ukraine: All air traffic closed as of March 17; all schools and universities closed; public gatherings of 200 or more people banned

Venezuela: All flights from Colombia and Europe suspended for at least a month

Vietnam: All visas suspended; schools closed; visitors from countries including the United States must quarantine; entry denied to travelers from the UK and the 26 Schengen countries and includes travelers that have visited or transited through these countries in the past 14 days, effective for 30 days