American Bridge 21st Century and Pacronym are cutting ads thrashing Trump’s handling of the virus and becoming two of the first super PACs to go after the president on the health crisis, The Washington Post reported. Both groups also have ties to two large nonprofit groups — New Venture Fund and Sixteen Thirty Fund — connected to a massive left-leaning consulting group.

Sixteen Thirty Fund and nonprofit NVF are tied into the same sprawling network, according to an analysis by the Daily Caller News Foundation. Arabella Advisors, a philanthropic consulting company based in Washington, D.C., manages four nonprofits, including the NVF, Sixteen Thirty Fund, Hopewell Fund and the Windward Fund.

Sixteen Thirty Fund has not responded to the DCNF’s request for comment, while NVF acknowledged making a grant to ACRONYM in 2018 but noted that it “has nothing to do with the activities at PACRONYM or American Bridge.” NVF also notified the DCNF that it provided a “grant to the Daily Caller News Foundation in the past.”

Arabella representative Steve Sampson called NVF merely a “client of ours,” even though the consulting group shares a Washington, D.C., office with all four groups, according to NVF and Sixteen Thirty Fund’s 2018 IRS records. American Bridge has not responded to the DCNF’s request for comment. 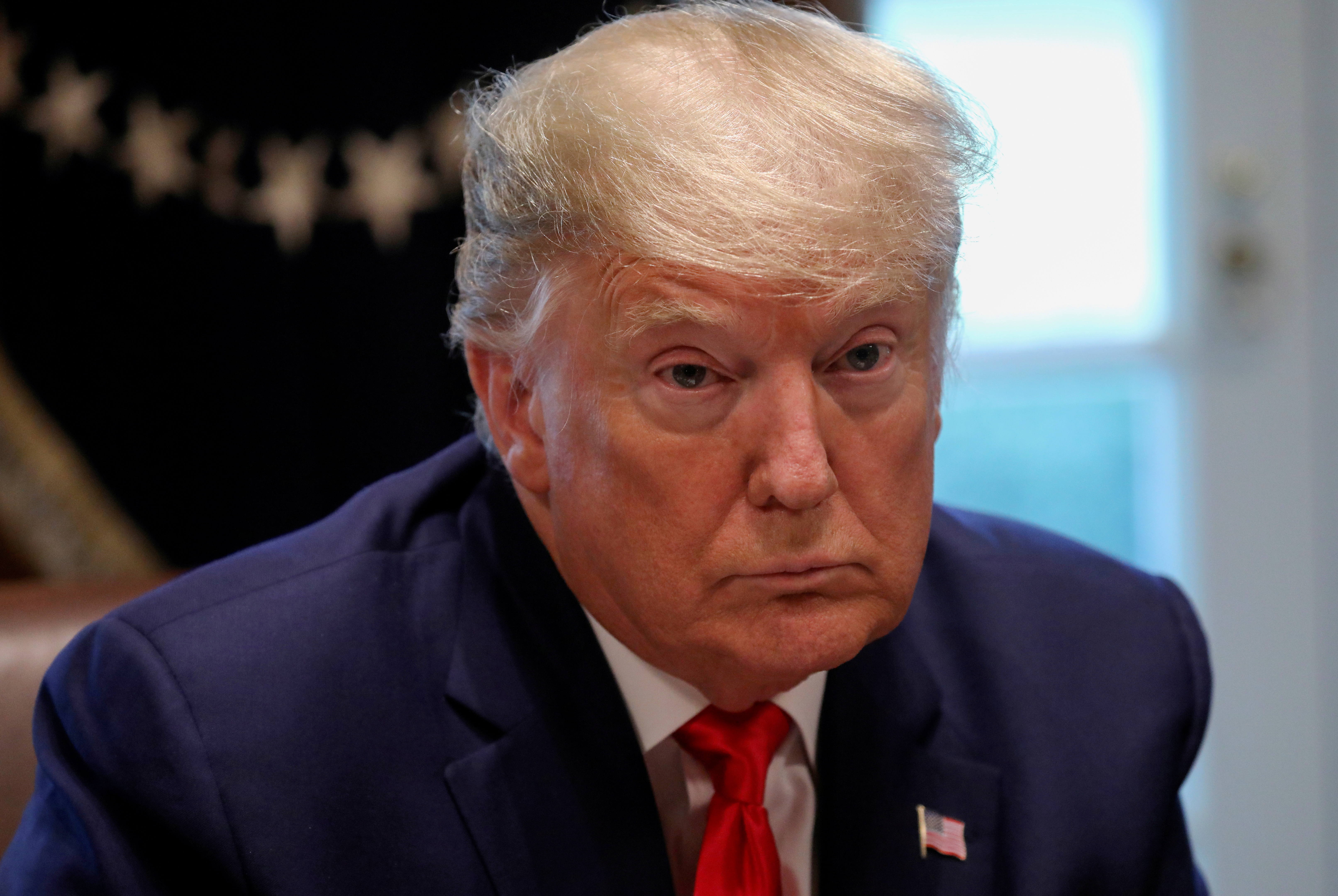 U.S. President Donald Trump hosts a meeting of the coronavirus task force with pharmaceutical executives to discuss developing a coronavirus vaccine in the Cabinet Room of the White House in Washington, U.S., March 2, 2020. REUTERS/Leah Millis/File Photo

Arabella’s network raked in $582 million in 2017 while taking advantage of tax laws allowing it to conceal the identity of most of its donors, according to a 2019 report from the Capital Research Center, a group that investigates nonprofits and other organizations’ spending habits. Other groups have raised alarms about the network as well.

“Arabella Network is the umbrella, and they have these two funds that flow toward both of these groups. A clearly full-blown left-wing arm that is casting itself as a nonprofit is politiicizing this event,” former Nevada Attorney General Adam Laxalt told the DCNF.

“American lives are more important than scoring cheap political points,” he added after suggesting that the group is striking while the iron is hot and making certain they capitalize on a crisis that has so far killed thousands of people.

Some Democrats are taking on a similar approach.

Former Vice President Joe Biden, for instance, is also criticizing Trump’s response, which has been off-beat, with the president shifting from likening the virus to the flu to restricting travel to China where the virus originated.

Laxalt is referring to Pacronym’s announcement on March 17 to plow $5 million into a digital advertising campaign railing against Trump’s coronavirus response. One of the group’s Facebook ads on March 25 suggested Trump “dismantle a federal team working on pandemics” ahead of the virus outbreak. The ad is published through Four is Enough, a Pacronym project.

American Bridge, for its part, is also thrashing Trump’s handling of the issue.

The group is running coronavirus-related ads in Michigan, Pennsylvania and Wisconsin, all of which are battleground states that the president won in 2016 but Democrats say are in play come 2020. The group’s Facebook ads lashing out at Trump are similar to Pacronym’s content.

“Neglect. Botched responses. Cuts at the Centers for Disease Control,” American Bridge noted in an ad that ran March 18 to 30. 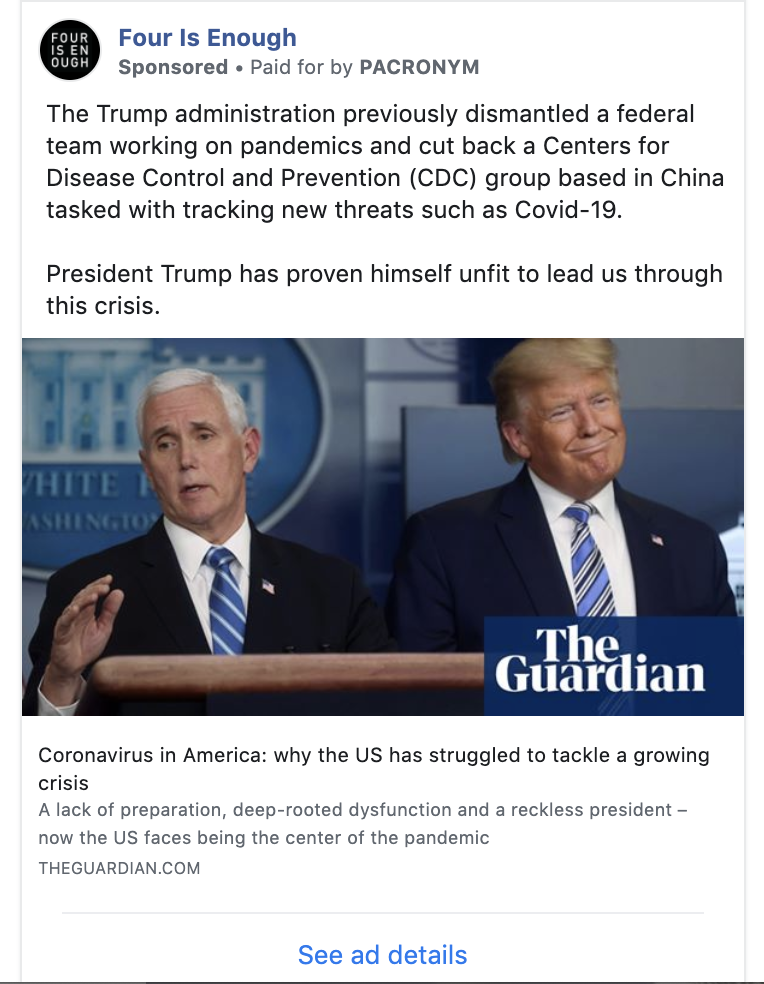 Screenshot of a Pacronym ad criticizing President Trump for his response to coronavirus. 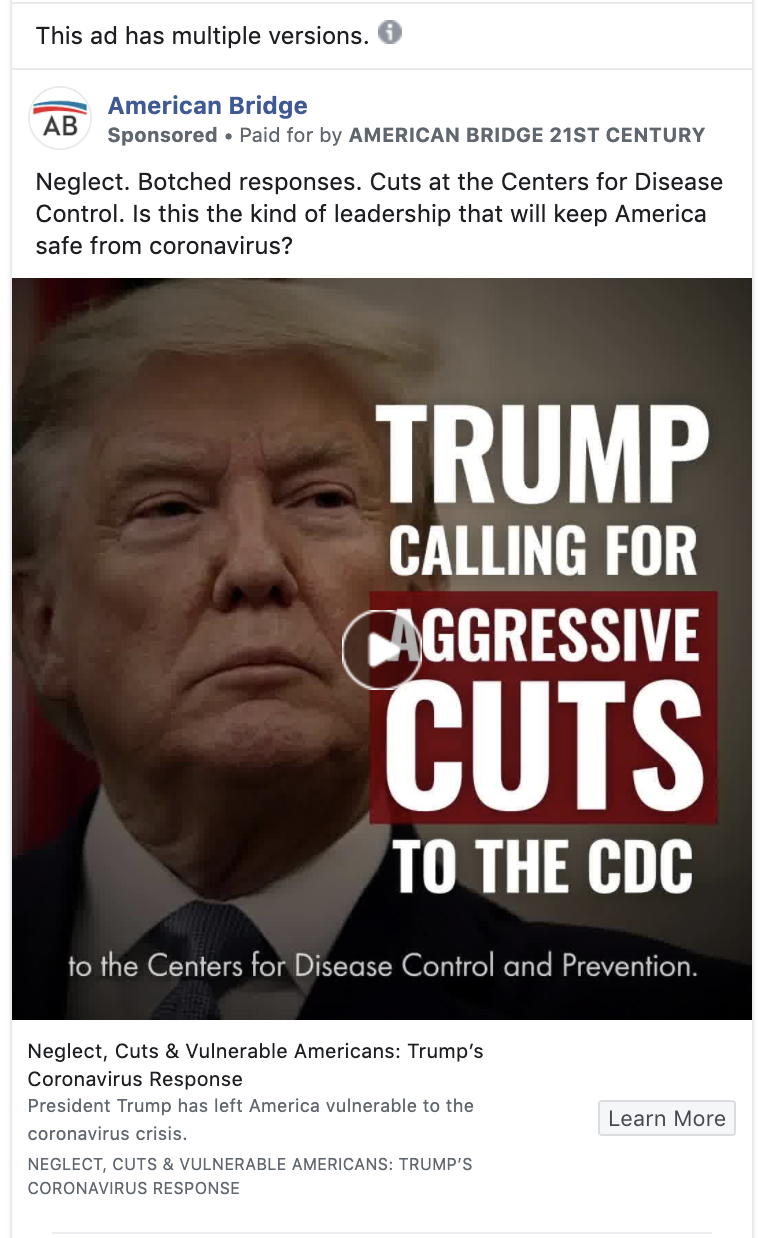 “This is a public health issue and a national security issue, but it’s also a public policy issue and thus a political one,” Tara McGowan, chief executive of the group’s board, told The Washington Post on March 17.

Some academics argued that orchestrating such a campaign skirts ethical rules. Running advertisements thrashing the president during a health crisis looks bad, according to Daniel Kreiss, a professor of political communication at the University of North Carolina at Chapel Hill.

“It’s a very fine line between ensuring that the president has the legitimacy to speak authoritatively on what Americans must do in order to be safe, and the very real and legitimate questions to raise regarding how the president has handled this crisis given that he’s on the ballot in November,” Kreiss told WaPo in a March 17 report addressing the ad campaign push.

“The timing of attacking the president in battleground states is appalling. If they are going to do it, then you name the place. I think that doing it right this second is outrageous,” he told the DCNF.

Meanwhile, ACRONYM’s McGowan is also creating a constellation of local news websites that act as progressive arms targeting the president and his policies.

McGowan, a digital producer for Obama for America in 2011 and the proprietor behind ACRONYM, raised at least $25 million from wealthy liberals to create a media company called Courier Newsroom that is designed to deliver information favorable to Democrats. Courier is rolling out newspapers in swing states to counter what its founder believes is right-wing spin on Facebook and across the digital domain.

Along with the Courier Newsroom, McGowan is reportedly creating Virginia Dogwood and Arizona’s Copper Courier, among others that are expected to roll out in Michigan, North Carolina, Pennsylvania, Virginia and Wisconsin, all battleground states.