Following the White House press briefing on coronavirus Monday, it appears that ABC reporter Jon Karl gives a salute to Dr. Anthony Fauci, who returned the gesture with “finger guns.”

In a brief interaction only picked up on by a handful of Twitter blue checks, Karl, who was eviscerated by President Donald Trump during the briefing, can be seen giving a little salute to Fauci.

The doctor then does the “finger gun” motion.

Karl appeared to acknowledge the interaction on Twitter, “liking” a tweet from a commentator wondering who Fauci was shooting his finger guns at. 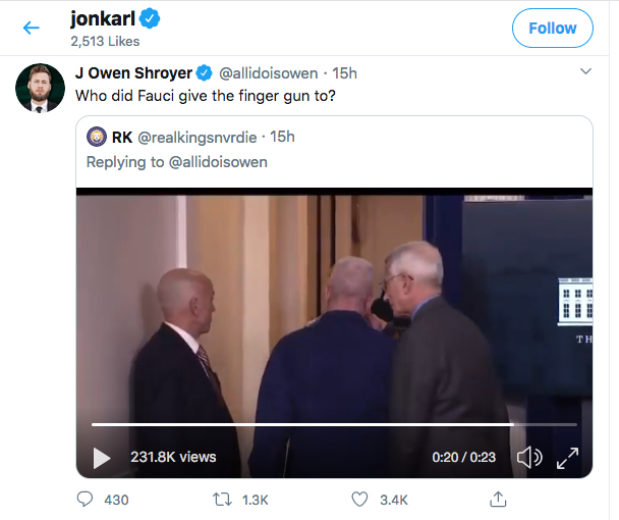 Trump ripped into Karl Monday over a dispute about a government official who authored a critical report about coronavirus testing serving in the Obama administration.

“You’re a third rate reporter, and what you just said is a disgrace. Ok?” Trump told Karl. The president also said that Karl “will never make it.” (RELATED: Trump Asks Reporter If She’s Working For Chinese Government After Pro-Beijing Questions)

During the briefing, Fauci also said that life in America may not “ever” go back to the way it was before coronavirus.

“If you want to get to pre-coronavirus, you know, that might not ever happen, in the sense of the fact that the threat is there,” Fauci said.