George Papadopoulos says he had forgotten about Facebook messages that an old college classmate sent him three years ago — communications the former Trump aide says have taken on new significance with the recent declassification of several documents from the FBI’s Trump-Russia probe.

“Do you want me to get you a burner phone from South Carolina?” Papadopoulos’s friend from their days at DePaul University wrote on March 9, 2017.

“Lmao,” Papadopoulos replied in the message thread, which he shared with the Daily Caller News Foundation.

“I’ll pay cash and get it from a random gas station so you can’t be traced,” said the friend, Jeffery Wiseman. 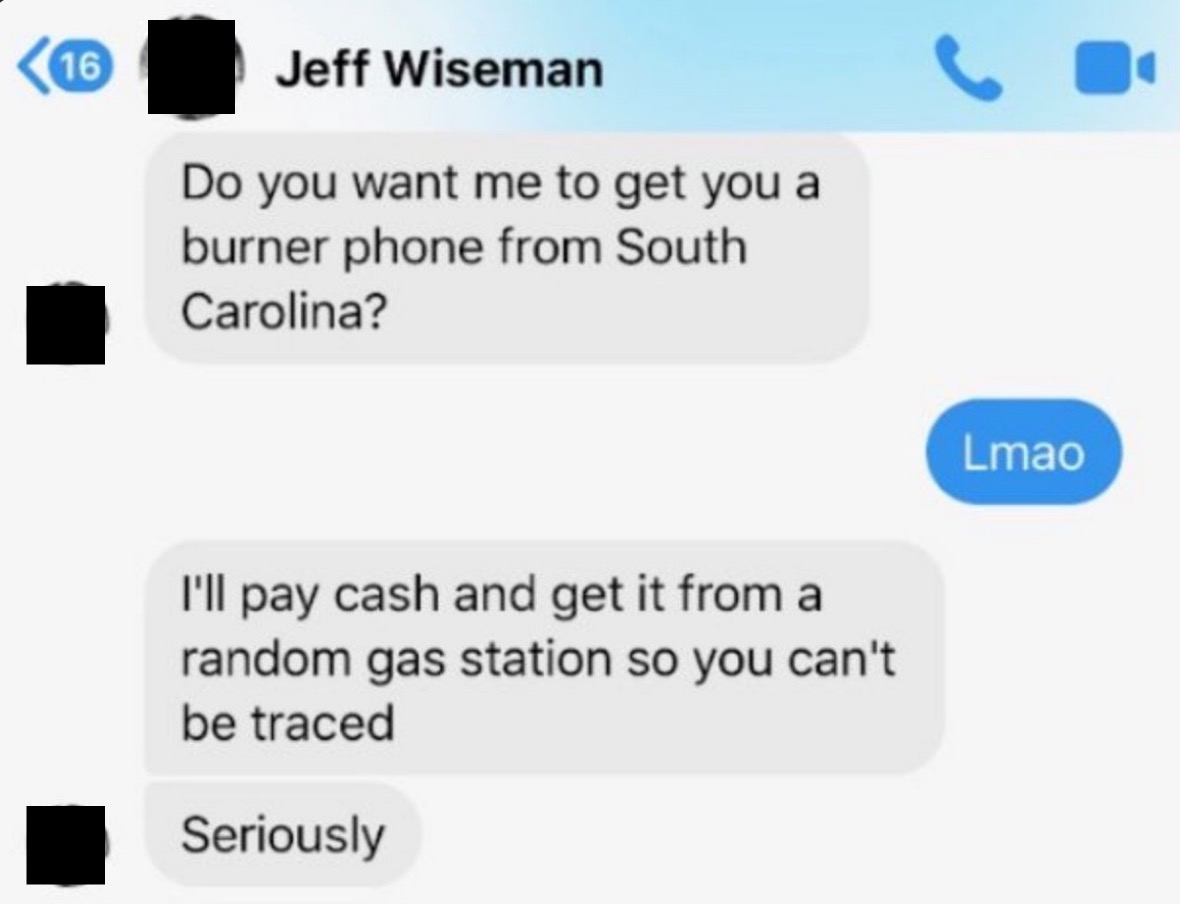 The messages came at a chaotic time for Papadopoulos.

Just weeks earlier, on Jan. 27, 2017, FBI agents visited Papadopoulos at his home in Chicago to quiz him about his tenure on the Trump campaign, court documents show. Unknown to Papadopoulos at the time, the FBI was conducting a counterintelligence investigation into whether Trump associates conspired with the Russian government to influence the 2016 election. (RELATED: EXCLUSIVE: A London Meeting Before The Election Aroused George Papadopoulos’s Suspicions)

The FBI used at least three confidential human sources, or CHSs, for the investigation, according to a Justice Department inspector general’s report. At least two of the covert sources were deployed directly against Papadopoulos.

Papadopoulos, 32, was a primary target of the investigation, dubbed Crossfire Hurricane. His centrality to the probe is evidenced by his FBI-given code name: Crossfire Typhoon.

Wiseman also claimed to have received a visit from the feds, according to Papadopoulos.

“I get a frantic phone call from Jeffery where he’s like ‘dude, the FBI just came to my house. They’re asking a million questions about you,'” Papadopoulos told the DCNF, recalling Wiseman’s phone call from Feb. 17, 2017, which he also documented in his book, “Deep State Target.”

A day earlier, Papadopoulos met for the second time with FBI agents. Kevin Clinesmith, an FBI attorney, was present at that meeting. He has since been accused of manipulating an email during the process of obtaining surveillance authorization against Carter Page, another Trump campaign aide.

“‘They’re showing me pictures of me and you at a casino,'” Papadopoulos recalls Wiseman saying.

“He was acting like it was a shock,” Papadopoulos said.

Papadopoulos was initially concerned by his friend’s call, as it indicated that the FBI was more serious about investigating him than he previously knew.

But Papadopoulos now believes the phone call was just an act, as was the offer to buy a burner phone.

That’s because, according to Papadopoulos, Wiseman is the person identified as a confidential human source for the FBI in bureau transcripts released last month.

“The guy in the transcripts is Jeffery Wiseman,” Papadopoulos told the DCNF.

Papadopoulos says he vividly recalls those encounters because he had not seen his friends in years, and he rarely gambles.

“I was able to put two and two together,” he says.

Papadopoulos has mentioned Wiseman in several venues well before the release of the FBI transcripts.

Papadopoulos discussed Wiseman in his book, “Deep State Target,” and during a congressional deposition in 2018. He also told the DCNF more than two years ago about Wiseman’s claims regarding an FBI visit.

Papadopoulos at the time was not suspicious that Wiseman was working with the FBI. The DCNF was not able to track Wiseman down at the time.

Papadopoulos now questions why Wiseman offered him a burner phone, a pre-paid phone that is typically not registered in the name of the user. Papadopoulos wondered: Did the FBI intend to plant the phone with a recording device to monitor Papadopoulos’s phone calls? Or to paint him as engaging in deceptive behavior?

“It’s scary,” said Papadopoulos, who pleaded guilty to making false statements to the FBI during his initial interview.

“I think they were trying to get me in an obstruction thing, where I would tell them on a recorded line, ‘Dude, don’t talk to the feds.’ And then the feds would have used that as part of the obstruction of justice charge,” Papadopoulos told the DCNF in a phone interview last week.

During the interview with the DCNF, Papadopoulos reviewed his Facebook messages with Wiseman and discovered the burner phone offer.

“Oh, wow,” he said as he stumbled across the private messages, which he said he did not see when they were sent.

The IG report describes Papadopoulos’s meetings with the CHS, who is referred to as “Source 3.”

FBI agents contacted Source 3 — who Papadopoulos believes is Wiseman — after learning that he had a connection to Papadopoulos and had expressed interest in cooperating with the FBI during a previous investigation.

The IG report says the FBI “accelerated” the on-boarding process for the CHS “due to operational necessity.”

The operational need is not clarified in the IG report, though the election was held 10 days after Wiseman and Papadopoulos met.

The FBI transcripts show Papadopoulos and Wiseman making small talk through their three recorded encounters. They talked about their mutual friends, romantic interests, and career prospects. Wiseman also prodded Papadopoulos about some about his work on the Trump campaign and his interactions with foreign governments and officials, according to the transcripts.

The transcript of their second outing shows that Papadopoulos and the source met for lunch in Chicago before traveling to the casino. Papadopoulos told Wiseman that the Trump campaign was not working with Russia and was not involved in releasing Democrats’ emails published by WikiLeaks.

“You don’t think anyone from the Trump campaign had anything to do with fucking over … the DNC?” the source asked.

“No,” said Papadopoulos. “I know that for a fact.”

Papadopoulos also said Wiseman invited him on a trip to Las Vegas in January 2017, which a transcript published Thursday night also detailed.

“What I think was going on,” Papadopoulos told the DCNF, “they put Jeffery to make it look like I was a heavy gambler, and it would give them probable cause to say I was shady.”

Papadopoulos shared another message he received from Wiseman on March 15, 2017, which he now believes was part of the effort to throw him off his friend’s scent as a possible FBI informant.

“On the news, crazy shit according to CNN, but they always amplify everything,” Wiseman wrote in a private Facebook message. “Stay strong brother make sure you’re not being followed or watched everywhere you go — but I also [sic] don’t let paranoia get to you.” 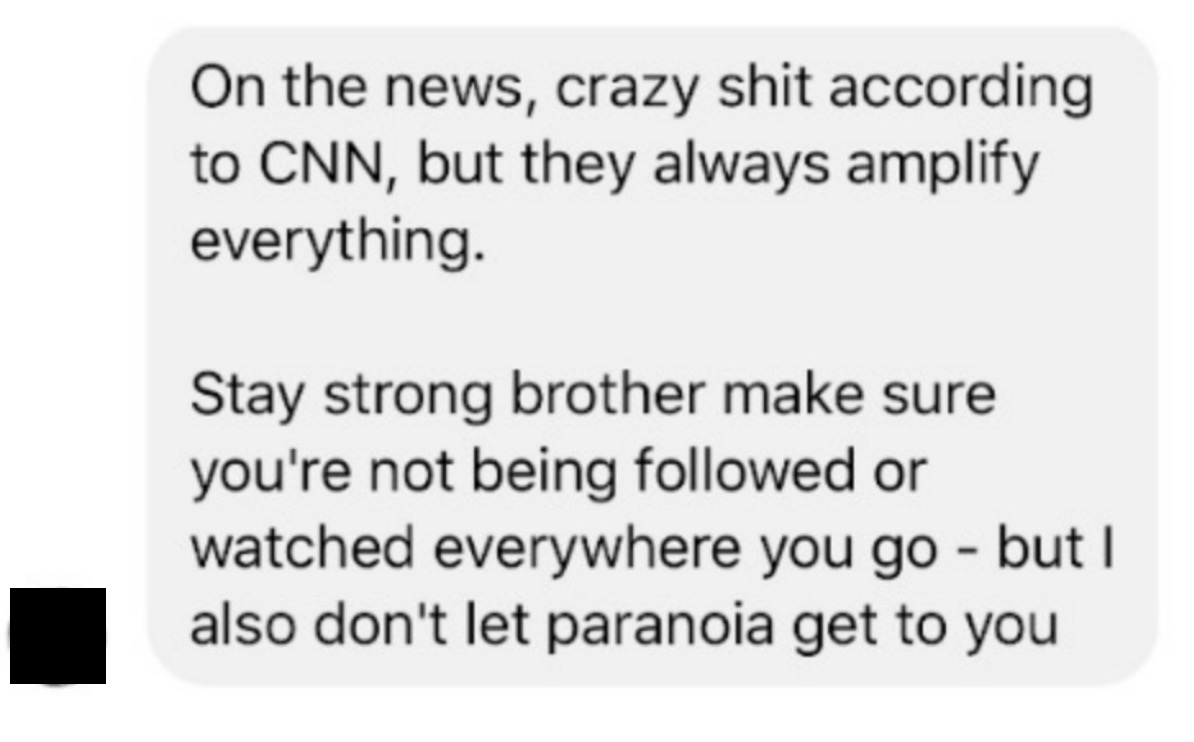 The FBI declined to comment for this story. Wiseman did not respond to phone calls and messages placed through his Facebook account. Efforts to reach him through friends and family members were unsuccessful. The friend who was with Papadopoulos and Wiseman on Oct. 23, 2016, who the FBI transcript identifies as “Omar,” also did not respond to repeated calls and text messages seeking comment.

The FBI used at least one other CHS in its operation against Papadopoulos, according to the IG report.

On Sept. 2, 2016, Stefan Halper, who was then a professor at the University of Cambridge, contacted Papadopoulos out of the blue to invite him to London to discuss working on a research project related to energy issues in the Middle East, Papadopoulos has said. He agreed to the offer and met with Halper and his purported assistant, Azra Turk, in London on Sept. 15, 2016.

Halper, who is identified as “Source 2” in the IG report, also had contact with Trump campaign aides Page and Sam Clovis.

As Wiseman did, Halper peppered Papadopoulos with questions about the Trump campaign’s possible involvement in the hack of Democrats’ emails, an FBI transcript shows. He also bragged about his links to former Russian spies. (RELATED: FBI Informant Bragged About Links To Russian Spies In Secret Recording Of Trump Aide)

Papadopoulos rejected the idea that the Trump campaign conspired with the Kremlin, saying that doing so would have been treason and therefore illegal, according to an FBI transcript of that recorded conversation.

The IG report said the FBI used Halper, who had been an FBI source since 2008, in hopes of recreating the conditions of a conversation Papadopoulos had on May 10, 2016, with Australian diplomat Alexander Downer.

Downer’s tip to the FBI two months after that meeting would spark Crossfire Hurricane, the FBI’s counterintelligence probe of the Trump campaign. Downer said that Papadopoulos mentioned to him over drinks at a London wine room that Russia might intercede to help the Trump campaign closer to the election.

Downer has acknowledged that Papadopoulos gave few other details of the supposed Russian offer, and Papadopoulos has said he does not recall mentioning Russia to the diplomat.

The special counsel’s team ultimately found no evidence that the Trump campaign conspired with the Russian government. There was also no evidence that any Trump associates took part in the hacks of Democrats’ emails or helped disseminate them through WikiLeaks.

Papadopoulos ultimately pleaded guilty on Oct. 5, 2017, to making false statements to the FBI regarding his interactions with a mysterious Maltese professor named Joseph Mifsud. Papadopoulos, who received a 14-day jail sentence, told the FBI in his first interview in January 2017 that Mifsud had approached him in early 2016, and mentioned that Russia had emails pertaining to Hillary Clinton.

As part of his plea deal, Papadopoulos said that he gave inaccurate statements about the timing of his interactions with Mifsud. He initially claimed that he met Mifsud prior to joining the Trump campaign in March 2016.