Democratic Michigan Gov. Gretchen Whitmer told a reporter that she doesn’t “have proof” that coronavirus is being spread in rural areas because of large gatherings of protesters in the state.

During an appearance on ABC’s “The View” earlier Wednesday, Whitmer said anti-lockdown protesters making a “political statement” return home and increase “the risk of perpetuating the spread” of the virus.

“These protests, they do undermine the effort, and it’s very clearly a political statement that is playing out where people are coming together from across the state, they are congregating, they’re not wearing masks, they are not staying six feet apart and then they go back home into communities and the risk of perpetuating the spread of COVID-19 is real,” she said on “The View.” 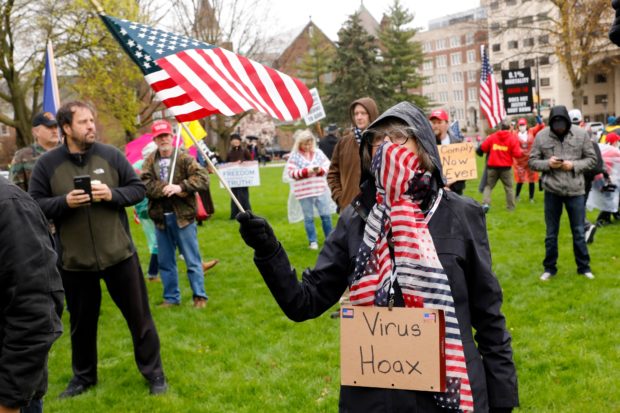 Whitmer was questioned later at a press conference about whether she has “proof” of the claim.

“I don’t have proof,” she responded. “I’m not following everyone home and taking their temperatures and watching their lives for two weeks, but here’s what we know, when it comes to COVID-19, the way that it spreads is person-to-person contact.”

“It can stay in the air for a while,” she continued, according to WSJM. “It is when you’re touching one another, and we saw a lot of that at these protests at the Capitol.”

Whitmer reportedly referred to a group that tracked cell phone data from protests, then tied it to “hot spots in rural parts of Michigan,” but also said she doesn’t “know the group” that produced it and “can’t vouch” for the data. Nevertheless, she added that it “would not be a surprising outcome if that were the case.”

Meanwhile, cell phone data reported by The New York Times showed 1 million Michigan residents began moving around the state after Whitmer extended her lockdown order May 1. (RELATED: ‘Gretchen Whitmer Is A Ghoul’: Tucker Wonders Why ‘People Rotting In Wheelchairs’ Is Allowed But Abortion Is ‘Essential’)

WATCH the press conference below via NBC News: