The New York Times’ list of 1,000 coronavirus victims displayed at the top of its Sunday edition included the name of at least one individual whose death reportedly had nothing to do with the pandemic.

The outlet, however, removed the name and reposted the list via Twitter along with a correction notice:

Correction: Earlier editions of Sunday’s front page included at least one name in error. Our original tweet containing an image of that front page has been deleted and replaced with an image of the late edition.

At least one Twitter user caught and posted the mistake:

The Times told Business Insider that “a team of editors and three graduate student journalists — compiled the details from online obituaries and death notices that included COVID-19 as the cause of death.”

One purported victim, 27-year-old Jordan Driver Haynes of Cedar Rapids, Iowa, was described by the Times as a “generous young man with a delightful grin.” The outlet quoted the phrase directly from Haynes’ obituary. 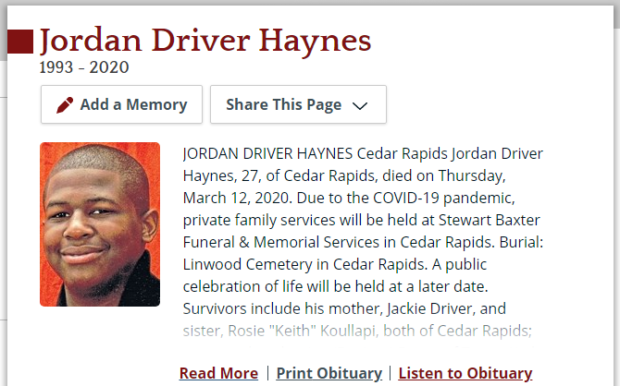 While the obituary also explained that private services were held “due to the COVID-19 pandemic,” the likely explanation for how Haynes’ name appeared in the Times’ search for coronavirus victims, Cedar Rapids radio station KHAK cited his suspected actual cause of death on their website.

“The Cedar Rapids Police Department says a man found in a vehicle along I-380 last week was murdered,” KHAK reported. “According to a media release, an autopsy on 27-year-old Jordan Haynes ruled his death was a homicide. No other information has been released as there is an active investigation in the case.” (RELATED: REPORT: Colorado Man Who Died Of Alcohol Poisoning Classified As Coronavirus Death)

The Daily Caller has reached out to the Times for comment.