Republican South Carolina Sen. Tim Scott responded Wednesday to the criticism he has received for drafting police reform legislation after the death of George Floyd.

“Not surprising the last 24 hours have seen a lot of ‘token’ ‘boy’ or ‘you’re being used’ in my mentions. Let me get this straight…you DON’T want the person who has faced racial profiling by police, been pulled over dozens of times, or been speaking out for YEARS drafting this?” Scott said on Twitter.

“And don’t throw ‘you’re the only black guy they know’ at me either. There are only two black Democratic Senators, stop pretending there’s some huge racial diversity gap in the Senate. Ask my Dem colleagues what their staffs look like…I guarantee you won’t like the answer,” Scott continued.

This comes one day after Scott laid out what will be in the Republicans’ police reform legislation being drafted in response to the nationwide protests over Floyd’s death.

And don’t throw “you’re the only black guy they know” at me either. There are only two black Democratic Senators, stop pretending there’s some huge racial diversity gap in the Senate. Ask my Dem colleagues what their staffs look like…I guarantee you won’t like the answer.

Senate Majority Leader Mitch McConnell appointed Scott to lead the party’s effort to pass a police overhaul bill before July 4. The South Carolina senator has ruled out including a revision to qualified immunity — a key measure supported by Democrats. (RELATED: Republicans Silent After Trump Suggests 75-Year-Old Protester Injured By Police Was A ‘Set Up’)

Scott told reporters Tuesday after meeting with McConnell that the bill would include a “notification act so that we can understand and appreciate the 30,000 plus no knocks that happen around the country to see where they’re happening so we have more information.” It will also include anti-lynching legislation that was stalled by Republican Kentucky Sen. Rand Paul last week in the Senate.

“Also part of it has to do with the use of force that leads to death or serious bodily injury, collecting more data,” Scott said. “Right now about 40 percent of the police departments are reporting to the DOJ through the FBI. We’d like to see all the agencies report so we’re going to provide either resources for it or perhaps reduce grants if they don’t.” 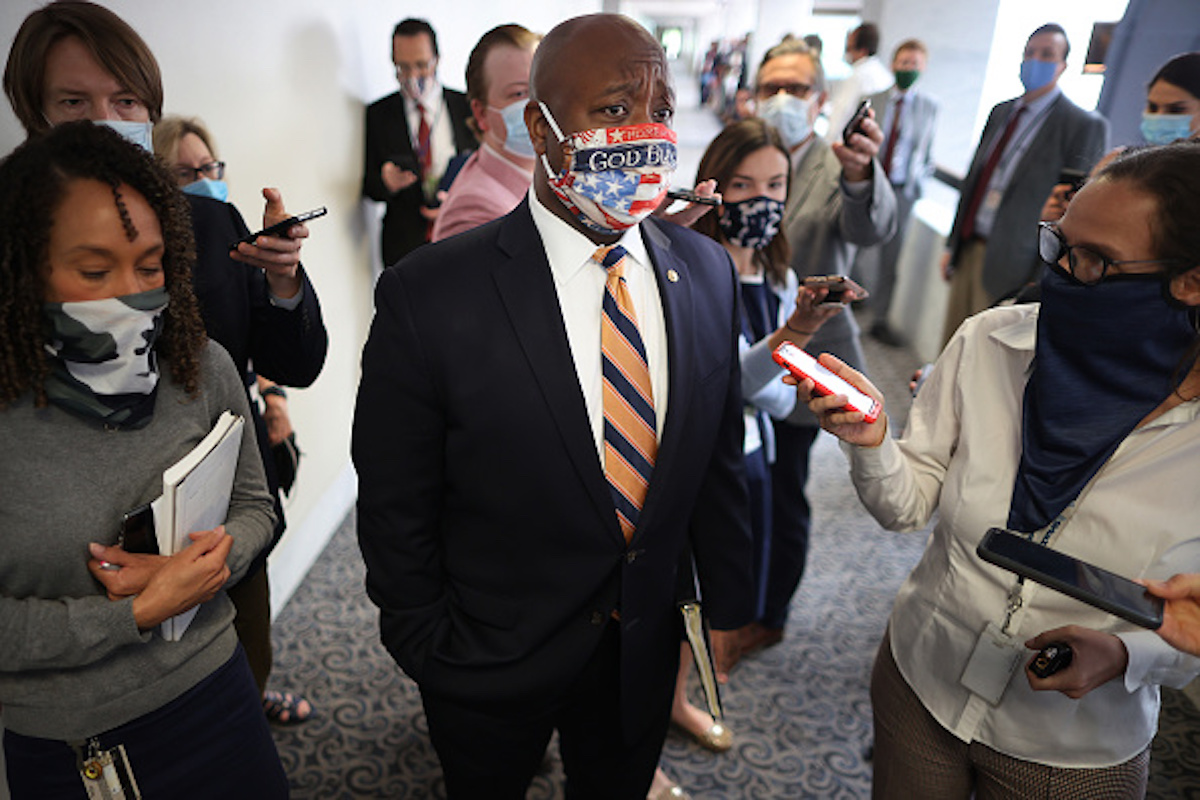 “There’s a lot of talk around the use of body cameras and the importance of doing so,” he said. “I think right now we fund under 20 million. I’d like to see that number grow significantly and some penalty if you’re not using the body cameras, there’s de-escalation training, perhaps bias training, the establishment of a National Police Commission study so that we can figure out best practices that can be used across all departments that we would at least direct funding and resources towards in that direction.”

Scott added that he’s hopeful Republicans will be able to cooperate with the Trump administration to see the legislation move forward, despite being on a “separate track from the White House.”

“We are on a separate track from White House,” Scott told reporters. “I have been talking with folks in the White House about the track they’re on as well, certainly there is a way for us all to work together, but we’ve been in discussion with them for several days.”